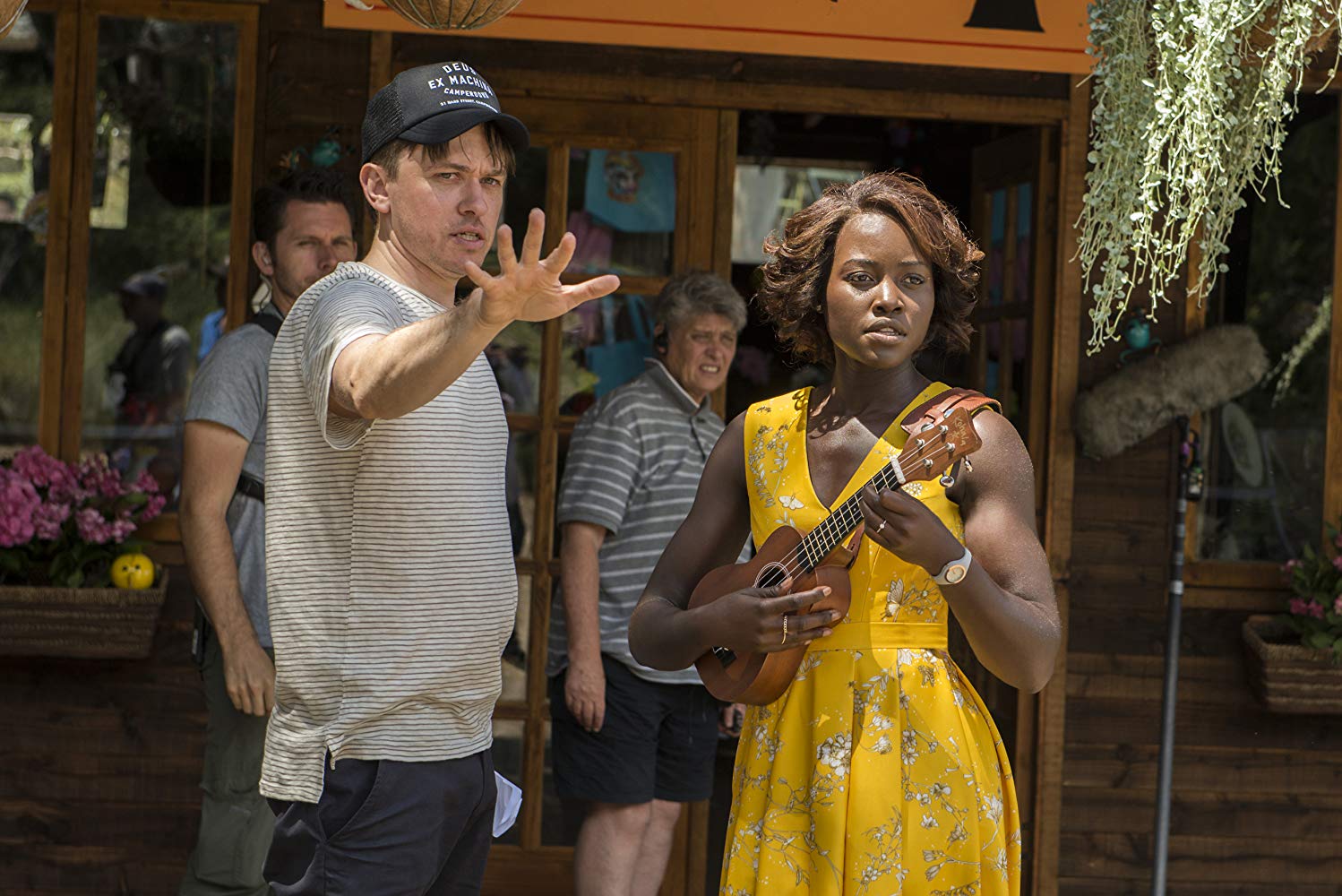 Comedy-Horror, Little Monsters, starring Lupita Nyong’o, tells the story of a washed-up musician, who teams up with a teacher and a kids show personality to protect young children from a sudden outbreak of zombies.

Liselotte Vanophem: Hi Abe, how are you?

LV: Congratulations on Little Monsters. How did you come up with the peculiar story of this film?

AF: Well, it was based on my son’s first year of kindergarten. My son has multiple life-threating food allergies just like Felix in the movie. Before he went to school, he had never been out of my care. It was a terrifying thing when it happened. I had to trust his health and safety to someone else. Luckily he got the most incredible kindergarten teacher who wasn’t only able to look after his health but who also opened up his eyes to the world for the first time. It made me realize how important teachers are, specifically kindergarten teacher.

The story was also based on the time when I was on a school excursion with my son’s class and his teacher. It was me, the teacher and 25 five-year old children going to a zoo.

There was something that happened during that school excursion that gave the idea of “what if the animals were zombies?” and “if it was a zombie, how would you save those little children from a zombie apocalypse?”. Questions like “how would you stop them from being eaten?” and “how would you stop their mind from being corrupted?” also popped-up. The characters and the story of Little Monsters grew from there. It’s a love letter to my son and everything he taught me about the world through his eyes.

AF: Way too young. He’s eight now. He played a zombie in the movie and had a great time doing that. He saw parts of the film already and keeps on asking why he can’t see the full film. The whole point of this film is shielding your children from the horrors of the world.

LV: After you finished the story, how did the cast come together?

AF: I’ve worked already together with Alexander England, who plays Dave in this movie. I always knew that he would be the right person for that role and was cast first. We had nine names to play the role of Miss Caroline and a lot of them were really good. We just started pre-production and had seven weeks before shooting. My US casting agent was confident that we would get one of those people. We had to think about the one we really wanted.

For me, Lupita [Nyong’o] was the first person that came to mind. We weren’t fully confident that we would get her for this but we thought we would try. We did send the script to her agent. Timing-wise it was perfect because she was looking for something different. She wanted to do a comedy. Her agent put the script in front of her, she read it and responded. 24 hours later I was talking to her and 24 hours after that she was on board. It happened remarkably fast. She responded to the truth of the character and not because she wanted to go to Australia and do a zombie movie. It was an amazing turn out of events.

When she said yes, it was unexpected but so affirming for me and the crew because she responded to the things that I wanted to say with this movie. Both my cast and crew were incredible and of high calibre. For example, the make-up team who did the zombies already won an Oscar. We didn’t have a big budget by any means and people were just there because they believed in the movie.

LV: How many extra cast members did you have? Because by the end of the movie, there were a lot of zombies present.

We made the call for zombie extras and despite they weren’t getting paid for it, they got full zombie make up applied by Oscar winners. We reached out to people during a zombie walk through Sydney and some crew members went to hand out some flyers.

In the end, they were way better than some extras we paid because they just wanted to play a zombie in this movie. For me, it’s so much better to work with people like that because they gave it 110%. We got thousands of zombie extras in this movie and so we wouldn’t have been able to afford to pay a tenth of that.

LV: In this movie, Shake It Off from Taylor Swift is used many times. Whose idea was it to use that song?

AF: This song was part of my son’s kindergarten “end-of-the-year” show. A ukelele band and some children came out and they played that song on the Ukelele. I had never heard this song before or at least not like that. I remember turning to one of the parents and asking what that song was. They were like “Oh, it’s Shake It Off. A Taylor Swift song”. I went home and I put it in the script. It was so specific and it worked great for the story, especially hearing it being played on the Ukelele.

We tried for six months to get the rights of that song but we couldn’t get it through her either. The record label came back at some point and mentioned that using this song would cost a certain amount of money. We weren’t able to afford that. It was just a nightmare. When Lupita came on board, she mentioned that the song was one of the elements that appealed to her. It was also a very significant song in her life at one point. She, just like me, mentioned that she didn’t want to do the movie without that song in it.

Lupita said that she met Taylor once and that she was going to write her a letter. She wrote Taylor this e-mail and 24 hours later we had the rights to the song.

It was amazing! It just felt like it came all together: Me hearing that song at my son’s show, the connection I had to the song and Lupita coming on board. We wouldn’t have the song if it wasn’t for Lupita.

LV: There are a lot of things elements in this film: The many extras, the difficult make-up, etc. What was the hardest part of making this film?

AF: It was working with eleven five-year-old children. That by far was the hardest part. Though as well, that was also the whole point. We had to protect these children and engineer the events in this movie in a way that they could react to something that they saw for the first time. All the reactions are authentic and there are very few “take 2’s” in the movie.

It was important for me that the children were all five years old because that was the age my son was and it reflects how five-year-olds react. How and what they see in the world. We couldn’t fake that with children who were seven or eight who might look younger. When they become six, they just start to change.

LV: The schoolchildren you had for this movie was it a real class?

AF: No, we did ensemble the kids separately. We saw over 700 kids for those eleven roles and the casting took three months. We had those big workshops with them to prepare them to work on the movie and also testing their patience. Over those workshops, we just would lose kids because they didn’t the focus.

During the filming, we could only get the kids for four days and five hours each day. There also had to be a break in between those hours. Between nine and ten in the morning was when their focus was the best. They’ve woken up and had something to eat but they hadn’t been distracted yet by a lot. After that, we would gradually lose their attention. At the start of every day, we needed to be ready for that hour’s timeslot and just get everything that we wanted for them in that hour.

LV: Your son is in this movie as a zombie. Are you in it as well just like in your previous film Down Under?

AF: Oh no way! The only reason why I was an extra in my previous film is that it was a scene involving someone that never acted before. He has down syndrome and is also in Little Monsters. During one of the key scenes in Down Under, someone has to abuse this down syndrome character. The only reason why I put myself in that scene was that it would make him feel better as it was only his second day on set. As supposed to some stranger who you just met and who has to abuse you right after that. It was more out of necessity and I would never do it again.

LV: Let’s say that if your son comes to you in ten years or so and mentioned that he wants to be a filmmaker. What would you say to him?

AF: I had very supportive parents and were very encouraging me to become a filmmaker. I would be happy for my son to do whatever his passion takes him to. If you want to work in the film or entertainment industry, you have to be prepared for work long hours and also being broke. I’m trying to get my son into coding because he’s very interested in that. I always tell him that that’s going to be the future. I’m trying to push him into that area but at the same time, you also have to let them do whatever they want to do.

LV: So where did your passion for the film come from?

AF: Especially from the early Peter Jackson films and his Bad Taste. Basically everything before Lord of the Rings. I was like “That’s what I want to do”. It became an interest and now I don’t want to do anything else. As hard as the film industry is, it’s so much fun to get people together to work on something and to have a common goal. It’s working on projects that you’re passionate about instead of just doing it for the money.

LV: So how does it feel for you to see people their reaction after they watched your film?

AF: It just feels amazing! I was very proud of the last film I made because it was the exact kind of film I wanted to make. Even when you make something that you do believe in and you’re proud of, it’s still luck of the draw. To be able to travel around the world and share your film with people is just an amazing experience.

The fact that people are responding in their way to the universal things that my son taught me is just been wonderful. The point of making this movie was to show the best and the worst of human behaviour. I couldn’t show one without the other. Ultimately it’s a really sweet movie. I’m so very lucky to be in this position and I never take it for granted.

LV: Do you already have other films coming up?

AF: Yeah, I’m doing something that we will hopefully start shooting next year in Australia. It’s a sci-fi film but with characters that shouldn’t be in a sci-fi film. We use that genre to make a statement about how the world is right now. We have a bigger budget for that than we had for Little Monsters.