The story follows disgraced children’s puppeteer Philip (Sean Harris), returning to his childhood home of
Fallmarsh, Norfolk, intent on destroying Possum, a hideous puppet he keeps hidden inside a brown leather
bag. When his attempts fail, Philip is forced to confront his sinister stepfather Maurice (Alun Armstrong) in
an effort to escape the dark horrors of his past.

We had a chance to chat with writer / director, Matthew Holness, to talk about his debut feature film, his inspiration behind the film, it’s unique soundtrack and much more…

Big Picture Film Club: What were your influences in developing the film?

Matthew: Possum was originally a short story, it was never really the intention to develop it as a film, but I was really interested in a lot of the old silent horror films from the 1920’s – German horror films like Nosferatu, M & various others. I fell in love with those films because they seem to be able to deal with characters with extreme psychological states. A lot of those films are about the First World War, there are so many things going on in those films, but at a level below the surface.

I just thought how could you make a silent horror film for a modern audience. What kind of film would it be? And would it be possible to do that? I knew I had this story I had written called Possum, which was about a character that had gone through something so traumatic that he really couldn’t talk about it. He just constructed a puppet to deal with that trauma and that felt to me like a classic scenario for a silent horror film.

Big Picture Film Club: How was it like working with the [BBC] Radiophonic Workshop? And how did their involvement shape the mood and tone of the film?

Matthew: They are part of the old BBC Radiophonic workshop, they’re not BBC now. They’re their own entity. They came on board during the editing process because my editor, Tommy Balding, and I had been putting temporary music tracks on the footage and the tracks that really worked well were old tracks by the Radiophonic Workshop (when they were the BBC Radiophonic Workshop). There were some old Delia Derbyshire tracks that we were putting over some sequences and they just really captured a mood and strange, other-worldly atmosphere that fits perfectly with Philip’s world. The geography of his mind just seems to come alive with this music.

I tried to license the tracks so we could use them in the film, but during that process, my musical supervisor, Phil Canning, said that that he knew the radio radiophonic workshop was looking to score a feature film, so he set up a meeting. They watched the film and saw what music that we were using as temporary tracks. Luckily, they found it was appealing enough to want to score it. I couldn’t believe it when I found that out, it was an incredible bit of news, but it kind of fit so perfectly. They were just the perfect fit for the film and the character of Philip – and his headspace. 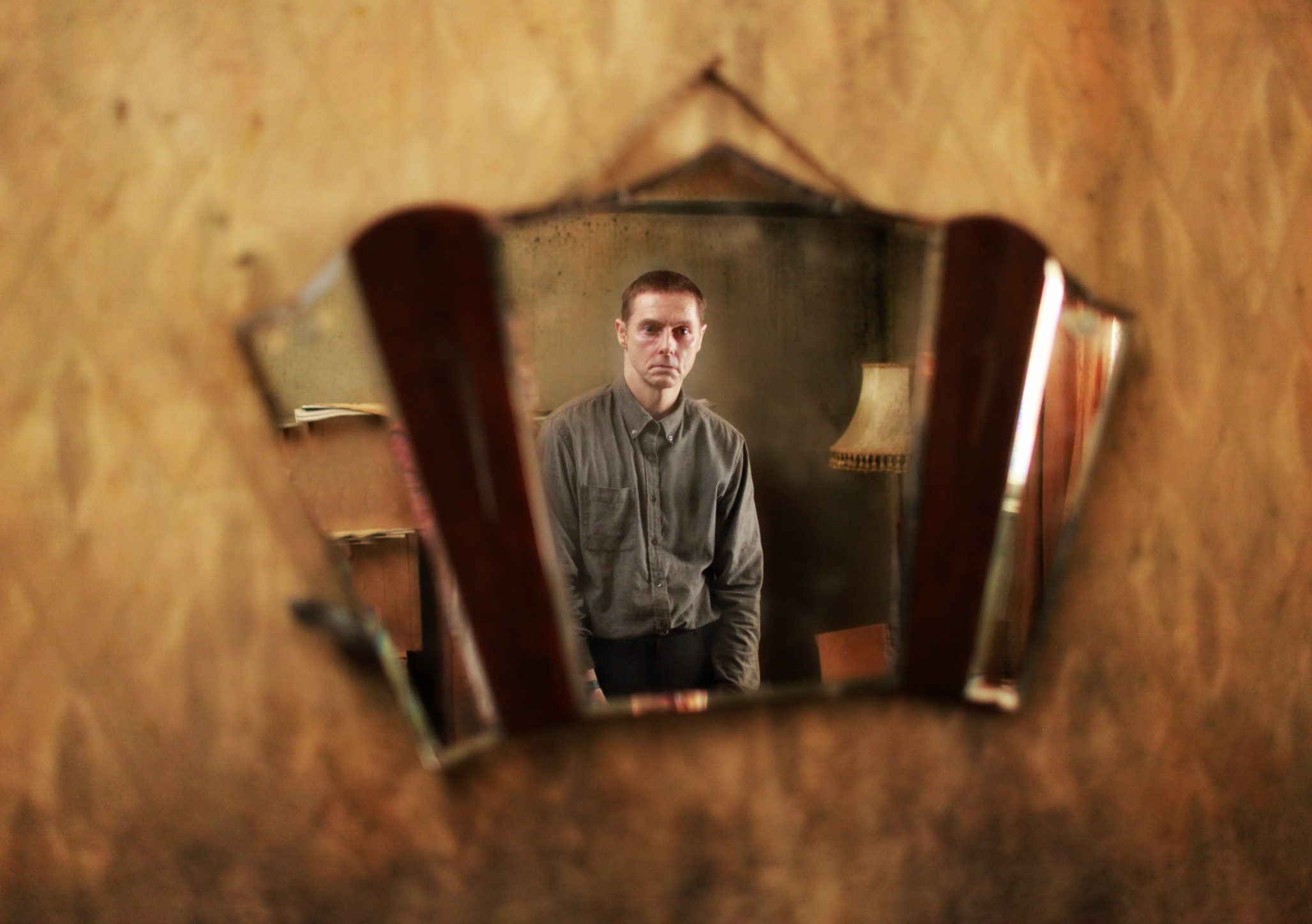 Sean Harris as Philip in Possum

Big Picture Film Club: This is your debut feature as a writer / director, did you find it daunting stepping from in front of the camera to behind the camera? And from a production standpoint how did that transition feel to you?

Matthew: I’ve done three short films beforehand, so I wasn’t daunted by the prospect of directing. However, directing is always a nerve-wracking experience. I certainly get pre-production nerves, as I think anyone does, but actually, far fewer nerves than acting because I just inherently feel directing is more my thing than acting. So I felt far more comfortable directing and writing than I do acting. It was nerve-wracking, but it wasn’t daunting in that sense in that I had previous experience. Having said that the scale of a feature compared to a short, you don’t really get a sense of how different it is until you’re actually filming.

I would say in terms of pre-production it’s still the same level of intensity, in that you have to do all the same sorts of things, and in fact the amount of work you have to put in on a short film is not far off the same amount of work you have to put on to a feature. So pre-production [for a feature film] is not necessarily any more difficult than it is for a short film. Certainly when you’re actually filming then you really do encounter just the depth and length of the entire process; a 4-week shoot is far more than a 3-4 day shoot. You learn to pace yourself, you have to find physical and mental stamina that isn’t necessarily an issue on a short film. You kind of get into the swing of it after a few days, then it’s business as usual and all the nerves go away when you’re making the film.

Big Picture Film Club: A lot of elements of the film are quite spare, like the lack of dialogue or the environments chosen. This places a lot more emphasis Philip [Sean Harris] & Maurice’s [Alun Armstrong] relationship. How was it like building that dynamic between them and showing that sense of shared history together?

Matthew: First & foremost the film is about loneliness, as well as other things, but it was important to locate Philip in a space and in a world where he has no communication with anyone. Therefore he’s shot in very lonely places, those are the places he actively seeks out. The only real communication he with anyone is with Maurice and it’s a very unhealthy and tense relationship. What they say to each other isn’t necessarily what they’re thinking or feeling. It is a relationship that in its current state is out of sheer habit; it’s a very antagonistic, passive-aggressive, relationship.

When it came to actually put the two characters together on screen, the tension really comes from the fact the Sean and Alun didn’t communicate off-screen. Sean’s a method actor and part of the process for him was that he didn’t want to engage with the outside world at all. He was in character, he didn’t want to engage with Alun, so you’re really seeing them only get together as those characters. On-screen you’re really just seeing these two characters engaging in this fictional world, so that contributes to that intensity. It’s a very powerful method when it works like that, it’s interesting to watch, and very tense to watch and edit together. I think a lot of that comes from Alun and seans approach to the material.

Big Picture Film Club: Lastly, from its festival screenings, how have you found the reaction to the film? Were there particular reactions that you weren’t expecting that surprised you?

Matthew: Not really, you never know what an audience will make of something until you put it in front of them, so I was sort of apprehensive. I wanted two things to work: one, that they felt for Phillip despite him being an initially unlikeable character, I was very keen that they did feel for Philip. And two, I wanted it to be scary and there was no guarantee of those two things going in. Luckily, it feels that the audiences do empathise with Philip and they are interested in him. And I think they do stay with him and stick with him, there’s a kind of endurance test with Philip, and those who do stick with him and feel for his predicament I think really root for him and really like the film.

It’s about a very difficult subject and I think unless audience members feel for someone who’s gone through something like that it’s potentially not something that they can inherently connect to. I’m glad that audiences have come out and really rooted for him, to varying degrees, but it’s certainly a reaction I’ve felt from them. I’m pleased that it frightens people, it seems to get under peoples skin and that was always the intention. It’s a grimy, gritty sort of film, it’s not supposed to be nice, it’s not supposed to have a happy ending, because there isn’t closure for victims that have gone through an experience like that. It was important not to make it a cinematic happy ending because that wouldn’t be truthful to the subject. It’s an unpleasant film, it’s probably a film people won’t watch twice, but that’s the intention behind it. It is supposed to take you to a place where that’s covered up and brushed aside, that’s really lifting the lid off something unpleasant and that’s the point of it.

5 Movies on BBC iPlayer That Will Make You Smile