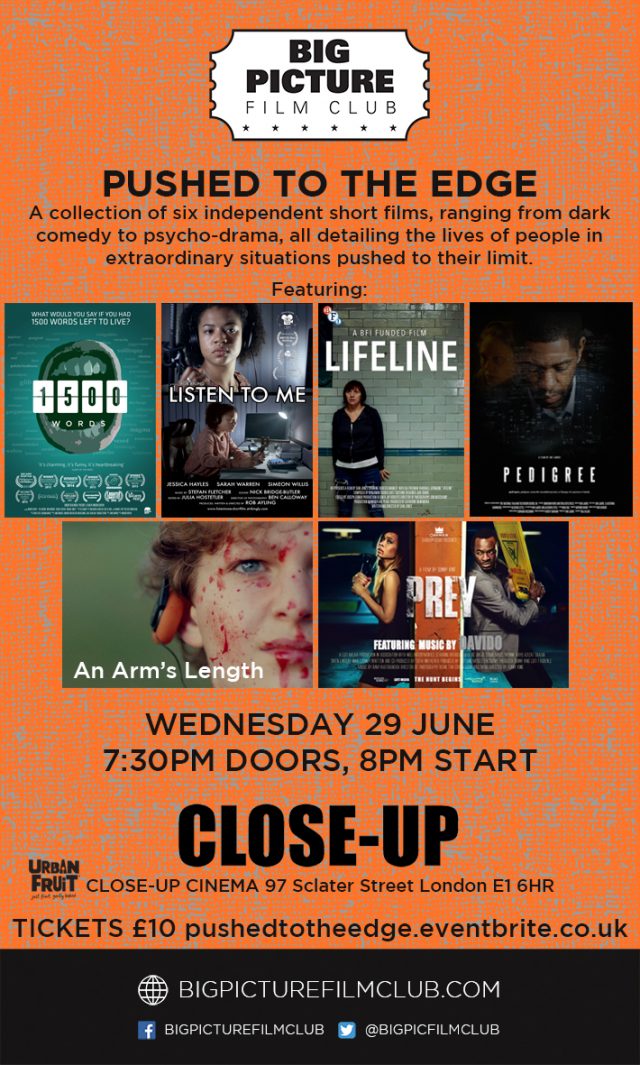 Big Picture Film Club is back! Pushed To The Edge is a collection of six independent short films, ranging from dark comedy to psycho-drama, all detailing the lives of people in extraordinary situations pushed to their limit. Here’s a list of the films we will be screening:

* 1500 Words (Dir. Andrew Chaplin): 1500 Words is the dark and comedic tale of one man’s struggle to keep his relationship, and himself alive whilst using his final one thousand five hundred words. When everyman Stanley Franks goes to his doctor to receive his test results, he’s told the brutal and surprising news of how long he has left to live. Shell-shocked and overwhelmed Stanley has to work out pretty quickly how to adapt to life with his new restrictive affliction. Life will never be the same again… or will it?

* Lifeline (Dir. Sam Jones): Lifeline is a BFI funded short film, from the 17-year-old director, Sam Jones, which follows a mother in a desperate mother risking everything to provide a final lifeline for her son. In raising the stakes, by putting lives on the line, Beth’s selflessness and need to care for her son is truly challenged whilst trying to protect her son.

* Pedigree (Dir. Ani Laurie): In the city of London, Alex Powell is a successful 30-something banker running away from his past. When an injured young woman arrives at his front door his world spirals out of control.

* An Arms Length (Dir. Max Weiland): Leonard (Jamie Goldberg) is trapped between his yearning for freedom and his deep tie to his mother (Alexis Zegerman).  An Arm’s Length is a dark and unsettling British comedy about a Jewish mother’s relationship with her son. Steeped in the traditions of Jewish humour and folklore the surreal finale becomes a metaphor for the cliché of the castrating mother.

* Prey (Dir. Sunny King): A young woman, after a night out, is stalked by a psychopath in a car park. Prey is an Alfred Hitchcock-inspired film filled with suspense and horror. The film features Africa and Britain’s brightest stars Weruche Opia, OC Ukeje, Steve Mace, Yvonne Hays and Azizat Saadiq. Prey is directed and executive produced by Sunny King. 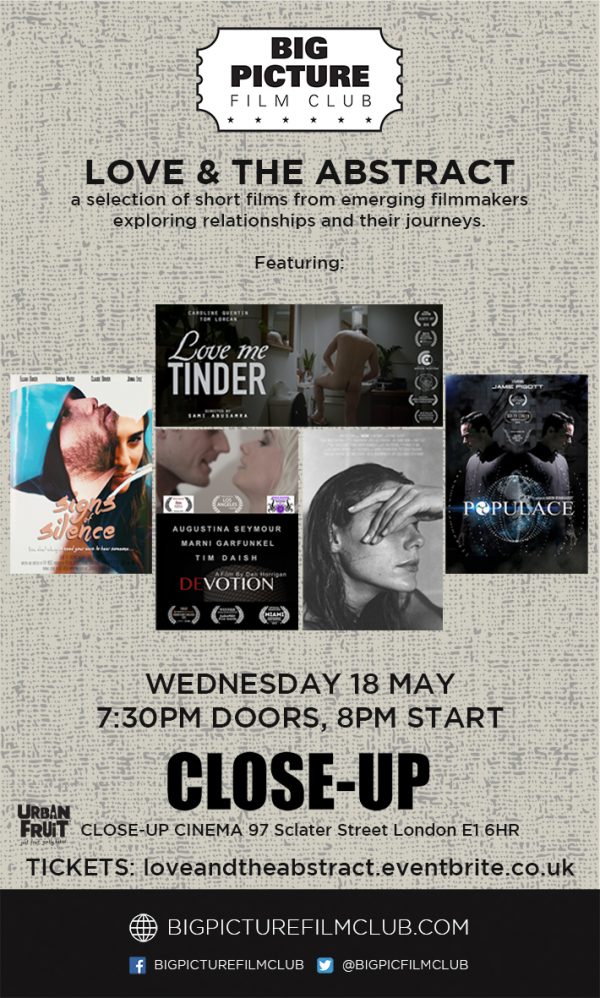 Big Picture Film Club is back! Our next event, Love & The Abstract, is an exploration of relationships, love, and the difficulties they have to overcome. We have curated a list of 5 short films, from an array of talented filmmakers, each tackling a unique perspective on love and relationships. Check out our film list below:

Signs Of Silence [@SoSilenceMovie] (Director, R.M. Moses) – Born into a world of silence, Eli finds himself not able to communicate well with people. Mainly because not everyone understands sign language. This has impacted his self-esteem and confidence. This is Eli’s story of how difficult life can be when you aren’t being heard.

Anchor [(Director, Madeleine Morlet) – Although Joni isn’t emotionally available she needs the comfort and support of Olivia. In seeking this understanding she allows a situation of forced intimacy to evolve and despite there being much tenderness between them it is clear that their expectations of one another are not matched.

Devotion [@Devotion_film] (Director, Dan Horrigan) – Devotion is an exploration of grief, and love gone dark. It’s a story about the human shadow, how it can overwhelm us if we don’t learn to live with it.

Love Me Tinder [@LveMeTinderFilm] (Director, Sami Abusamra) – Love Me Tinder is a dark comedy about an encounter between two lonely strangers. A man spends an awkward evening with an older woman after they match on a dating app. Meeting each other is easy, but as their night progresses connecting proves to be much more difficult.

Populace [@Populace_film] (Director, Dan Horrigan) – Set in 2097 it follows a day in the life of John, a clone who works for the Tyrannical, Orwellian “Populace” corporation. His world is turned upside down when he is forced to choose between the woman he loves and the reason he was created. 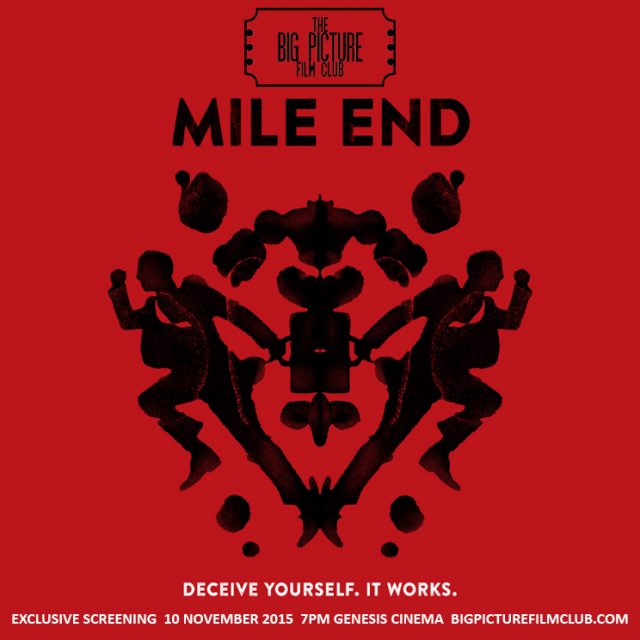 For our next event, we’ll be screening Mile End at Genesis Cinema, on Tuesday 10th November, 7pm.

After being forced out of his job, London executive Paul Kerr (Alex Humes) is left doubting his future until he runs into John (Mark Arnold), a friendly American who seems to have all the answers. They both agree that life isn’t fair and John comes up with a radical plan to turn Paul’s life around. But when a young banker (Valmike Rampersad) is found murdered, Paul begins to question what John really wants.

Sixteen-year-old Billie’s reluctant path to independence is accelerated when her mother reveals plans for gender transition and their time together becomes limited to Tuesday afternoons. Filmed over the course of a year, once a week, every week (only on Tuesdays) these unique film making rules bring a rare authenticity to this emotionally charged story of desire, responsibility and transformation.

The ticket line is now officially open for the screening of Nightbus on July 23rd! 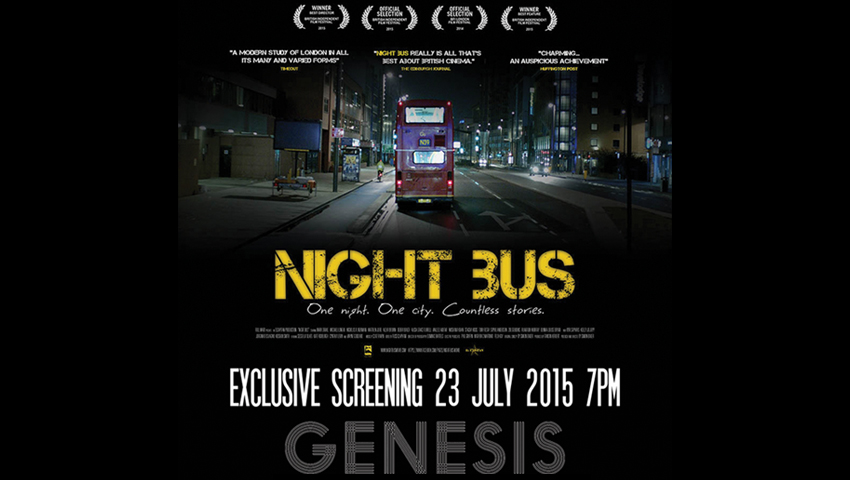 The Big Picture Film Club launches with the exclusive screening of Night Bus, the debut feature from British independent film-maker Simon Baker. on 23rd July 2015 at the Genesis Cinema in Stepney Green.

Set entirely on a London night bus during one journey, on one night, Night Bus is an intimate, poignant and often funny portrait of London’s characters of the night.

The Night Bus is populated by a variety of characters – the drunks and revellers, workers on the late shift, young and old, introvert and extrovert, lovers and fighters. This is about their journey, how they make it through the night, relationships end and relationships begin, but whatever happens, the bus continues to its destination.

The film has already garnered much acclaim on the festival circuit, most notably winning “Best Feature” and “Best Director” at the 2015 British Independent Film Festival.