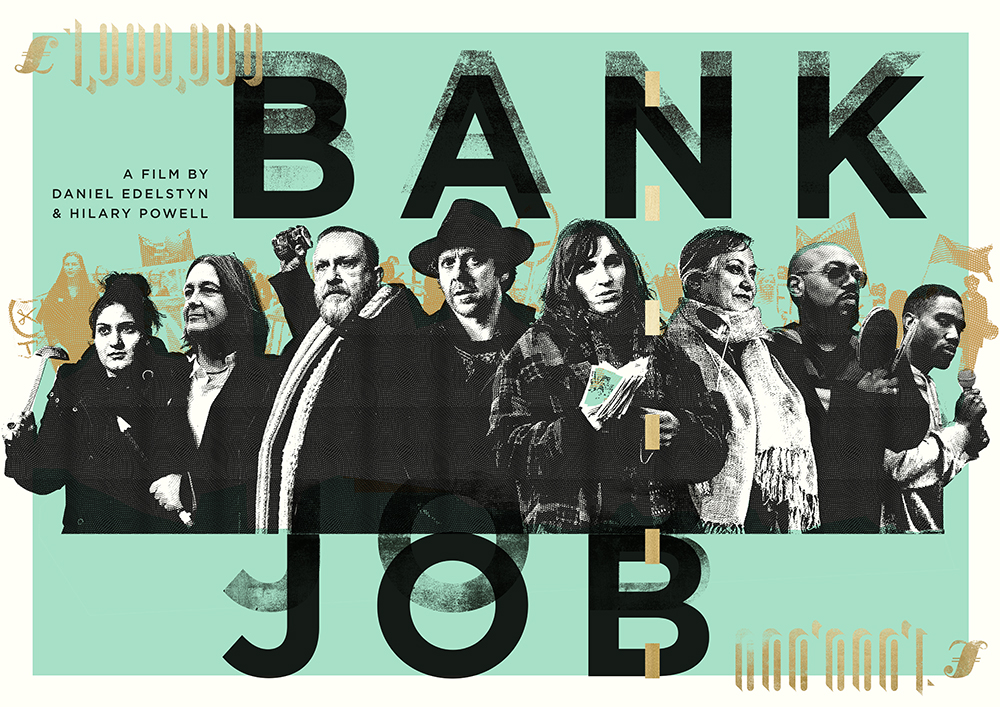 Setting up their own community central bank in Walthamstow, East London, Hoe Street Central Bank aims to print its own money to fund local debt relief. They’ve currently raised just over £30,000 to buy back local debt. The documentary, Bankjob follows the journey of this community project and demystifying money…

We spoke with Dan Edelstyn to discuss Bankjob and financial literacy…

Big Picture Film Club: What have you found is the biggest misconception people have around money? And do we have a problem in our society regarding financial literacy?

Daniel Edelstyn: Yes – we believe that the misconceptions around debt and money are the driving factors of our entire lives – and that mass education in these areas could drive huge change.

97% of all money in circulation is created as interest-bearing debt – by private banks, the systematic deregulation of the banks has caused a huge increase in the amount of money – and therefore debt in circulation. Most of this money is created for mortgages – which is a non-productive economic asset, not creating more jobs etc – just creating asset – read house inflation – and boom and bust.

A group called Rethinking Economics have been amazing at demanding a change to the curriculums of the economics departments across universities in Britain – after they observed that none of their courses answered or spoke to the causes of the 2008 financial crash they were living through whilst at universities. It remains true that most economics courses are still based on antiquated ideas which have been largely agreed on to be out of date.

We’re at an exciting time though with economic literacy, there is a ‘new economics movement’ which seems to be sweeping across Britain – however, we’re still on the fringes. These questions need to seep into the mainstream conversation, as we believe that most of the population remain illiterate to the main economic drivers that affect their lives. They need to get over their fear of the subject – and educate themselves actively. Positive Money did a poll among politicians in Nov 2017 and found that a staggering 85% of them didn’t understand where money comes from – imagine what the percentage of normal – less educated people across Britain and in fact the entire world must be – but the story of where money comes from and the power to create it are what are effectively the driving seat of our political system..

BPFC: How did the idea for Hoe Street Central Bank [HSCB] come about?

D.E: We heard about the group Strike Debt, who had bought up and abolished millions of dollars worth of student and medical debt in the US. It was intriguing, they seemed like outlaws and there was something exciting about them – at the time, like most people, my only understanding of debt was that it was a bad thing to incur and that if one did get into debt – the only moral thing to do was to pay it. What Strike Debt did more than anything, was to challenge the received wisdom of what they called ‘payback morality’ and to shine the beam of enquiry up to the top. And to highlight the fact that the powerful economic elites never paid their debts, but that payback morality was, in fact, something always aimed at the people at the bottom, those least able to repay. One of the founding members of the group was Professor Andrew Ross, and reading his book Creditocracy was very inspiring – it was like a secret history of debt and indebtedness, and in it, he was arguing that our western democracies were being systematically stripped away and eroded. In the place of this, a new system was being built – a creditocracy – where access to the basic social goods provided under ‘welfare democracy’ was now being accessed by credit. The case seemed compelling to me, but I was worried by how fringe this all was, I mean it was of central importance to us all – but only being discussed by small indie publishers.

Anyway there was the basic nutrition or the compost – what then started to happen was more investigation, more reading, interviews, a trip out to meet Strike Debt in Los Angeles and NYC, and then gradually a cinematic and artistic response began to percolate and come together. At first, this was me with my director of photography Christophe – and Hilary was back in London working on her projects, but the film was amorphous. It was a feeling of anger that we were all being lied to, it was a set of encounters with victims of the system in the US educational system and the activists who wanted to help them but it wasn’t a film that was coherent – and it didn’t feel right yet, just reporting on something isn’t really my style. I felt restless, lost and anxious like I still hadn’t got to the heart of it all, and that the film I had shot so far was right out at the edges of the onion. I must stress that these things don’t necessarily just leap out fully formed and in this instance, the idea of setting up our own bank and currencies was something that took a lot longer, it really is a collaborative project. One of the major turning points in forming the structure and the identity of the film came when we uncovered the civil society group Positive Money and their critique of our financial system based on how money is created. It was quite mind-blowing – and we took that as the nucleus of the project – and could hang our critiques and our actions on that…

BPFC: Walthamstow is a diverse community, how receptive have the community been to your project? Has it been easier or harder than you imagined engaging with all groups within the local community?

D.E: The community aspect was tricky at first, I remember when I started going around Walthamstow asking the question as to whether it was a creditocracy, (using it as a microcosm of Britain) it was hard to gain access to talk to people. When we came up with the idea of bank notes we struggled to recruit people to go on them. It is a big thing, as it’s asking people to stand up to something a bit, to become a sort of figure of resistance. At the end of the day, this is Britain, and no matter how diverse the community may be, we’re all a little shy over here and we like to hide our lights under whatever bushels we can find etc. After a year or so, really going around meeting and talking to people we began to gain trust and then it became easier and easier – but really it is Hilary who is amazing at believing anything can be achieved and then organising things into reality.

BPFC: Waltham Forest Council has been supportive of your project. Do you believe the same political will exists in central government to address the concerns you’ve raised over our monetary system?

D.E: I think there is a great deal of concern across the political spectrum about the problem of debt after all the British have never been so personally indebted. I do believe that ministers probably are genuine in their belief that if they cut vital services they will save money that will ultimately help with reducing the national debt – post 2008 crisis. However, what has been shown by multiple Nobel winning economists is that when you cut public spending you add to personal indebtedness. So whereas the problem is something that politicians of every hue recognise, there’s no agreement on how to tackle it. Also, it’s our belief that without tackling the root cause of debt – in money creation – that things will not improve. Banks need tougher regulation but it’s not something that the public is really thinking about at the moment, in fact right now, there are so many urgent problems with Brexit and an ongoing plunging pound, faltering housing market that people don’t really seem to know where to start.

BPFC: How has the experience been like filming “Bank Job”? What do you hope the public takes away from watching this?

D.E: It’s very tough making indie documentaries, we made one before which was well received but it was a real struggle though we had money from Channel 4, an investor, and some foundations. This one has been even harder and it’s been very tough, to make these things take massive commitment and belief and it’s incredibly precarious. We hope that the public learns about money and debt, the deep structural problems within our economy and that with this education political will to make meaningful change happens. Right now we are working on a plan for impact distribution to maximise the chances for meaningful change to come about. If we can have a genuine impact and a mass distribution this will make all the risk and the hardship worthwhile and we will be able to go on and make more projects.

BPFC: What have been the biggest insights you’ve gained while going through this journey?

D.E: Some of the biggest changes we need to make are not even being discussed or understood.

We have learned about the distortion of narratives in mainstream media. Before we really looked into economics we didn’t really understand how badly the subject was being dealt with on BBC for instance, and even across other outlets that one would think were ok. The truth is highly political and it’s under strict control.

D.E: Given the severity of the crisis, we believe that banks need to be regulated as per the Glass Steagall Act (repealed by Clinton in 1999) which was brought in after the Wall Street Crash – to basically stop banks from taking people’s savings and putting them on the stock markets.

We also really like Positive Money’s ideas around Sovereign Money Creation – so governments are no longer forced to borrow from private banks – they can create their own money backed by tax-payers. Right now in the UK, the government has to find £42billion in interest every year just to pay back to the banks before they can start funding our healthcare, education system and sort out housing, roads etc. Why not at least create some public projects with their own money – such as Abraham Lincoln did during the American Civil War with the ‘greenback’ dollar. We did have a government currency in the UK once before with the Bradbury Pound on the eve of WW1.

We also believe that austerity must end immediately. The cuts to the public spending are making the personal debt problems worse – and mean that as people are made unemployed etc. There’s less money in circulation in the real economy, meaning that the economy is being reverse stimulated.

We would like to see an end to the PFI debts of hospital trusts, schools and other public projects. The PFI companies have already been repaid many times over. Most are based offshore and pay no UK tax – yet they suck taxpayer’s money out of the economy – these debts should be subject to audits to ascertain the public benefit, how much has been repaid – and they should be closed. Debt Resistance UK is doing great work on this with local councils.

Finally, we believe in the right to debt-free higher education. It’s horrible to choose between debt and education and creates a terrible psychological burden to students starting out in life. Our brightest minds need to be able to contribute to our society moving forward, we have huge issues to solve together – and creating free higher education is a drop in the water.

We will have more updates on the release of Bankjob.