Since the Human Centipede series debuted in 2010 with The Human Centipede (First Sequence) it has provoked outrage and disgust across the world. All the films in the series were savaged by the media and the public.

However, despite its venomous reception, the films have gained longevity over the years. With their shocking nature managing to accumulate quite a large cult following of loyal fans. But what is it about this series that has managed to inspire such loyalty?

Today we will look back over the series. Reviewing the positive and negative reactions that it received. And asking how the series accumulated the fanbase it has.

The Creator and Premise

The series focuses on various insane individuals who disable people and then stitch them together from rectum to mouth to form the titular human centipede. With each film offering up slight variations on the premise.

The first film is about two tourists who get lost and subsequently kidnapped by a mad surgeon. This film focused more on traditional horror conventions than the viscera of the premise. The second movie then sought to address complaints of the first films tameness. The film is about a loner who obsesses over the first human centipede movie and decides to make his own human centipede – with messier and more disturbing results. Finally, the third movie sees a prison warden who watches the first two films and makes the prisoners into a human centipede as punishment. With it eventually being accepted as what America needs. But who birthed this idea?

The series was created by Dutch director, Tom Six. Six began his career working on the Dutch version of Big Brother. He eventually created his own production company which produced the controversial Gay in Amsterdam and the black comedy I love Dries. It was only logical that Six would combine the controversial and blackly comedic for the Human Centipede films.

Six said the idea for the series came from a joke he used to make about how to deal with criminals (which subsequently became the premise for Human Centipede 3 (Final sequence)). Six also stated he was influenced by the shock films of his youth, like Salo. And that he wanted his films to provoke a reaction from audiences. Six regularly encourages this on Twitter, where he retweets positive and negative feedback on his films; provokes discussion through personal tweets. Giving him a reputation as a provocateur. And he is good at it.

All three films were generally negatively received by critics upon release. With critics like Roger Ebert (and later Simon Abrams) either refusing to give the films ratings or giving them a thumbs down. Ebert said of the first Human Centipede:

I am required to award stars to movies I review. This time, I refuse to do it… Is the movie good? Is it bad? Does it matter? It is what it is and occupies a world where the stars don’t shine.

These negative sentiments were echoed in various reviews of the series, such as those of Mark Kermode.

Regarding the general audience, none of the films have a rating above 4.4 on IMDb, at the time of writing and the films suffered increasing diminishment in ticket sales. Showing that the films never received much love from the mainstream.

And the series courted its share of controversy. The second film was rejected by the BBFC (British Board of Film Classification) and was only released after over 2 minutes of footage was cut. Thus, causing many news outlets to take up the charge against the film as morally reprehensible.

But while many derided the series, it does have its defenders and fans. Critics such as Kim Newman have spoken in defence of the series. In a review of the final film Newman said it “fuses the shock tactics of avant-garde drama with ’70s exploitation. Like it or not, Six has contributed something fresh and demented to pop culture”. And Rebecca Hawkes praised the films as what cinema really needs. Because they are viscerally shocking in a way that no glossy Hollywood film can be, which helps shake cinema up creatively and deal with modern concerns. Including crime and punishment and the effects of media.

There are also many horror fans who enjoy the series for its disturbing/disgusting content which challenges societal taboos. Fans regularly post messages praising the challenging subject matter of the film and admiration of Six and his films on Twitter. And there are plenty of forums dedicated to fan art, merchandise and making memes from the series. This shows that the fans can find humour and artistic meaning in both the series and people’s perceptions of it.

This puts the series in a similar vein as classic midnight movies, like Pink Flamingos and the Rocky Horror Picture Show. Movies that were either bad or too weird to achieve success but struck a chord with a smaller niche audience. And shows that meaning can be found in these films if you look for it.

What does it all mean?

To summarise, there are many arguments to be had on the merits of Tom Six’s provocative trilogy. With its disgusting central premise, it’s easy to see why most critics and the general public view the films as solely degrading shock horror. But the series fanbase view the films differently. They are movies that challenge audiences in ways no other movies do and offer cynically satirical looks at the society surrounding them. Or are sources of ironic humour that offer safe respite from real-world horrors.

Perhaps this story is ultimately about irony? Tom Six created this series from a joke and managed to make a trilogy despite box office telling him “no”. The series is juvenile in its obsession to offend but deals with real-world issues. And people are able to take it so seriously as to be offended or inspired to find artistic meaning in movies based around the consumption of excrement. Maybe The Human Centipede trilogy is the greatest prank ever pulled on film watchers, with Six and ironic internet users just having a great laugh at our expense.

But regardless of your stance, The Human Centipede series has become a benchmark for modern shock cinema. They are something that school children speak about in hushed whispers and dare friends to watch. And inspires passionate hatred and love at the same time. But wherever you fall you will not be apathetic about the series and in the days of media oversaturation, Six deserves praise for that. If nothing else. 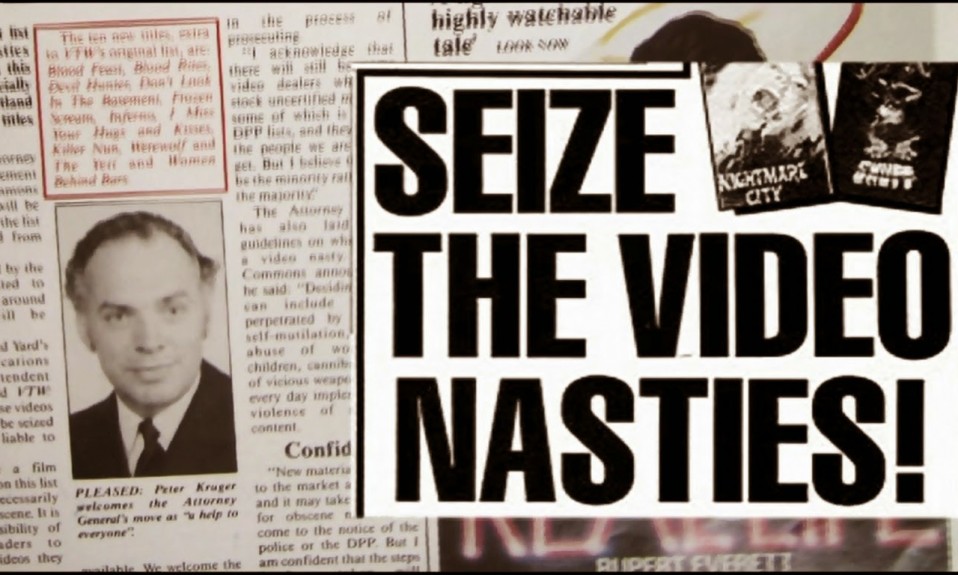 Video Nasties: The History of Censored Films In The UK