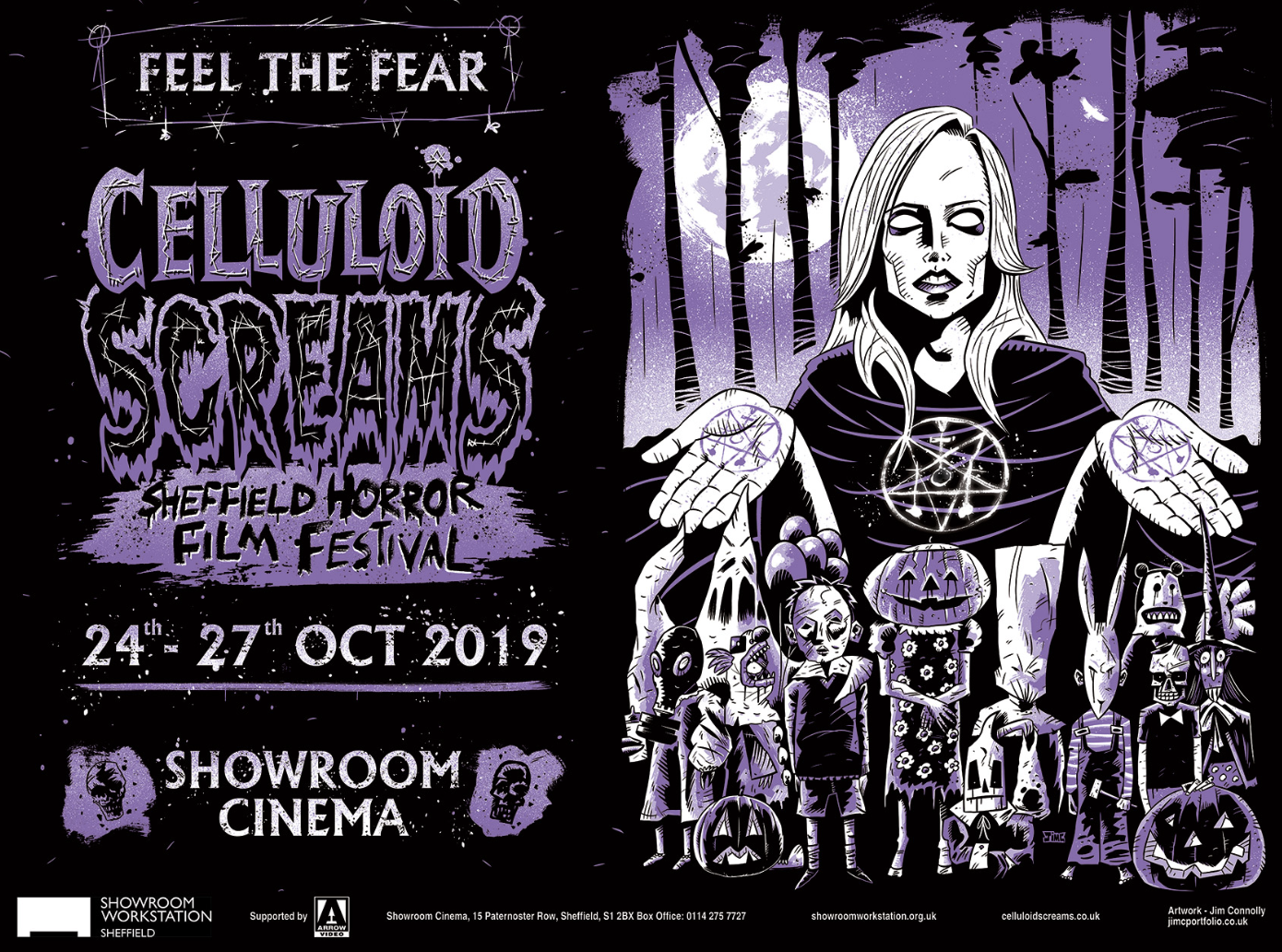 This past weekend to celebrate Halloween I decided to return to the Celluloid Screams horror festival for the second time. And, I wanted to take the opportunity to let you guys know what I thought of the festival this year.

As ever Celluloid Screams was a fantastic experience for genre fans. The staff, organizers and fellow festival-goers were all incredibly friendly and helped contribute to the best festival atmosphere I have been to yet. Everyone was willing to engage in conversation about films, help out with any problems and were incredibly well behaved when it came to watching the films, as well as enforcing good cinema-going etiquette. Something that is always appreciated by me.

Though we didn’t have any director Q&A’s like last year it was more than made up for by the extras we got. Firstly, we had stalls from the likes of Fab Press and Arrow Video. As well as exclusive previews for the second season of Wellington Paranormal and a local production called Seepers: A Love Story coming next year from Gory Hole Films. Both bode well for the upcoming projects. And the festival also did their bit to contribute to a good cause by encouraging people to sign up and give blood with the NHS.

Lastly, of course, I got to see loads of films. Unlike last year, I saw all 17 feature films shown at this years festival. But like last year I thought I would give you guys my short takes on the movies I saw. All kept under 50 words, ranked from worst to best:

Corporate Animals: A movie that thinks merely referencing popular culture in a snippy, self-aware fashion (including the Weinstein case) is the same thing as humor. None of the jokes have any sense of timing or build-up. They’re just thrown out by a cast clearly killing time until their paycheques clear.

Outback: Some beautiful cinematography and decently tense moments in the third act don’t make up for the unbearably whiny characters, cringy dialogue and one of the most obnoxious soundtracks I’ve heard all year.

Tone-deaf: Despite a standout performance from the ever-great Robert Patrick and a good round of ironic laughs to be had, the films unsubtle nature in regards to delivering jokes, postmodern sub-Scream dialogue and thin characterization make the movie hard to really engage with as anything aside from a funny diversion.

Making Monsters: Using a YouTube prank show as the story basis is quite cringe-inducing. And for the first half only serves as an elaborate crutch to hold up the story. However, once the reasoning behind its use is revealed Making Monsters becomes very entertaining. Even if certain things still don’t make sense.

After Midnight: A movie that suffers from an identity issue. Part formulaic romance part unengaging monster movie, After Midnight’s first 2 thirds will leave many viewers cold. The finale however, while not entirely justifying the first portion, will leave viewers satisfied. In addition, it features the best jump scare of the festival.

Colour Out Of Space: Nic Cage does cosmic horror. The second Nicolas Cage neon-soaked horror film in as many years (the first being Mandy), does have a lot of dodgy CGI, very wonky performances and an uneven tone. But it more than makes up for it with its sheer entertainment value.

Girl On The Third Floor: While the film would’ve benefited from a different lead actor than CM Punk and it does feel like a first feature, if you want an enjoyable horror movie that focuses on tension over jump scares and thoughtfully addresses issues of sexism present throughout many genre movies then check this out.

Bliss: A mixture of Climax and The Addiction, Bliss is a visually stunning foray into psychedelic horror with a glorious 70s grindhouse aesthetic, some great performances and an infectious soundtrack. Hampered by a severely unlikeable main character, obnoxious dialogue and a very repetitive structure.

Daniel Isn’t Real: Adam Egypt Mortimer’s second feature is a powerful watch. With a strong dower tone, visuals and mostly great performances from its cast. However, it crumbles under its own weight in the third act. Trading in subtlety in favour of overexaggerating everything to the point of unintentional parody.

The Golden Glove: Chillingly straightforward in its execution of an incredibly bleak story. Featuring an incredibly slimy turn from Jonas Dassler and haunting use of licensed music. The Golden Glove is not a movie you watch to enjoy. But as a well-made true-crime horror movie, you definitely won’t forget it.

Little Monsters: A charming cute zombie romp, that is formulaic, often cheesy and relies a little too much on man-child angst in the beginning. But through Lupita Nyong’o’s heartfelt central performance the film soon finds its footing as a funny love letter to teachers and childhood optimism.

Come to daddy: This black horror-comedy starring Elijah Wood about family reconnection isn’t for everyone. It’s slow, deliberately uncomfortable pace means you never know whether you’re supposed to be laughing or not. Though not all the jokes land and some threads feel like padding, it’s worth seeing purely for its odd presentation.

Why Don’t You Just Die!: No country does social metaphor pictures like Russia. Set mostly in an apartment and taking aim at many aspects of Russian society the film goes in so many different directions and juggles so many different tones so well that you won’t want it to end.

Synchronic: My introduction to Benson and Moorhead (The Endless) couldn’t have made a better first impression. With an incredible premise, fantastic acting (I’d love to see Anthony Mackie and Jamie Dornan together in another movie), beautiful visuals and a lean pace, this is something any cosmic horror fan needs to see.

Antrum: If you get the chance to see this movie in the cinema, do it. Because so much of this movie’s effectiveness comes from seeing it with a crowd. A brilliant example of transmedia storytelling, thick with atmosphere and imagination. A must watch for fans of 70’s euro cult horror.

Extra Ordinary: The film that won the hearts of everyone at the festival, winning first place in the audience vote. A charming homegrown comedy filled with personality, pitch-perfect timing, quirky and engaging characters and the best editing gag I’ve seen this year. All horror-comedy lovers need to see this.

The Nightingale: My favourite film of the festival. Jennifer Kent’s sophomore feature focuses on the horrors of colonialism and oppression with awe-inspiring results. The pacing is a little slow, but everything really comes together to create one of the most hauntingly beautiful, brutal and nuanced films to discuss oppression in years.

So ends my second experience at Celluloid Screams 2019. It was yet again a fantastic experience that makes me proud to be a horror fan. I hope you all found this little retrospective informative and that I’ve encouraged you to check out some of these movies or perhaps even attend the festival in the future. I know I will definitely be trying to return next year. Either way, happy viewing and Happy Halloween.