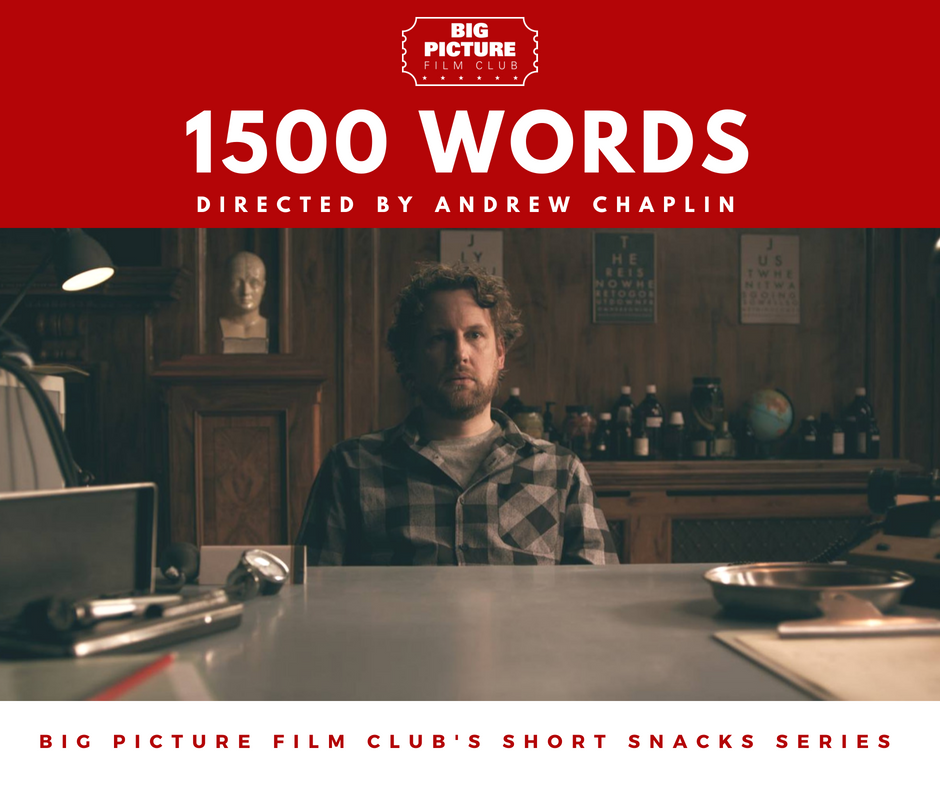 Synopsis: Sadly, a lively and happily-married young man is about to die. Not in a year, neither in a month or even a week, but precisely 1500 words from now. Not hours but words.

Film: 1500 WordsSynopsis: Sadly, a lively and happily-married young man is about to die. Not in a year, neither in a month or even a week, but precisely 1500 words from now. Not hours but words.Director: Andrew ChaplinWriter: James MenziesStarring: Marcus Garvey, Eri Jackson, Rachael NaylorBig Picture Film Club's Short Snacks series is a collection of interesting, thought-provoking and creative short films from emerging UK-based filmmakers. 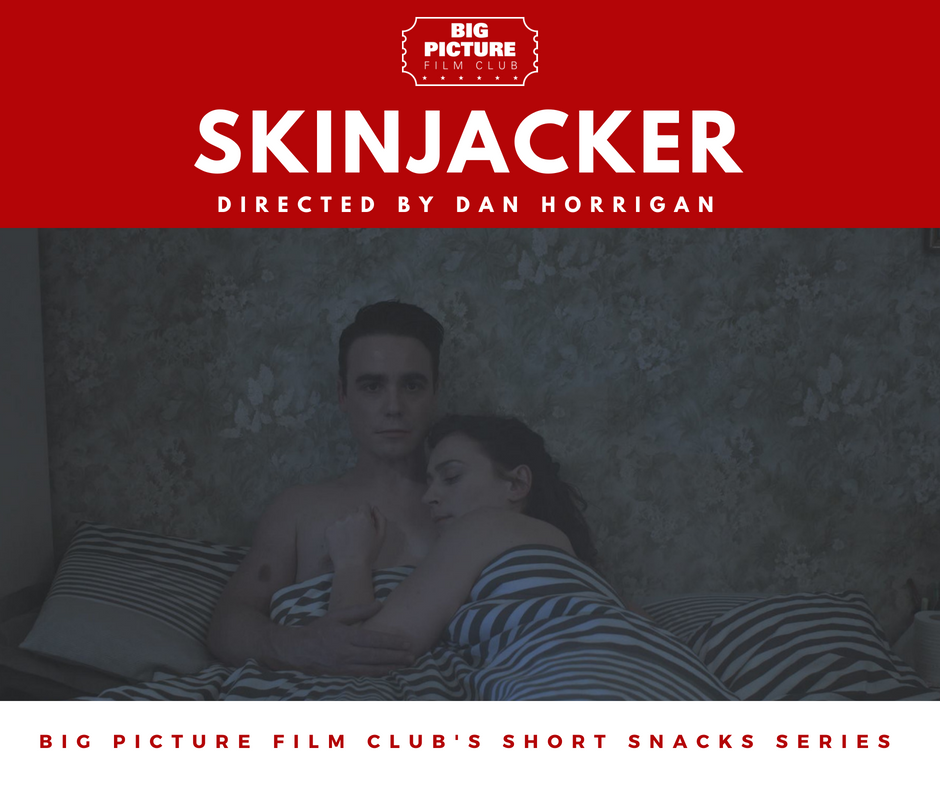 Big Picture Film Club presents it’s latest film collection: Discovery. Be it love, family secrets or embarking on a journey of self-discovery, this collection of films tells the stories of individuals and their quest to unlock a part of their life that’s been missing for far too long. 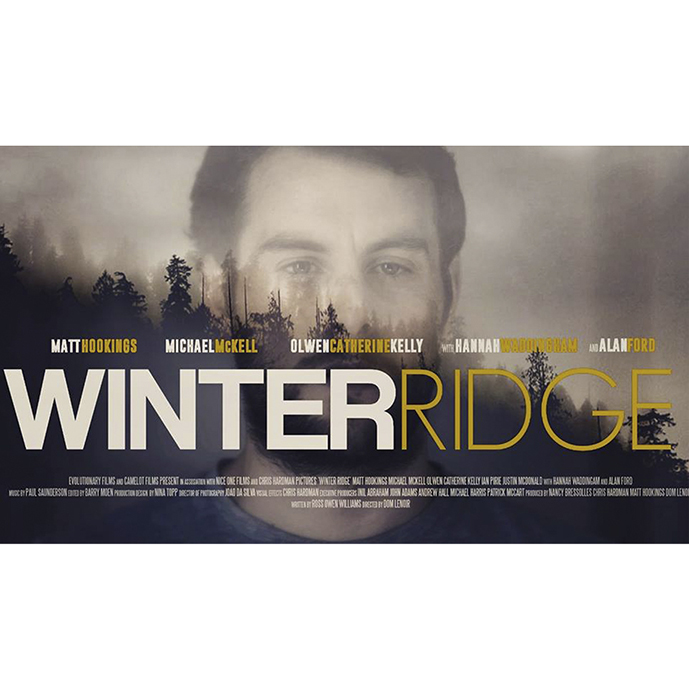 Big Picture Film Club’s First Look series takes a look at upcoming films that have grabbed our attention, with the aim of finding out more about the release and the creative minds behind the projects.

Winter Ridge is a crime-thriller set in the fictitious English town of Blackrock (filming took place in North Devon). The central plot of the film revolves around a team of detectives tracking down a serial killer targetting the elderly.  Winter Ridge even made it’s way to the 2017 Cannes Film Festival picking up distribution later in the year. The independent film has managed to bring together a remarkable cast: Hannah Waddingham (Game of Thrones, Les Misérables), Alan Ford (Snatch, Lock Stock and Two Smoking Barrels) and Olwen Catherine Kelly (The Autopsy of Jane Doe). The crew behind the camera are as equally with the film overseen by award-winning director Dom Lenoir and producers Nancy Bressolles (Rise of the Krays) and Chris Hardman who has worked on films such as Avatar, Star Wars and Kingsman.

We were able to have a Q & A with Director & Producer Dom Lenior to find out more about Winter Ridge, what to expect and when the planned release is for…

Finance is always a big issue when producing an independent feature film, how did you go about funding this film? What challenges did you face in doing this?

Dom: It has been a case of building up a track record and work ethic over quite a few years as individuals and through Camelot. We funded the film largely through the British SEIS (Seed Enterprise Investment Scheme) tax incentives and with private investors. We came to them having formed a relationship on previous projects and due to the quality of work or various shorts we had made prior, as well as a slate of films for the future, we put forward a visible track record in quality and a ready to go film. Having attached cast, high-level crew, and sales estimates definitely smoothed this process over as well and for a cinematic independent film felt like a better route than funding bodies.

How have you been able to put your own spin on the crime thriller genre and what were your sources of inspiration for the film?

Prisoners and Insomnia were big influences and inspiration in terms of the mood and feel of the movie. The initial inspiration came from the writer Ross Williams whose family had suffered from degenerative diseases including Alzheimer’s. The idea was to create a film that was an exciting psychological thriller format but touched upon some of the difficulties families face with someone suffering from an illness. My main goal creatively was to create a film that didn’t feel overly British cop and small close-knit town but something more ominous and isolated. This involved taking a lot of mood influences from Scandinavian and American Detective shows and bringing a really cinematic and atmospheric approach to the visuals, music, characters and setting.

Winter Ridge touches upon how do you go about tackling the subject of Alzheimer’s in a way that is authentic and does not trivialise it?

Mostly the aim was to look at Alzheimer’s in a sense of showing some of the situations and problems sufferers have gone through. We tried to not place too much judgement on any course of action and if anything I think the film hints that there are no easy answers and it is more about shining a light on some of the problems people and their families face.

The film has a crew (both behind and in front of the camera) that have worked on numerous big budget films – how did the film crew and cast come together?

A lot of the connections have come through Camelot; Matt and I have worked with a number of the cast and crew also. This has been something that has naturally developed through years of collaboration on ambitious shorts, meeting them on high budget films and we are lucky enough to have people at that level who believe in both our work and our approach to films enough to have continued collaborating.

How was the experience of screening at Cannes?

We released our teaser trailer at Cannes which received a really good response from the market, within a day we had already sold a major market and interest was high to see the film.

What do you hope people take away from this film?

Reconsidering their views on life and death, how we relate to our families, and how far we will go for the people who are in danger or we love.

Winter Ridge is slated to be released in late spring both in the U.K and internationally. We will continue to keep you updated on the release of the film. Watch the behind the scenes trailer below.

Winter Ridge – Behind the scenes Trailer 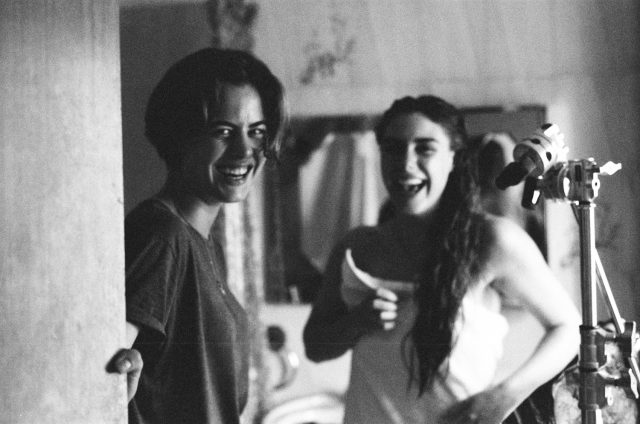 We all like surprises – who doesn’t? At Big Picture Film Club, part of what makes our job so cool is that we are able to find hidden gems in the expansive film world and do our part in bringing them to the forefront. One such example is the short film, Anchor, by photographer and director, Madeleine Morlet. Although only 9 minutes long, there is not a second wasted in this gripping power play between two lovers, exploring sexual dependency and complex emotions in an increasingly strained relationship.

In Madeleine’s own words, “Anchor is exploring feelings, by coming at it from a place of rigid constraints it was also possible to explore the dullness of extreme feeling. The piece captures a woman as she reaches the full saturation of what she is able to feel, to the point where everything flatlines and nothing but a dull ache remains”. We took the opportunity to have a few words with Madeleine to find out more about what she is up to and to discover more about Anchor…

Big Picture Film Club: What was your motivation in creating “Anchor”?

Madeleine Morlet: The easiest way to answer this question would be to say that Anchor wasn’t motivated by any specific cause, it was motivated by what was then, and continues to be now, a personal objective to make work.

BPFC: The overarching theme of “Anchor” appears to be Power, more specifically the use of sexual power in relationships – would we be correct in thinking this?

MM: I would say that is accurate. Reflecting on my own experience I find that often it is through another person’s eyes that you can really see yourself honestly. I like to think about power and control in relationships. In making Anchor I felt that I could walk in either characters shoes. The dynamic between two people in terms of attraction, desire and sexuality affect this power balance and the needs that drive individuals in relationships can vary greatly.

BPFC: What are you hoping people take from watching this film?

MM: It’s difficult for me to imagine this film having a wide audience, so for those who do see it my greatest hope would be that it produces an emotional response.

MM: My intention was to make films but a lot of time and resources go into making even a short piece. With this in mind, I found that photography was a way I could actively engage these skills on a regular basis. Anchor was born from my first photography series and each frame was built from one of these original photographs, the images were then used again as a reference for the grade. So yes, it was intentional that the film has a similar feel to my photography work.

BPFC: Is this your first short film? What creative and technical challenges did you face making Anchor?

MM: I consider this to be my first short film. It eventually took 18 months from conception to completion to make Anchor. There were a lot of challenges and setbacks in making the piece, as there often are with zero-budget short films. The script, which was based on real experiences, was too unrealistic, it took six months to cast Delphine in the role of Olivia and with so much emphasis on the sound it was more than half a year to complete the score. Ultimately I approached the entire process with patience and acceptance, this film was made only on my schedule so we didn’t have to hit any deadlines – which meant it had plenty of space to overcome these creative and technical challenges.

BPFC: What is next for you and “Anchor”?

MM: Anchor is being submitted to festivals, which is a learning curve in itself, and my plan is to continue working as I am.