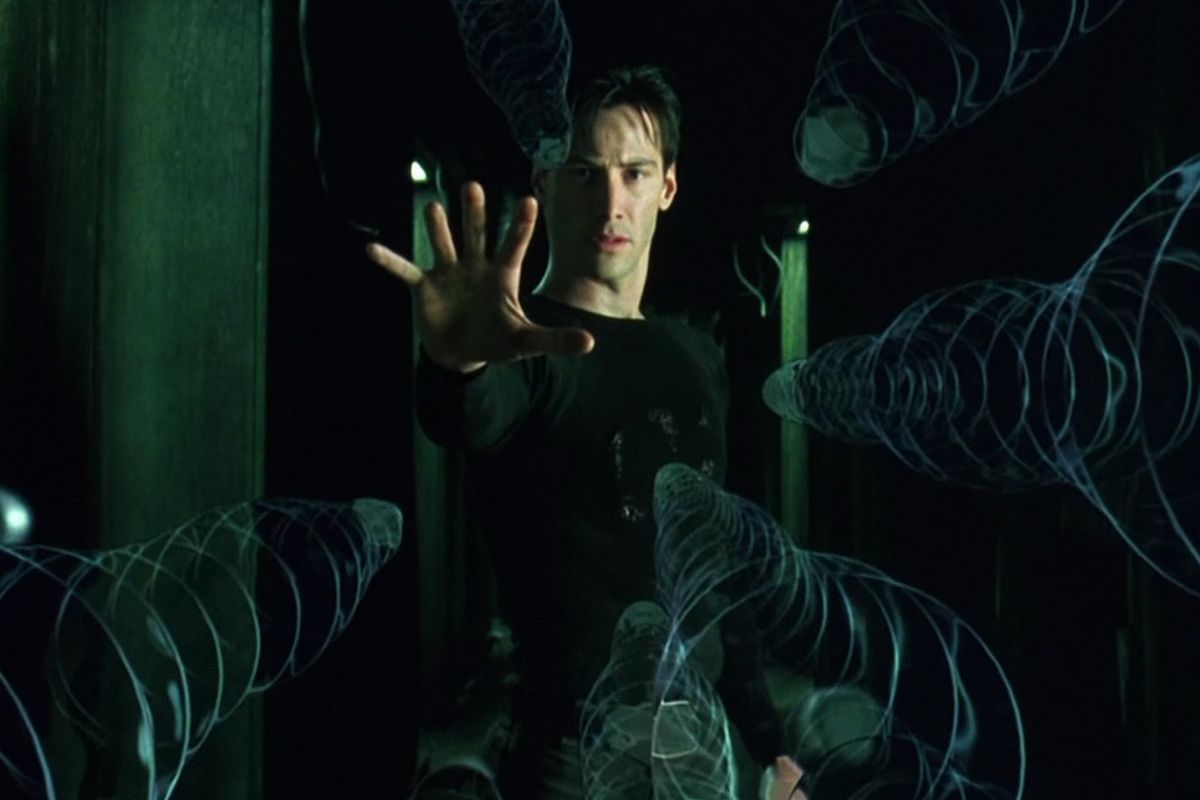 It has been twenty years since the release of the hugely influentially film The Matrix. It’s hard to overstate the impact it had on its release, it was the fourth highest-grossing film of the year and its effect was felt not just in films but fashion, speech and even mobile phones. But what was once the height of cool over time can appear dated and lacklustre, how does this film hold up?

For those who don’t know I shall briefly explain the plot – Thomas Anderson lived in late 90s America, working as a computer programmer but is secretly the hacker “Neo”. He was approached by sinister government agents asked him to work as a spy. Neo refused and is quickly picked up by the people he was asked to spy against. Their leader Morpheus explained to Neo that what he thought was reality was actually only a computer programme, in reality AI robots were draining his energy to survive. What follows is a spectacular two hours of gunfights, fistfights and metaphysical pondering on the nature of reality and destiny.

There was a huge amount of hype surrounding the film especially with the talk of unprecedented special effects – what became known as “bullet time”. The famous “bullet time”. The Matrix was not the first film to use this technique but undoubtedly popularised it. Bullet time is a form of slow-motion photography that will often have the camera moving around the target. In The Matrix, this was used as characters dodged bullets using what would be super-human reflexes. While the technology has moved on a lot since the effects still look great to this day.

The film wasn’t stunning just because of bullet time. The hand to hand fight scenes, such as Neo and Morpheus fighting or the climactic fight between Agent Smith and Neo were amongst the first of the extremely choreographed fights that are the mainstay amongst recent action-films (with perhaps the most relevant example of this being in the John Wick films – starring Keanu Reeves).

The Matrix capitalised on computers and the Internet in a way few films had before. Neo was a computer programmer by day and hacker by night and you got the feeling that not only Neo understood computers but so did the Wachowskis. The fact that Neo goes by that name, his hacker alias, seemed to reflect an understanding of the Internet, a place where you could be whatever you wanted to be.

In many ways, the storytelling aspects of The Matrix were rooted in old ideas. Robot tyranny, virtual reality, sinister but vague government agencies had all been done before. The idea of Neo being The Chosen One again is nothing new but perhaps they made it their own, in an episode of South Park there is a search for a chosen one they refer to as “The Keanu Reeves child”. By the Wachowskis’ own admission the film is heavily indebted to Japanese anime and Hong Kong action films. But I think the Wachowskis deserve huge plaudits for pulling all of these aspects into one film whilst at the same time combining an over-the-top action-sci-fi blockbuster with an intelligent hard sci-fi drama. Apparently the Wachowskis had the main actors read relevant books on philosophy and science so they could comfortably explain the ideas thrown around in the film.

The cultural impact was huge. Like A New Hope or The Dark Knight The Matrix launched a thousand copycats and its influence can be felt in many more. The Simpsons and Spaced both parodied it while The Onion could write about something being “Matrix-y” and people knew what you meant. Anyone who wore a long black leather coat was imitating Neo. The term “matrix” has been used a lot in sci-fi (in Doctor Who it’s the repository of Time Lord knowledge, it’s the name of a DC superhero and is the name of a 90s fantasy tv show) but if used today would only refer to the film. The choice of red pill or blue pill has become synonymous with choosing fantasy over – an often painful – reality and people can talk about odd events and coincidences as “glitches” in the Matrix, a moment where a person can see something is not right in reality. One such glitch is that the aforementioned Matrix tv show starred Carrie-Ann Moss, one of the stars of the film The Matrix. Weird.

The world recently learned that there will be a fourth film in The Matrix franchise. After the huge success of the first film, the two sequels were not well-received but there is already a lot of interest in this new film. Crucially Keanu Reeves, Carrie-Ann Moss and Lana Wachowski are all part of the film. I think the years have been kind to The Matrix, with the sequels being forgotten about and the delight of the original still has a hold over people. I recently rewatched the film and despite knowing every twist, betrayal and cliffhanger still thoroughly enjoyed it, immersed in an interesting world that was glorious to watch. 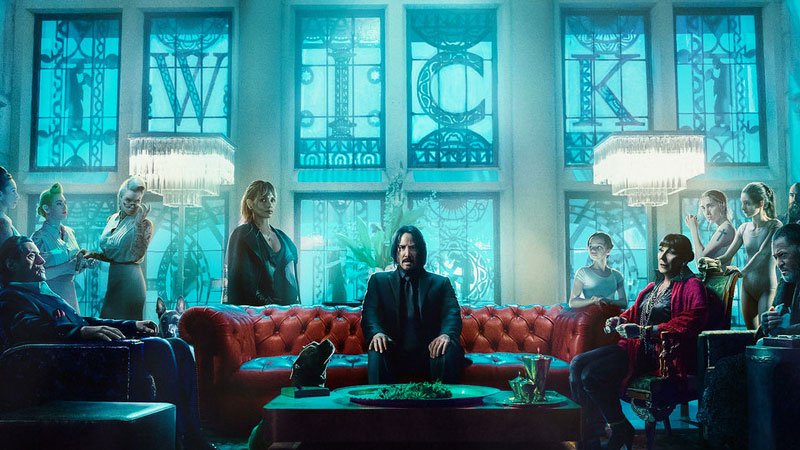 Keanu Reeves’ action franchise returns for its third instalment and this time it has Latin in the title.

Super-assassin John Wick has a $14,000,000 bounty placed on his head after breaking one of the cardinal rules of the Continental Hotel – no business is conducted on hotel grounds. As this is a hotel for assassins, “business” means killing people. In the world of this film, assassins lurk around every corner and John is set upon by an endless array of killers. Eager to get out from under this death sentence, John delves deeper into the mysterious world of assassins to find a solution to his problem.

John Wick was directed by Chad Stahelski who, famously, before that film had been a stunt co-ordinator and as such was incredibly focused on the fight scenes. Stahelski stayed on to direct Chapter 2 and Chapter 3 and the fight scenes are still amazing, at times truly dazzling and clearly directed by a world-class expert. I am something of a connoisseur of good fight scenes and I still winced at how real some of the blows felt while marvelling at the technical capabilities of all involved.

Keanu Reeves obviously dominates the film as he plays John Wick and continues to bring an almost stoic sensibility to non-stop life and death fights. Alongside Reeves’ acting talent is sheer ability to be in this film, I am unaware exactly how much of Reeves’ fighting is done by a double but he certainly seems to be taking on a lot. Ian McShane reprises his role as Winston, manager of the Continental Hotel (the assassin hotel that has placed the bounty on Wick for breaking their rules) and with him also returns Lance Riddick as the ever helpful concierge, Charon. Lawrence Fishburne is also back as the unnamed Bowery King – the ruler of another mysterious group of criminals who pose as homeless New Yorkers. There are newcomers – the primary antagonist is the Adjuciator, a representative of the High Table, the rulers of this world of assassins played by Asia Kate Dillon, who not only wants Wick dead also wants New York shaken up a bit. Perhaps more important is the addition of Mark Dacascos, an assassin and sushi chef billed as someone actually capable of taking on John Wick. Real star power is brought by Oscar winner Halle Berry, who operates a similar hotel as that managed by Winston but in Casablanca. Angelica Houston pops up playing The Director, who doubles as ballet director and crimelord whose help John Wick seeks and provides a little more backstory to the character of John Wick.

I consider John Wick a great action film, a twist on a simple revenge story, driven by Keanu Reeves’ performance and some of the best fight choreography ever. John Wick 2 was entertaining, and again, had amazing fight scenes, but it wasn’t quite the same and I feel much the same with John Wick 3. It’s certainly an enjoyable film and I was never bored but the more it’s delved into this world the less I get out of it. It somehow lacked the magic of the original and this might be as simple as I knew what to expect, whereas Chapter 1 was a surprise. I do think that there is a problem with John Wick’s motivation, in the first film it was revenge but in the other two there is something more complicated going on – debts owed, rules broken and the schemes of powerful people.

The more that is revealed about the Continental, the High Table, the Bowery and so on the more convoluted and less satisfying it becomes. The sheer number of assassins that exists not just in New York but seemingly any spot on the globe is astounding and stretches credulity. The thing that seems most unbelievable is that surely there aren’t this many assassinations to support such a huge number of assassins.

Whereas the first chapter was based entirely in New York, Chapter 2 took us to Rome and Chapter 3 continues with this international perspective. John Wick [Chapter 1] felt very contained, everything happened in a couple of days in a couple of locations but increasingly the franchise is eager to spread its wings. Doing this does allow for a bit of variety but personally, I would have preferred a more claustrophobic setting.

There was a cool touch in John Wick where after one fight scene early in the movie the police turn up. They know John who is, simply ask if he’s working again and then stay out of his way but you can’t help but think the level of carnage caused in this film would warrant some kind of police response. There are even suggestions of supernatural powers or mystical techniques possessed by some of the assassins, that to me, make John Wick’s phenomenal killing abilities less impressive.

Of course, John Wick was never supposed to be set in the real world, this hyper-violent world of secret assassins and globe-spanning criminal syndicates was supposed to be escapist fun but I think after the first film the balance between reality and fantasy has moved too far to the latter.

But really most of these complaints and minor gripes and is just what separates a good film from being a great film. If you enjoyed the previous John Wick films you will almost certainly love this. The fight scenes continue to offer something new, whether it’s drafting in Boban Marjanovic, a seven foot three inches tall basketball star, to serve as an early opponent or adding horses and dogs to the weapons John Wick utilises. While I feel the story has become a little bogged down with secret organisations the core of the film remains the same- John Wick having to fight a seemingly impossible number of people.

The biggest plus in the film is certainly Mark Dacascos. In the two previous chapters, there was no one who, individually, was thought to be John Wick’s equal when it came to killing people. There wasn’t one bad guy for him to fight there would be a couple of dozen. Of course, John Wick still has to fight through dozens of opponents but it all leads to a showdown with Dacascos.

Overall this is a very enjoyable action film that doesn’t quite capture the magic of the first instalment but compared to other franchises on their second sequel this is amazing stuff.