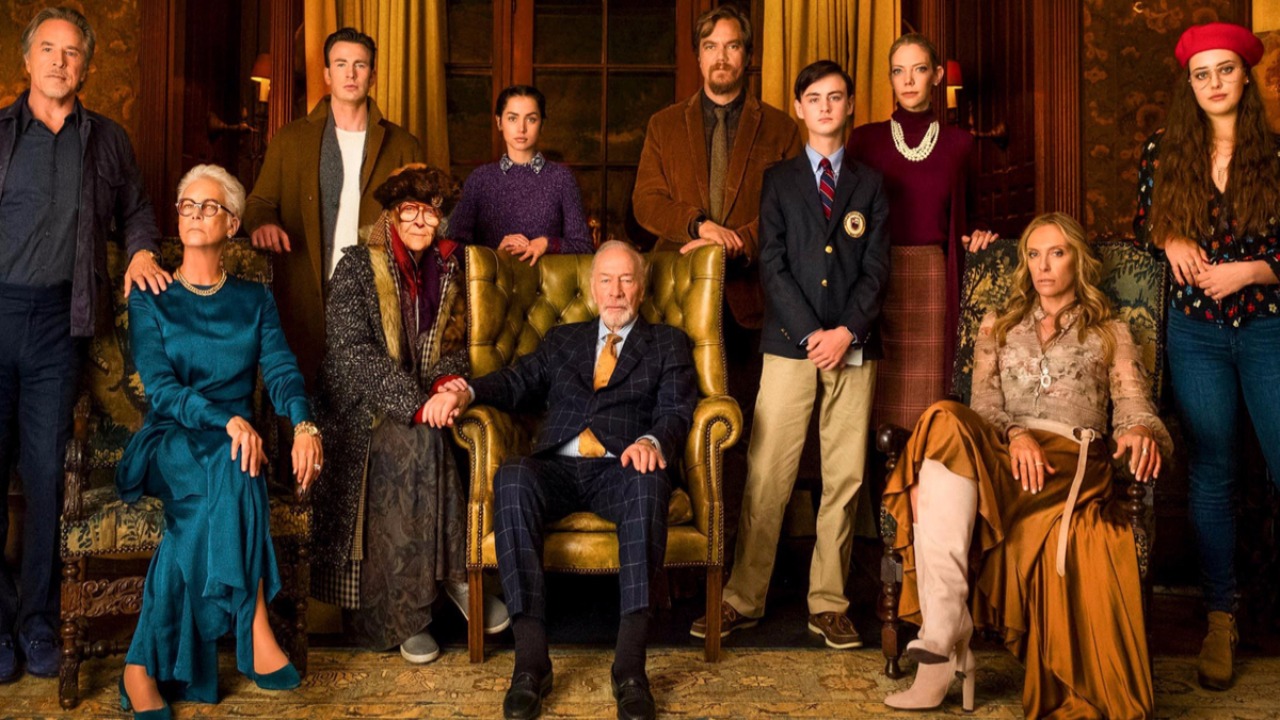 2019 is certainly the year of playing games. We already participate in a round of hide and seek in the Ready or Not from directors Matt Bettinelli-Olpin and Tyler Gillett. Now writer/director Rian Johnson (Star Wars: Episode VIII – The Last Jedi, Looper) brings a twisted game of Cluedo to the big screen in Knives Out. A game that’s played by a superb cast, brought to life by sublime cinematography and packed with humour. Are you ready to solve the puzzle? Let’s do this!

That game is afoot

That death can take over life in a heartbeat is being cruelly proven to the Thrombey family. The day after celebrating the 85th birthday of Harlan Thrombey (Christopher Plummer), he’s found dead. As a father and grandfather, he will be missed by everyone of his family. Although, not by everyone it seems, as his death might not be suicide as initially thought. It could be a grim murder instead and because of that, detective Benoit Blanc (Daniel Craig) starts to look into this case. He’s not only investigating that tragic night but also the entire family. What a family it is!

It doesn’t take long before we find out that every family member has some dark secrets behind the innocent and grieving façade. The main suspect is Marta Cabrera (Ana de Armas), the help who was the last person who saw Harlan alive. Was it maybe one of the family members such as his daughter Linda (Jamie Lee Curtis), his son Walt (Michael Shannon) or one of the inlaws such as Harlan’s third child’s widow Joni (Toni Collette) or son-in-law Richard (Don Johnson)? Probably not because the dogs barked and so it certainly must be a stranger? Maybe it’s the long lost Ransom (Chris Evans), who has a nasty relationship with the rest of his family? The further his investigation takes him, the bigger the mystery becomes. Who will be the evilest family member and will be able to solve the murder?

So many questions and so little answers. Throughout the film, more clues about the dead come to the surface. By the end of Knives Out, you will not only have become the next Sherlock Holmes but you’ve also seen a thrilling, electrifying, humourist and stunningly performed film.

There’s absolutely no shortage of incredible talent in Knives Out. He already did spy work in multiple James Bond films and solving mysterious is what Graig (The Girl with the Dragon Tattoo, Spectre) is superior in. In Knives Out, he steps up his game even more as the clever, witty and humouristic private detective. Even his Southern accent is spot-on. The “I’m talking to myself” scenes are such a joy to watch and the big revelation scene is certainly the highlight of this movie. As the grieving daughter, Curtis (Halloween, An Acceptable Loss) never overplays or underplays the emotions and gives her character a lot of flair and confidence. She brings a lot of humour and memorable moments to Knives Out.

It was halfway through the movie that we got a glimpse of Evans (Avengers: Endgame, Gifted) for the first time but the wait was worth it. With his contagious laughter and fabulous performance, he brings out the arrogant, underhanded and secretive characteristics of Ransom. It’s not only the established actors giving it their best shot but also upcoming talent such as de Armas (Blade Runner 2049, War Dogs). She puts on a thrilling, emotional, funny and joyful performance which is both dark and lively at the same time.

Another element of why this movie feels like a big game of Cluedo is the colossal mansion with many different and spacious rooms. All the rooms are filled with possible murder/suicide weapons such as the many antiques, paintings or even that magnificent masterpiece full of knives. Is there one knife missing by any chance? Congratulations are definitely in order for the location management department and the set decorator.

A film like this, that’s full of suspense, betrayal and mystery elements, needs to have an on-point score and that’s exactly what Knives Out has. It doesn’t take long before the sharp violins, heavily beating drums and bombastic music take over this film. The score gives this movie such a powerful effect.

A devious whodunnit with a superb cast

After being screened at the BFI London Film Festival, Knives Out is now now coming back to UK cinemas. If you want to see a gorgeous, enigmatic, compelling and entertaining whodunnit that’s brought to life by stunning performances, grandiose score and bags of humour then Knives Out is the perfect film.

With the new film already hailing a triumphant return for the series at the box office, on this most spooky of weeks, it is time to look back at the original film that started it all. A film hailed by many to be the grandfather of the slasher genre and one of the scariest films of all time. But after all the sequels, reboots, rip-offs and increasingly violent films that came after it, how does the original Halloween hold up?

On Halloween night, 1963, in the small town of Haddonfield, a young boy named Michael Myers murders his sister, Judith Myers for seemingly no reason. Michael then spends the next fifteen years locked up in Smiths Grove Sanatorium under the eye of doctor Samuel Loomis (Donald Pleasence). But on one fateful night, Michael escapes and returns to his hometown. He then begins stalking teenage babysitter Laurie Strode (Jamie Lee Curtis) and her friends. With Dr. Loomis hot on his trail, will the girls be able to survive Michael’s onslaught? And more frighteningly, can Michael actually be stopped?

Halloween does not need gory kills to set its audience on edge. Because Halloween effectively generates a thick atmosphere of creeping, unknown dread. There are several factors for why it is able to build this so successfully. Chief amongst them being the films iconic killer.

Michael Myers is terrifying in Halloween because there is no rhyme or reason to his actions. The opening revelation that he was only a child when killed his older sister, is truly haunting. Especially since he shows no remorse or comprehension of what he did. He then stalks and murders the high school friends simply because he can. Tapping into our fear of the unknown. This is helped by other various touches. For example, Michael’s mask is a blank, expressionless parody of a human face (a white painted William Shatner mask) that is troubling because of its indifference to the slaughter Michael commits. And there are things about him that never sync with reality. His average build and almost superhuman strength, as well as his undying nature and his ability to disappear at will, transforms Michael into a nightmarishly surreal figure. And he has terrified generations of moviegoers ever since.

The performances are another way the movie evokes a feeling of dread. Donald Pleasence’s Doctor Loomis is one of cinemas greatest harbingers of doom. Despite hardly interacting with Myers during the movie, he instils a sense of fear in the audience for how calmly assured he is of Michaels evil nature. He knows what Michael is capable of and that he is the only one who can stop him. Jamie Lee Curtis also makes her film debut as one of the horror genres most fondly remembered final girls. Curtis plays Laurie with humility and innocence that makes her easy to root for. And all the other performers, despite some occasional cheesiness, come across as likeable, everyday people. Making it all the more tragic when the bogeyman rips through their lives.

Lastly, the films production elements help to elevate the unease. The film had a shoestring budget and could not afford lavish location work and set design. So, the film was forced to economize. Thus, the set design is minimal and the action confined to a handful of locations. Making the audience feel a sense of claustrophobia and helping the setting feel more intimate than the overblown nature of many of its higher budgeted counterparts. John Carpenters score and directing are also excellent at building tension. The simple but effective score gives Michael a great sense of presence and constantly sets the audience on edge. And the way Carpenter builds suspense through having Michael in the background of shots without lingering on him is masterful. It puts the audience one step ahead of the characters and makes the scenes where the shape slowly creeps towards his prey nail-bitingly taut.

While Halloween is a classic, there are aspects that will not satisfy everyone. The films loose connection with reality regarding Michael works. It makes him more unpredictable and the characters feel more vulnerable. But some of the characters actions also have a loose connection with reality and can remove the audience, momentarily from the experience. For example, during the finale when Laurie drops Michaels knife right next to him, it seems like a leap of logic. Especially, as she is still not sure if Michael is actually dead.

The plot can also feel a bit meandering at times. The teen’s story is necessary thematically and Loomis’ scenes are always effective. But at times the plot leans too hard on the teenager’s story to engage the audience. Which can be a problem if you don’t find the teenagers and their dated slang interesting. And as a result, Loomis does not directly affect the plot aside from at the beginning and end of the film. Making Loomis seem like an afterthought.

Finally, while the score is iconic, it does become a crutch after a while. Often during the films second act, the score will dramatically increase to ensure that the audience knows that Michael is still around. And to make sure they have not lost interest. Which feels very cheap. A little goes a long way after all.

Despite my minor misgivings, the original Halloween is nothing short of a classic and a testament to what can be done on a low budget. The combination of a great production crew, fantastic performances, and a scary villain helped Halloween become one of the most profitable horror films ever made. And while the sequels, remakes and slasher derivatives may have weakened it in the eyes of general viewers over the years, Halloween is essential viewing. Especially around this time of year. Because on Halloween, everyone is entitled to one good scare.