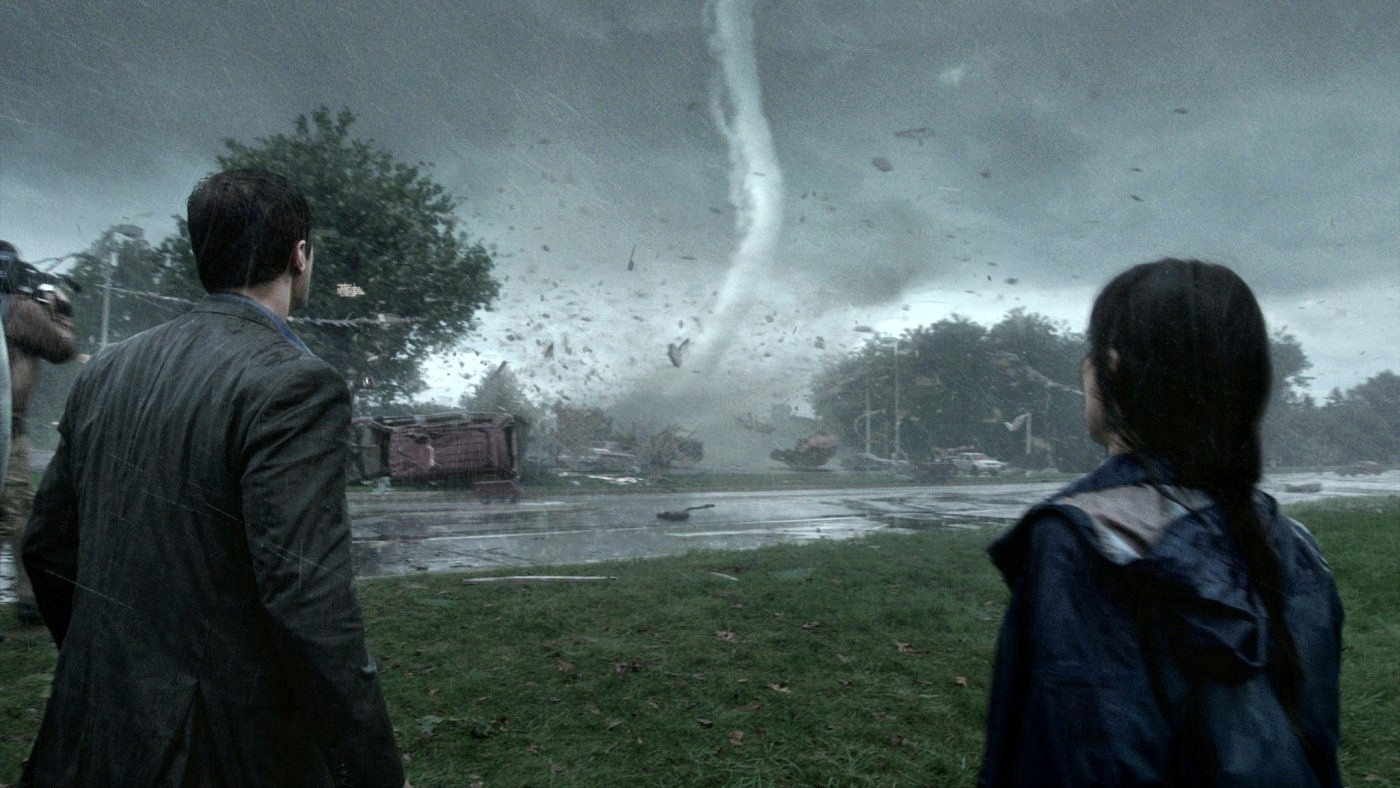 There are few things better than watching a film on a rainy day. Some films are even about rainy days. In fact, there’s an entire genre about adverse weather conditions. Director Roland Emmerich rose to fame because of them.

If you find yourself stuck inside on a rainy day, here are several appropriate films to help you pass the time away. While there are many disaster films about earthquakes and the end of the world, these films are about the weather. No matter how bad the weather is, at least it isn’t as bad as in any of these films.

Based on a true story of the 2004 Boxing Day Tsunami, The Impossible follows the (fictional) Bennet family as they attempt to find each other and survive in the aftermath of the tsunami. Featuring a young Tom Holland in his feature film debut, as well as an Oscar-nominated performance from Naomi Watts and an excellent turn from Ewan McGregor. The tsunami itself was achieved with a mixture of practical and digital effects, including miniatures. Holland and Watts spent several weeks in a giant water tank during filming.

Even for those who haven’t seen this one, it’s hard not to know about it. It seemed like the whole world had Frozen fever when it was released. The story of two sisters, Anna (Kristen Bell) and Elsa (Indina Menzel) and their bond, as they try to save their kingdom from an eternal winter. A more modern fairytale than some other Disney classics, it won Oscar’s for Best Animated Feature and Original Song for “Let it Go“.

A tornado scoops up sharks and heads towards land. That’s it, that’s a Sharknado. The series starts off with this simple premise, but later progresses to include a space battle and time travel! The hero, Fin (yes really) fights to protect his family and the world from the sharks flying through the air. It’s got plenty of cameos, from David Hasselhoff to George R.R Martin and even Jedward. Perhaps the weirdest part though, is that a sharknado is actually possible

Roland Emmerich directs this cautionary tale about climate change, following a scientist and his son as they try to reunite against the dawning of a new ice age. The film was a box office success, and though several scientists have issues with its science, they have applauded its awareness on the issue of climate change.

While John Carpenter may be more well known for his slasher and sci-fi films, he also took a stab at a weather-based horror. A hundred years after a ship mysteriously sank nearby, a small town is covered in a mysterious fog. Although it has since gained a bit of a cult following, Carpenter himself is rather dismissive of the film, due to the troubled production.

Written by Jurassic Park author Michael Crichton and produced by Steven Speilberg, Twister follows Helen Hunt and her estranged husband Bill Paxton as storm chasers, driving right into twisters in the name of science. Its special effects were nominated for an Oscar, and it gave us this cow scene. The shoot was full of injuries, like a crewmember being hit by a camera. Paxton and Hunt were actually temporarily blinded during the shoot, and someone was stook inside a collapsing house!

Cloudy With A Chance of Meatballs (2009)

Probably the least likely weather occurrence on this list (although you never know), water molecules in the air are turned into food. The result is a sleepy fishing town has rainy days of burgers and a snow day with ice cream. Directors Phil Lord and Chris Miller intentionally parodied disaster movies and explain the weather with lots of pseudo-sciences.

Also Read: The Greatest Horror Villains of Each Decade

Films are a big part of modern life. We quote, discuss and review them daily. But with thousands of movies released each year, what makes certain movies into a phenomenon? What is it about select movies that capture the public’s attention and makes them successful? Is there a formula to it?

Today we are going to explore a recent study and see what conclusions they have come to about how to make a successful film. We will look at the purpose of the study, highlight their findings, their methodology and highlight examples of where their findings can be seen today and places where the study falters.

The paper we are looking at is called, The Data Science of Hollywood. This study was made to see how certain emotions can affect the types of media that people want to watch. And how production companies can customise their products to meet the preferences of audiences.

To accomplish this the authors compiled 6174 feature film scripts and charted the emotional journeys presented in each. They did this by analysing the sentences used within the script, declaring them as either emotionally negative, neutral or positive and then charting their use over the course of the script.

The movies were then grouped into one of six categories:

They then compared this data with various sources to see how successful these different journeys were with audiences. They looked at box office takings, IMDb audience and critic ratings, award nominations and wins and number of viewers. So, what did the researchers find?

Of the six narrative categories, the researchers found that the Man in a hole stories tended to have a higher average box office gross ($37.48 million). Cinderella was the second highest ($33.63 million on average) and Oedipus being third ($31.44 million on average).

Particularly successful examples of the man in a hole story from the past year include Black Panther and Halloween (2018). Both were among the top 25 highest grossing films of 2018 and began with the characters leading relatively normal lives before something turns their existence upside down. But they eventually fight to reclaim their happiness.

However, there are less successful films in this category, such as Mortal Engines. Which charted the journey of a privileged citizen as he is exiled from his city and eventually destroys its corrupt government with the help of the rebellion. It was one of the biggest box office bombs of 2018. And garnered an IMDb audience rating of 6.1 and a critical rating of 44/100. Halloween (2018) also did not perform greatly with IMDb users and critics, only garnering a 6.6 from users and 67 from critics.

On average the study found that Man in a hole films received the lowest average ratings from IMDb users and critics. IMDb Users usually rated Rags to riches stories highest. Successful examples include Avengers: Endgame, which charts the emotional rise from the low point of Infinity War, and is both the most successful film of the year and currently ranked as the 19th best film of all time on IMDb. This shows that films associated with positive emotions tend to work well with general audiences.

Meanwhile, movies with higher critical ratings tended to be Riches to rags stories. Showing that critics favour tougher emotional journeys. Examples include Jordan Peele’s Us. Which charted the continual emotional decline of its characters and has an 81/100 rating from IMDb critics compared to a 7.1 from regular users. But still managed to gross $175,005,930.

There are however several areas where this study opens itself for criticism. Firstly, relying on IMDb ratings to gauge public opinion can cause problems as people only tend to leave feedback/reviews if they’ve had a negative experience which can slightly skew the results. And IMDb scores are usually given by a different audience than those who see the movie in theatres. Meaning that an IMDb score doesn’t necessarily measure the satisfaction of people who saw the film in cinemas and contributed to its box office.

And the oversimplification of the emotional arc categories is very confusing. For example, The Shawshank Redemption is given as an example of the rags to riches story which supposedly continually builds positive emotions, but the film still has several emotional low points throughout. Meaning that the categorisation of these films is somewhat flawed.

From this research we can conclude that the words of William Goldman hold true, “Not one person in the motion picture field knows for a certainty what’s going to work”. A film’s success at the box office does not guarantee audience or critical satisfaction. The use of IMDb as a method for gauging public opinion is also flawed. And the categorization is oversimplified and there are continual examples that prove the study wrong on an individual basis.

But this study did raise interesting points with its research. Showing that the most successful films may not be aimed specifically at critics or general audiences. Instead, they are the ones that generate the most discussion. And the mixture of positive and negative emotional arcs ensures the box office success of the man in a hole films because they appeal to the preferences of critics and audiences.

Also Read: Spoiler Etiquette: To Spoil Or Not To Spoil…