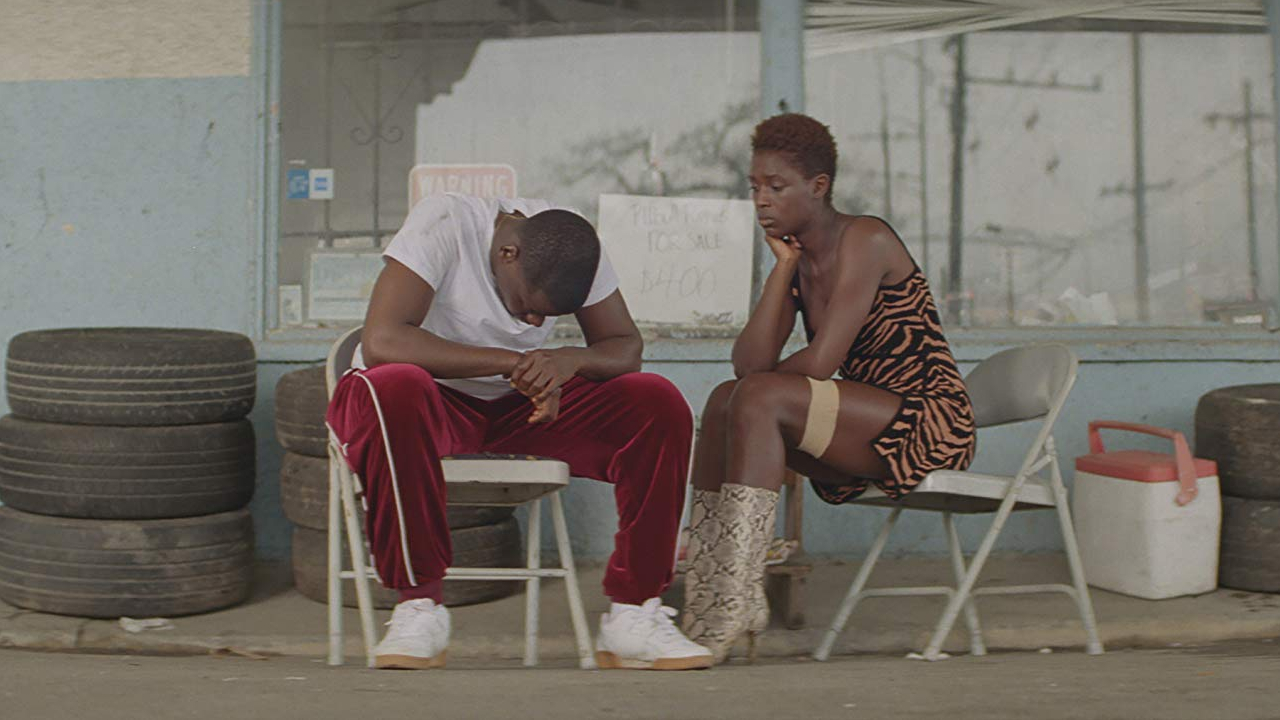 That classic films like Bonnie and Clyde, Badlands, Thieves Like Us and Thelma & Louise were a massive inspiration for many adaptations was proven throughout the years multiple times. Whether it’s for adaptions such as the television series Bonnie & Clyde or as a starting point for movies like Leaving Normal, their influence is never far away. Director Melina Matsoukas is now bringing those classics together in Queen & Slim, her directional movie debut.

Drive and never look back

We all know that a first date can be very awkward. After both swiping rights on Tinder, Slim (Daniel Kaluuya) and Queen (Jodie Turner-Smith) decided to meet up but the dinner date is sadly not going how it should be. It goes even from bad to worse when they’re driving home. What should have been just a routine traffic stop escalates into the murder of a white cop. According to Slim, his actions were in self-defense but as a lawyer, Queen knows how things look. As two black people, they will never be able to win from the white society so the only thing they can do is drive away and never look back. That’s exactly what they do!

Their tense journey involves many car changes, immensely nerve-wracking times and encountering people who could turn them in at any time. The further they travel, the bigger the manhunt for them becomes, especially after a video of the incident surfaces. While the cops see this as another reason to catch this “armed and extremely dangerous” couple, there’s also immense support for Queen and Slim. Their actions are being praised by the black community who saw the terrible event as an act of self-defense. Multiple riots break out and the confrontations between the cops and protesters become even more violent. How will the fight between black and white end and most importantly, will Queen and Slim be able to escape from the law forever?

Solid film on many levels

The strongest element of this movie is without a doubt the excellent leading performances. Kaluuya (Get Out, Widows) is extremely captivating as an ordinary man with an ordinary job. All Queen wants is living a simple life with a woman by his side in the hope someone will remember him once he’s gone. Kaluuya knows how to portray the many traits of his character. During the more quiet scenes, you can feel the strong emotional rollercoaster Queen is going through just by looking at Kaluuya and during the more rough scenes, the performance becomes literally and figuratively even more powerful.

Opposite him, we see Turner-Smith (Newness) making a wonderful debut as the attorney who puts her job above finding love. The remarkable performance brings out the cold, harsh and determined but also loving, insecure and fragile elements of Queen. Queen and Slim are both coming from different background and thanks to the excellent performances, those difference shines through. The final scene is certainly the most emotional and stunning one and shows the great chemistry between the two leads.

Another element that makes from Queen & Slim a compelling film is the modern and contemporary story written by Lena Waithe and James Frey. Topics that are included in this film such as racism, segregation, violence, and repression against black people are still incredibly present these days. The many obstacles Queen and Slim have to overcome in this movie are certainly obstacles black people are facing today as well. There’s also a grey area in Queen & Slim. While the runaway couple is being supported by the black community and wanted by white cops, some white people show sympathy and some black characters use violence against everyone (no matter the colour or race).

Not reaching its full potential

Sadly, there are a few minor glitches when it comes to Queen & Slim, which mean the film doesn’t fulfil its full potential. Large parts of this movie take place on the road and so we know that we can expect a lot of shots of the couple driving in the car. However, the many car changes also result in a multitude of those long driving shots which feel like we’ve seen them before. This makes it feel repetitive and like the film is dragging on. Because of the violence and topics, Queen & Slim could also have benefited from a little bit more punch and power.

To some, it might seem that Queen & Slim is a 21st Century rip-off of Thelma & Louise or Bonnie and Clyde. We get why this indeed could be the case. However, it’s so much more than that. With a very solid script, contemporary topics and with Kaluuya and Turner-Smith as a power couple, director Matsoukas delivers a very enjoyable directional debut.