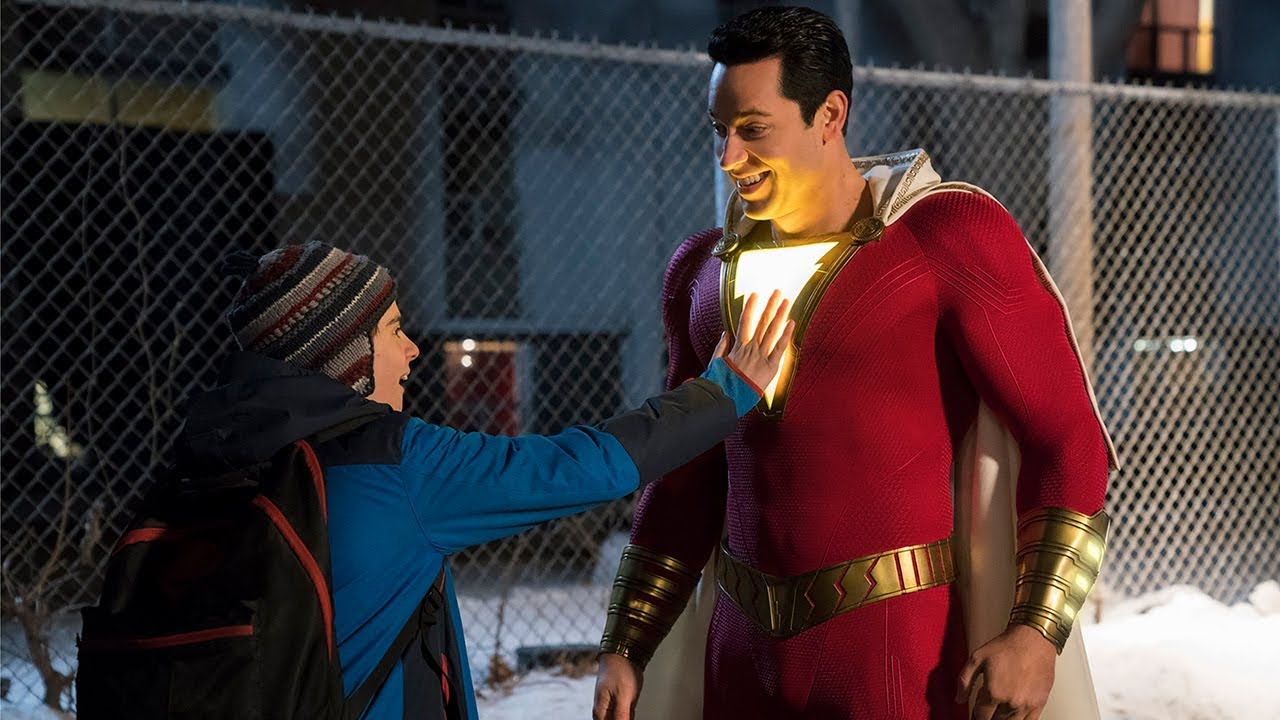 Comic book characters have been a staple of big Hollywood films for nearly twenty years now. But recently we have seen a growth in obscure and niche (by mainstream standards) comic book properties being used as inspirations for big box office hits. Guardians of the Galaxy, Aquaman and Captain Marvel have all scored big, using obscurer comic figures that many fans never thought would get their time to shine.

And now DC is trying their luck again, with the live-action feature debut of Shazam. But can the hero who was once considered more popular than Superman hit a home run with his first film outing?

The wizard, Shazam (Djimon Hounsou) is growing old and is searching for an heir to his powers, to protect the world from the seven avatars of sin. After searching for years, he finally chooses young orphan Billy Batson (Asher Angel). Billy is then granted the ability to turn from a teenager into a superpowered adult (Zachary Levi) by saying the word, “Shazam”. But Billy has no interest in being a hero.

Having been abandoned by his mother as a child, Billy has spent most of his life moving from foster home to foster home while looking for her. So naturally, he has a cynical streak that makes him ill-suited for his powers. But when Thaddeus Sivana (Mark Strong) a man rejected by the wizard years before, comes to claim Billy’s powers, Billy must prove he is worthy of them by fighting to protect the innocent and his foster family from Thaddeus’ wrath.

After several years of DC movies being unduly grim and gritty, it’s nice to see them becoming more fun. Although Shazam has dark moments, they feel appropriate. Because the story is about a troubled teenager coming to grips with the world around him. Ultimately though this movie is about family and childish power fantasy, and the script achieves that with gusto.

The empowerment side of the story works well. Billy, of course, begins using his powers to do childish things. Which is very entertaining. But slowly he realises that he must grow up and become responsible or he will become like Thaddeus. Turning the film into a coming of age tale where Billy learns that strength comes from those around you. Time is also dedicated to giving visibility to a spectrum of genders, sexualities and abilities. Before paying them off in an empowering way that many will find satisfying. Coupled with this the movie is incredibly funny, with Pop culture references and over the top childish wackiness ensuring a laugh from most audiences. Some may find the family side of the story clichéd, but it does add another level of emotional investment to the story.

I also really enjoyed the performances. Zachary Levi is of course the standout. Playing a child in an adult’s body can easily become creepy or aggravating. But when watching Levi his energy, enthusiasm, and sincerity capture your attention. He is a joy to watch as he channels his inner child and he easily carries the entire movie. Mark Strong also does good work as Thaddeus. Some may see Thaddeus as just another generic villain but the occasional moment where Strong lets the mask slip revealing something more childlike underneath really does work as a good foil for Levi. And many of the supporting cast also get their time to shine. Special mention goes to Cooper Andrews as Billy’s warm foster father. And Jack Grazer as Freddy whose comedic timing never fails to get a laugh.

But while I like most of what the film is doing, it’s sometimes a rough ride getting there. On the technical side, the CG used to create the avatars of sin and the action scenes never looks convincing or original. It’s all designs and feats we’ve seen done elsewhere. Thankfully the film does not rely too much on these but when it does it becomes too unreal and generic to engage. Which does become a problem in the third act.

As well as this, the films occasional overreliance on humour undermines the attempt at eliciting emotion from the family storyline. With pathos sacrificed for a joke. And when so much of the film relies on humour there is the risk of alienating the audience if they are not engaged by the jokes. Which did happen a few times with the audience I saw the film with.

Lastly, the film does occasionally slip into the same pitfalls as many other movies. Some of the feels forced and unnatural, particularly Thaddeus’ family and the bully characters. There are also segments that could have been tweaked to make a better impression on the audience. For example, the fight between Billy and the bullies, which doesn’t happen simply because they are hurting Freddy, but because they insult him not having parents which Billy takes personally which makes him seem more selfish than he needs to be. And of course, DC can still think of no other way to end a film than by having a big fight with indiscriminate CGI bad guys. Which is especially disappointing here because the character focused conflict between Billy and Thaddeus is way more interesting than the generic avatars of sin.

Shazam! is a mixed bag. It is brought down by unconvincing CG villains as well as an occasional overreliance on humour to the detriment of other parts of the narrative. The lack of attention to minor details in the story and occasionally bad acting also drags the film down. But it still feels like a breath of fresh air among modern superhero movies. It is an almost perfect example of what the genre is meant to be, wish fulfilment for little kids. Buoyed by fun performances, a fantastic sense of humour and a script that nicely treads the line between sincere and goofy.

It is impossible not to have a good time with Shazam!. It isn’t a genre redefining masterpiece nor is it an exceptional film, but it’s a damn good version of what it’s trying to be.

Shazam! is in UK cinema on from Friday 5th April.