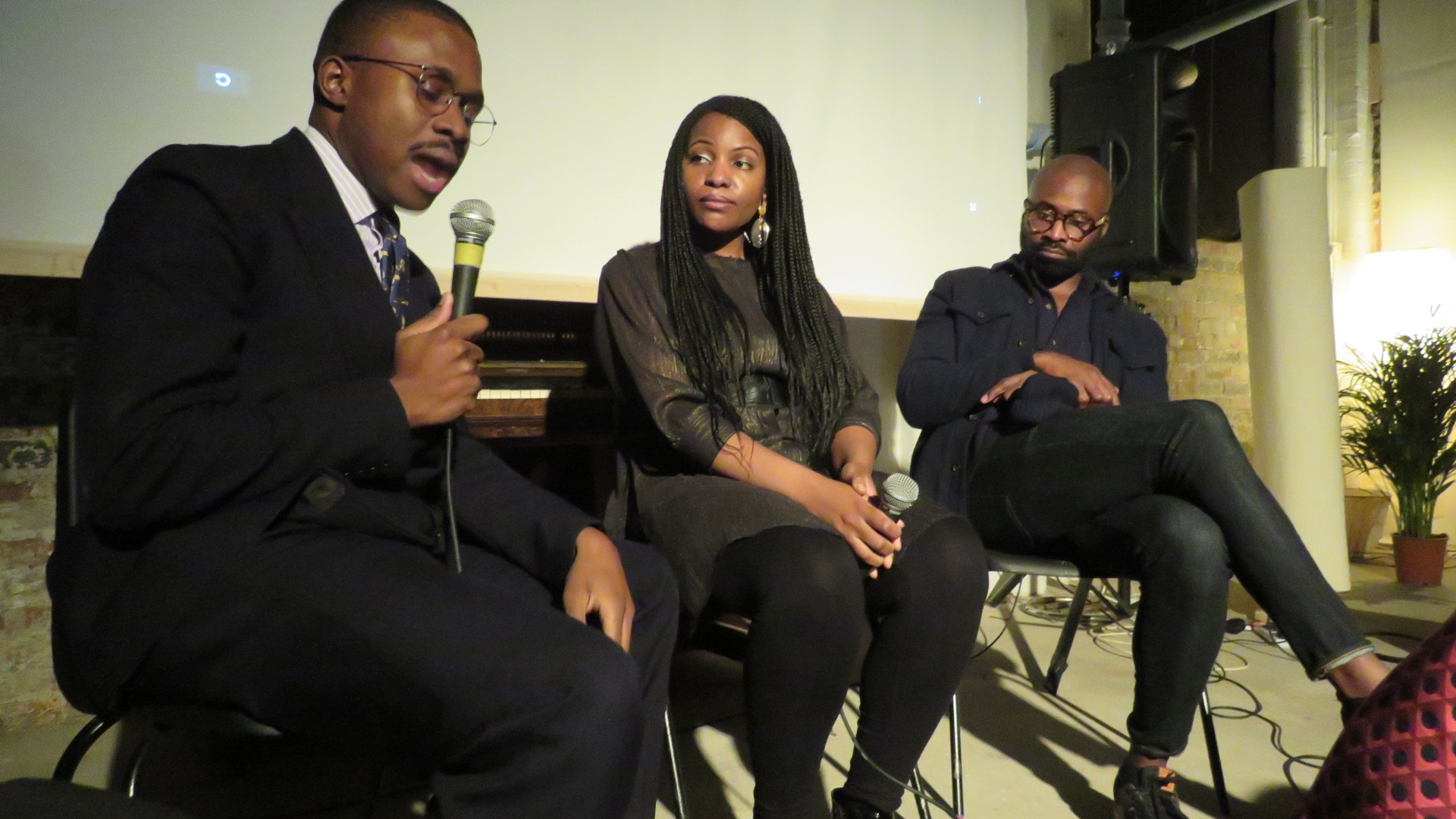 On the 17th December 2018, London-based , Tomisin Adepeju held a screening event which may very well act as a catalyst for a new movement: the rise of Nigerian-British Filmmakers.

The event featured screenings from fellow Nigerian-British filmmakers, Candace Oneyeama & Adeyemi Michael. Following the screening, there was a rich and vibrant discussion on issues related to cultural identity in filmmaking, film funding and connecting with audiences, specifically among the Nigerian & African diaspora communities in the UK.

Comedian, Sir Lenny Henry recently brought a petition to the Prime Minister regarding the lack of ethnic minority inclusion within UK TV (specifically in the writing and production process). He cited that “only 2% of UK television is made by directors from BAME backgrounds” (despite making up 13% of the UK population in the 2011 census). Similarly, ethnic minorities’ employment in the film production sector currently stands at 3%. Will this new wave of Nigerian-British filmmakers help change this around?

We spoke with Tomisin Adepeju and Candice Onyeama within this emerging movement to see what the future holds for Nigerian-British filmmakers.

[BPFC]: What is the inspiration behind putting together the event “Re-imagining Nigerian-British Cinema”? What did you feel you got out of the event?

Tomisin: I have been thinking about putting together an event like this for a long time. My own personal growth and development as a filmmaker coupled with my discovery of brilliant work by talented filmmakers like Adeyemi Michael, Shola Amoo, Destiny Ekaragha, Joseph A. Adesunloye, Bola Agbaje, Akinola Davis Jnr (aka Crack Stevens) Candace Onyeama, William Boyd and so many others, undoubtedly confirmed that there was a profound movement that ties all of us together. My primary motivation for putting on the event was to really highlight what I feel is one of the most exciting, cinematic movement that is currently happening in this country. Since graduating from film school three years ago, I discovered that there was a growing crop of filmmakers telling stories that were very similar to the work I was doing, the films they made were directly influenced by their culture, roots and identity as Nigerian-British individuals. The movement is culturally specific but within that exists a broad range of bold, diverse stories that beautifully captures and reflects the Nigerian, Diasporic experience.

Both your short films “Appreciation” & “The Good Son” are culturally-specific in how they deal with aspects of community/family life of the Nigerian diaspora within the UK. How has this approach been received by the diaspora community? And has this response been different to the wider mainstream audience?

Tomisin: I have been incredibly humbled by the reaction of my work by the Nigerian Diaspora community, the response and feedback been positive. I have really tried to create work that speaks directly to that specific cultural experience. Also, the fact that audiences have reacted so positively has really justified the type of stories I’m telling. It’s wonderful to know that there is an audience that to see more films that acutely explores the lives of Nigerians in the diaspora; films that feature characters boldly speaking the languages; Yoruba, Igbo or Hausa. Regarding the response of the wider mainstream audiences, I always utilise the work of one of my cinematic heroes; Yasujiro Ozu as a reference point, his work has been widely celebrated and praised by critics and audiences. He made films that beautifully captured the nuances of his culture and roots, his work celebrated Japanese culture and its way of life, his stories transcended race and are incredibly relatable. Thus, I feel that if the wider, mainstream audience can relate to Ozu’s stories, they can equally relate to the stories I am telling. One that a viewer can relate to regardless of their culture and background, just like Ozu, I want to tell human stories.

Is there a feature film in the works? What do you have planned for the future?

Tomisin: Yes there is, I am currently prepping my debut feature film which I am planning to shoot this summer, its an adaptation of my short, The Good Son (Omo Daada), I am very excited about realising that project. I am also developing several TV projects as well, one of them is a period drama that follows a young middle class Nigerian man who moves from Lagos to London in 1867.

Presh [BPFC]: Within the U.K we’ve seen Afrobeats music have some mainstream crossover success, however, films & TV programmes exploring British-Nigerian life haven’t been explored in any great depth, why do you think this is?

It’s difficult to pin it down on a single cause but there is a shortage of mainstream films and tv programmes exploring black lives in general in Britain. Also, black screen representation that we do find tends to be monolithic rather than reflective of the rich diversity of African diasporic cultures that make up Britain today. So Nigerian-British, Ghanaian-British, Somalian-British and a host of other African diasporan experiences don’t get the on-screen exploration they deserve. However, the short film and indie landscape is different, with Nigerian-British and African descent filmmakers pushing to get our stories out there with whatever resources we have. We’re taking ownership and telling our own authentic stories of African diasporic Britain and getting it out to audiences through festivals, online, our own curated events, basically in any way that we can and there is an audience for it. So if the mainstream British film and TV industry is really interested in diversifying our screens and catering fora large and ever-growing section of their audience, they’ll have to catch up soon.

In your short film “Once An Old Lady Sat On My Chest” you made an important decision to use a mix of both English and Igbo. What effect does that have on the tone of the film?

In all my films so far including my first film HUSH, I incorporate both Igbo and English. Most diasporans can relate to the feeling of living between two or more cultures not just physically but also linguistically. We often talk about ‘code-switching’, using our accents or languages to navigate different social and cultural spaces, with a lot of us having the ‘home’ language or accent we use with our families. As the protagonists in both my films are Nigerian-British, it was important for me to bring audiences, not just visually but aurally, into their diasporic worlds.

Are there aspects of the Nollywood film industry that British-Nigerians (and British-Africans) as a whole can learn from to improve how those stories are told and released?

Absolutely! I’ve got a lot of admiration for the hustle, boldness and beautiful audacity of Nollywood. Its pioneers are visionaries who were self-taught and with very little resources, managed to transform their dreams to a multi-billion dollar industry. I think that entrepreneurial spirit and daring to think outside the box, without constantly seeking the validation of the industry is something we can definitely learn from in the diaspora. Moaning less would be great too, but I think unfortunately we’re still a bit too British for that.

Another thing about the Nollywood industry is that it unapologetically speaks to its own demographic  – Nigerians – and it works. We need to learn as diaspora filmmakers to start making works that can cater to diaspora audiences rather than fretting about the ‘outside gaze’ and falsely believing our experiences may be too niche to be understood. I’m not from the American West and have never experienced a rodeo but I can tell you what it is from all the Hollywood films I’ve watched – strong human stories will always resonate universally no matter who the community is. I also believe that we are very fortunate as diaspora filmmakers to be able to access two cultures and two separate film industries, so let’s use it

Director, Destiny Ekaragha has also served as a trailblazer for this movement, she’s only the third black woman to have directed a feature-length film that was given theatrical distribution in the UK. This was for her 2014 British-Nigerian comedy Gone Too Far.

Filmmaker, Adeyemi Michael has found recent success with his short film Entitled, which was commissioned by Channel 4. The London-based filmmaker has most recently held an screening of his film in Lagos, Nigeria. Highlighting what can be achieved by having access to both Nigerian and UK audiences.

Shola Amoo released his debut feature A Moving Image in 2016. Shola’s second feature film The Last Tree, which debuted at the Sundance Film Festival, has already been picked up by Picturehouse and will be released later this year. The film is a coming of age drama following a British boy of Nigerian heritage as he moves to London.

Whilst there is still a long way to go to in truly breaking through the “glass ceiling”, this crop of Nigerian-British filmmakers are a welcome sign of the positive change that’s happening within the UK film industry.

As part of its global expansion, Netflix is investing in both original programming and internet infrastructure in Africa. And with Nigeria’s Nollywood being the second largest film industry by volume (3rd by revenue), it seems likely that they’ll be an increasing demand for filmmakers who can appeal directly to the burgeoning Nigerian and Pan-African film markets, but also whose work can tap into the African diaspora both in North America and Europe. This means this movement of Nigerian-British filmmakers are in a position to potentially take advantage of upcoming changes in the Streaming Video On Demand (SVOD) sector. Particularly with the emergence of Disney+ & Apple TV+ platforms companies will need to become more inclusive in their programming to remain competitive.