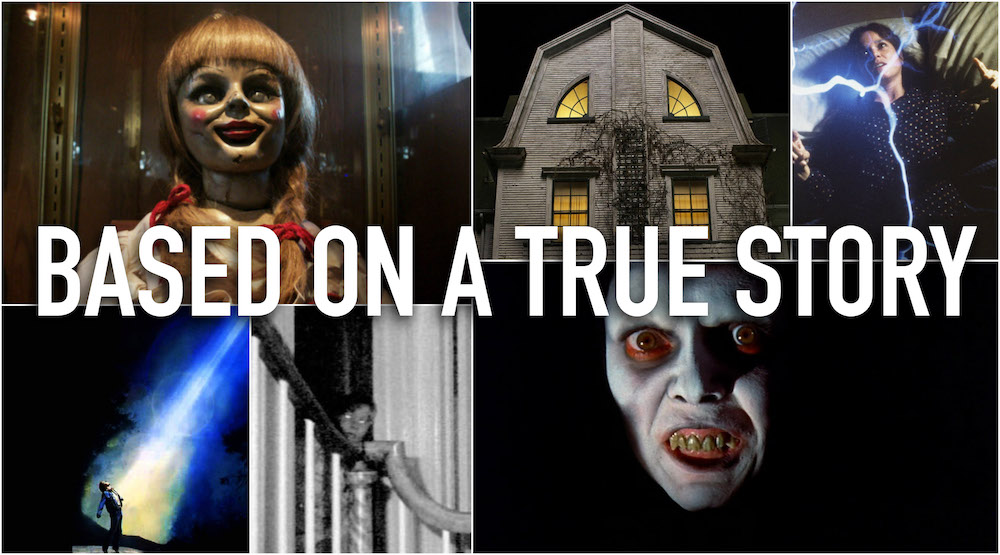 “Based on a true story”. While those words should always be taken with a pinch of salt these claims of truthfulness do contribute to the audience’s experience. The idea that what you are watching isn’t far removed from reality makes the narrative feel more real and immediate, which horror films need to be effective. And these real-world horrors should be known alongside the movies they inspired.

So, today we are looking at the real-life stories behind five famous horror films. Warning, there is upsetting content ahead.

In 1973 Sally and Franklin Hardesty and their friends head to Texas to check that the Hardesty’s grandfathers’ grave hasn’t been the victim of a series of grave defacements and robberies. But while there, they run afoul of a group of vicious killers’ intent on killing them all.

Texas Chain Saw Massacre drew a lot of inspiration from the story of Ed Gein. Gein was a killer and graverobber who operated in Wisconsin in the late 40s and early 1950s.

Gein was apprehended in 1957 as a murder suspect. When the police searched his home they discovered many disturbing sights. These included lampshades and masks made of human skin and a heart in a plastic bag near the stove. This lead to rumours of cannibalism, though this was never definitively proven. These elements were subsequently filtered into TCM’s set design and the characters of Leatherface and his cannibalistic family.

The Town that Dreaded Sundown (1976) & The Phantom Killer

An early proto-slasher and pseudo-documentary, The Town that Dreaded Sundown tells the joint narrative of the Phantom Killer, as he stalks and kills several residents of the town of Texarkana, and the police working to track him down.

The film was loosely based on the 1946 Texarkana moonlight murders. Where, over 10 weeks the Phantom Killer attacked 8 people and killed 5, sending the town into a panic. The state police did investigate, but the killer was not caught.

After it’s release several lawsuits were filed against the film. The brother of one of the victims sued the production over the derogatory portrayal of one of his family members. And Texarkana officials themselves filed a complaint against the movie’s marketing, which apparently unnerved the townspeople (including the victims’ families) by saying that the killer “still lurks” around the town.

Both the 1979 and 2005 Amityville Horror’s tell the story of the Lutz family, who moved into a new home where the previous residents were murdered. They soon begin experiencing many spooky goings-on. And it becomes apparent that they are in very real danger in this house.

Both films are based on the book of the same name, which claimed to be a true story. Several story aspects, including the DeFeo killings, where Ronald DeFeo Jr. murdered 6 members of his family in their home, and the Lutz’s moving into the former DeFeo house for a short time are true.

After the 1979 film’s release, the judge presiding over a case involving the fraudulence of the book declared that he believed the book to largely be fictitious. Later, the real George Lutz sued the makers of the 2005 remake (which claimed to be based on a true story), for defamation. But he passed away soon after.

The 1984 horror masterpiece concerns a group of friends plagued by horrific nightmares. All involving the razor glove wielding, burn victim Freddy Krueger. But while their parents think they’re just nightmares the kids soon realise that if they die in their dreams, they die for real.

Wes Craven stated that the inspiration for the film came from a string of LA Times articles about south-east Asian refugees in the 1970s. Many of these people refused to go to sleep after suffering from disturbing nightmares and were later found to have died in their sleep. Craven then took this inspiration and imagined that a dream figure was responsible. Thus birthing one of the most iconic killers in all of cinema.

Silent Night, the remake of 1984’s Silent Night Deadly Night, focuses on a police officer who must hunt down a killer who has come to her town for the holiday season. But being dressed as Santa, the killer will be difficult to find.

While most of the film is typical slasher movie fair, during a flashback we learn of a man believed to be the killer who took a homemade flamethrower to a Christmas party and used it to kill his ex-wife.

This part of the story is based on the 2008 Covina Massacre where Bruce Pardo killed 9 people at his ex-wife’s Christmas Party while dressed as Santa using a homemade flamethrower and several handguns.

And, so ends my look at the real-life stories behind 5 famous horror movies. Proof that sometimes reality is more terrifying than any movie.