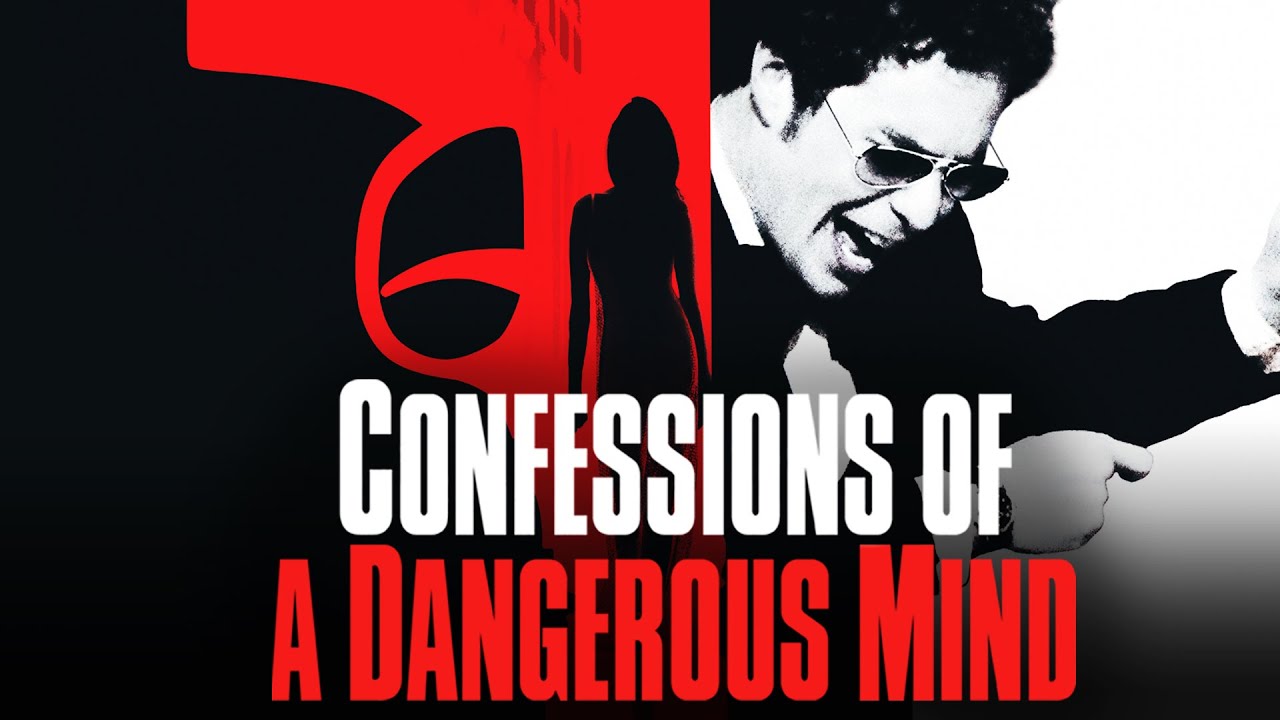 This film was released in 2002 and in my opinion, is an underrated classic, a film that covers a dozen genres and never settles on one, ranging from romantic comedy to spy thriller to existential exploration. Despite a decent rating of 7 of IMDb it seems to have slipped from cinematic consciousness. Confessions Of A Dangerous Mind was the directorial debut of George Clooney and was the start of an up and down career as a director, in my view, this is his best film. The screenplay was written by Charlie Kaufman, a writer and director behind such weird gems as Being John Malkovich and Eternal Sunshine of the Spotless Mind.

“I am responsible for polluting the airwaves with mind-numbing, puerile entertainment. In addition, I have murdered thirty-three human beings.”

Okay, there’s a bit to explain about the background of this film. Confessions of a Dangerous Mind is based on the book of the same name by Chuck Barris, not a household name in the UK but he is very famous in America as the inventor of hit TV shows like The Dating Game (Blind Date to us Brits), The Newlywed Game, The Gong Show and others. That already might be enough for an interesting film but in the book Barris claims that as well as being a TV producer he was a hitman for the CIA. The film explores both aspects of this bizarre life.

“Rather than killing ourselves trying to find good acts… we just put on bad ones and kill them!”

Sam Rockwell plays Barris in what was a string of roles of Rockwell playing oddballs, Clooney is his CIA handler, and Drew Barrymore is Barris’ on again off again girlfriend – the two have an exceedingly modern relationship. Julia Roberts and Rutger Hauer pop up to round out the spy team and there are great cameos for the contestants of The Dating Game.

Rockwell is brilliant as Barris. He plays a distinctly unlikable character – manipulative, violent, cruel while at the same time having genuine charisma. Barris’ impact on television was huge and Rockwell pitching The Dating Game is a surreal moment of someone suggesting something that is in many ways obvious but nobody had done it. Barris is never content and always coming up with new games – including the incredibly titled The Game Game – and just his desperate and at times ingenious climb to the top of television is riveting. Then comes the CIA. Barris kills people, personally, with his own hands and the CIA is hardly particularly scrupulous about who ends up dead. Rockwell manages to hold the idea that these two very different careers can be successfully combined in one man.

Clooney is a typical 1950s Cold War American establishment type, constantly tempting Chuck with the more interesting and more perhaps more fulfilling life of a hitman. Drew Barrymore is charming as always as the hippy free-spirit woman who will just about put up with all of Barris’ nonsense (bear in mind she knows nothing of his CIA double-life).

“When you are young, your potential is infinite. You might do anything, really.

The film really is about Chuck Barris and his idea of success. He takes up the CIA hitman job when he thinks his life is going nowhere and as soon as he becomes successful regrets this rather extreme side of his life. Barris is extremely driven, starting in the NBC page programme (the same programme as Kenneth in 30 Rock is part of) and determined to work his way up. Barris is also quite odd – he regularly starts fights in bars despite being no good at fighting, his dating life is somewhat unusual and is also comfortable killing people. It may be noticed that what Barris makes are game shows, exceedingly low rent gameshows as well, The Gong Show was a talent contest and in the film Barris is credited with having the idea that a talent show doesn’t need people with talent – in fact, it’s more entertaining to watch talentless people fail. Throughout the film people confront Barris about making “garbage” television, with him putting on a veneer that success is all that matters but there is the lingering feeling that that is not the truth. After all, this is a man who legitimately wonders what’s a better life – making gameshows or killing people?

“I’m not killing people… my future’s in television”

Not long after the book was published Barris admitted that he had never worked for the CIA, he had simply made that up. Apparently, in his youth, he had applied for the CIA but had been unsuccessful and this book was partly imagining what that life might have been like. This is never really addressed in the film although the audience is prodded to question just how a reliable narrator Barris is.

For me this film is all about Barris trying to work out if his life was well-spent, was he successful, whatever views he really had on his television shows, whether he saw them as successful light entertainment that made people happy or he thought them brain-dead garbage we don’t know, but it is perhaps telling he had to invent a whole other life for himself as a CIA hitman so perhaps he wasn’t entirely satisfied.