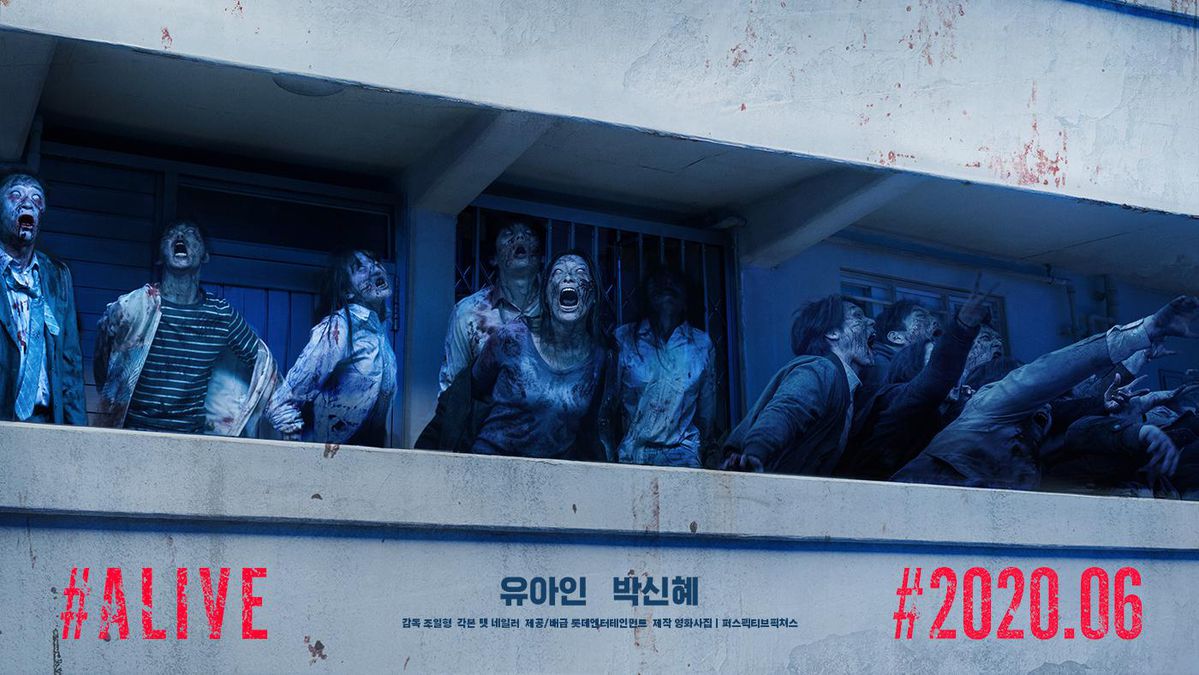 Zombies have definitely become overexposed in the past decade, but does Il Cho’s recent zombie film #Alive offer anything new? Join me as I review the Netflix original to see if it’s worth checking out.

Oh Joon-woo (Yoo Ah-In), who lives with his family and spends most of his time streaming himself playing videogames, wakes up one morning to find the news talking about the spread of a disease that is causing people to become rabid and consume human flesh. He soon becomes trapped inside his parent’s apartment. Although he posts a rescue request on social media, he soon faces the prospect of surviving on his own. Driven to despair he thinks about ending his life. However, he is saved when he finds another living person in his apartment complex, Kim Yoo-bin (Park Shin-Hye). Finally having something to live for they both decide to manoeuvre to the top of the complex to be safer. But is it really as safe as they think?

With the themes of disease and isolation playing on everyone’s minds this year, #Alive seems very relevant. And the way it explores these themes feels quite captivating from a cinematic perspective. In the first half, the film has long stretches without dialogue. As Joon-Woo attempts to navigate through the world’s ever-growing craziness. And sometimes Joon-Woo speaks to himself or people who can’t respond. Which is a very accurate dramatic way of showcasing the isolation and growing mania of the main character. The film conveying information to the audience through television news and social media also feels very realistic. And is an effective way of placing us in Joon-woo’s perspective.

Coupled with this the film has some fantastic central performances. Yoo Ah-In is impeccable as the immature tech-obsessed Oh Joon-Woo. Managing to make us laugh at his obliviousness and over the top actions while also making us empathise with his position. Park Shin-Hye is also really good as survivalist Kim Yoo-bin. She’s very much the straight person to Joon-woo’s more animated personality, and her cold put-downs of him are very funny. Combined with this she is also a very warm presence in her private moments and she really sells her action-heavy scenes. Making her into a funny heroine who knows how to handle herself in a hairy situation but still has a very relatable human core. And special mention must go to late player Jeon Bae-soo who leaves a great impact as the only survivor on the top floor, with an outwardly inviting attitude hiding something sinister.

Unfortunately, #Alive is held back by much of its story feeling rather generic. Most of the film’s plot beats – the outbreak, failure of the government to respond, survivors teaming up to take on the horde – are by now standard for zombie films. Making #Alive seem very stale. While the potentially refreshing elements (the idea of facing the peril alone or how social media might affect someone’s understanding of the apocalypse) are either underdeveloped or are jettisoned by the halfway point. Which leaves the film feeling like just another zombie movie with some half-hearted gimmicks added on.

The production work is also lacking. With the constant jump cuts being very distracting; making the film seem rather amateurish instead of contributing to any sort of presentational effect. The lacklustre musical score also adds little to the overall experience. Not to mention the only standout visual decision is to incorporate drone footage into the narrative. Otherwise, the film’s visual presentation is very conventional. Leaving little of interest from a stylistic perspective.

Finally, the film’s climax feels very out of step with the rest of the film. With the ever-darkening tone suddenly dropped for a hopeful ending. It sees the two main characters rescued by the army because of Joon-Woo’s social media post. Not only does this feel tonally contrary to the rest of the movie but it also feels very implausible. As the post was made days before the rescue effort. Meaning there was no guarantee that the main characters were still alive. So why would army resources be used on this? And with the film focusing little on social media outside of the first act, this conclusion feels inappropriate.

#Alive has some great central performances. As well as some unique ideas for how to explore isolation and the spread of disease. With that said #Alive is let down by not committing to its more interesting ideas. The result is a project that despite some inventive ingredients ultimately becomes like every other zombie movie. Which is further diminished by some poor production decisions. As well as the out-of-place conclusion. Consequently #Alive is little more than a fun disposable distraction.