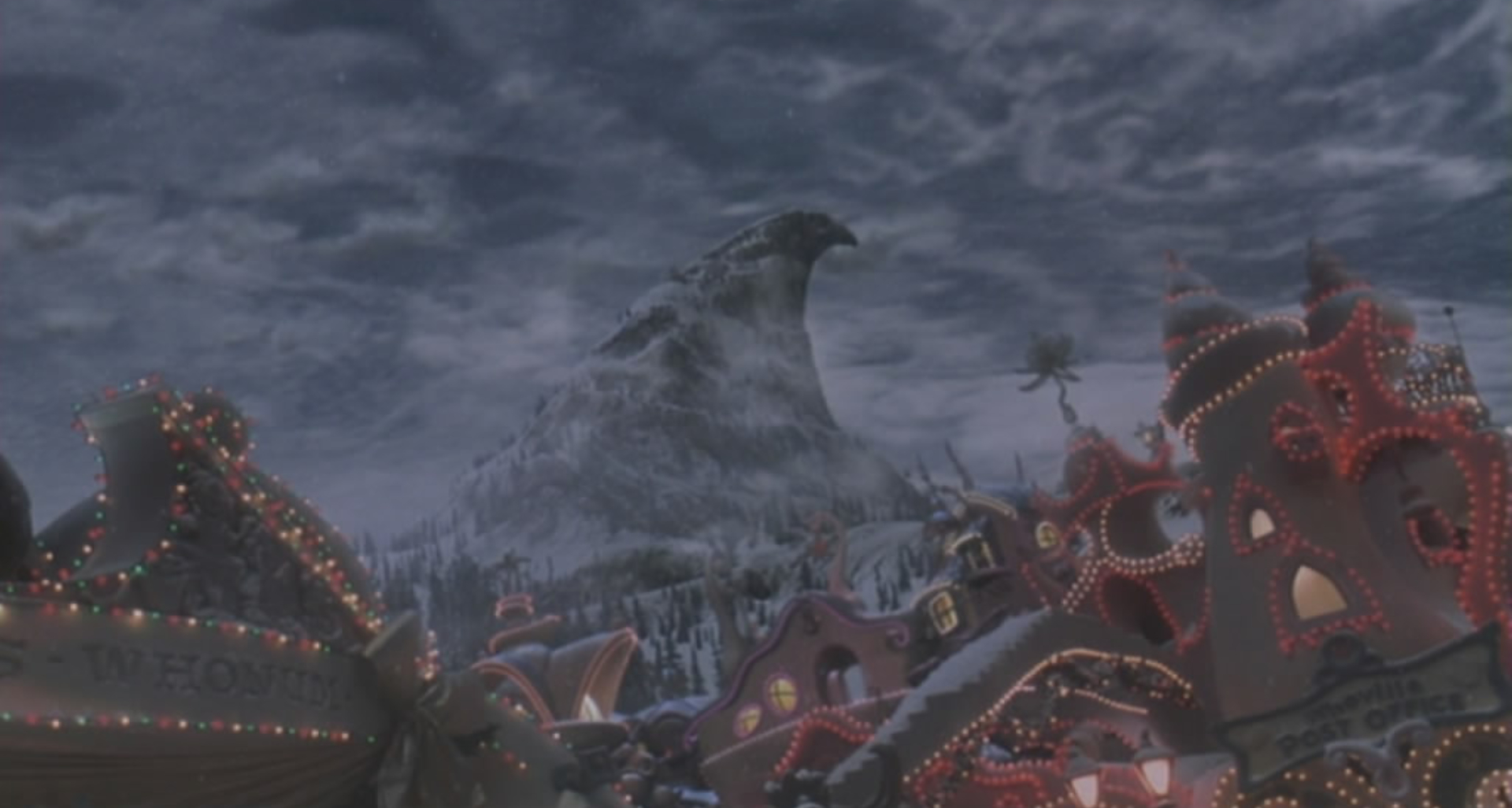 How was Dr. Seuss’ cartoony Christmas classic translated into a realistic world? Today we’ll look at how the world of How the Grinch Stole Christmas (2000) was created. Focusing on the realisation of Whoville’s snowflake world; the costumes/makeup of the Whos and the Grinch. But first, let’s look at the film’s inspiration.

Dr. Seuss’ book drawings are very much aimed at children. Much of his scenery and objects are warped and lack straight lines. The people have weirdly long bodies, round chests, and stomachs; their faces being more prominent above their top lip. And the Grinch looks oddest. With fur covering his body. A figure-eight shaped head, large around his mouth and smaller near his eyes. And animalistic facial features such as whisker holes and an upper lip parting. How can you make something so cartoony work in live-action?

Director Ron Howard and producer Brian Grazer wanted the film to feel true to Seuss’ world, so the crew set to work accomplishing this goal.

Production designer Michael Corenblith and his team broke down some of Seuss’ reference points and worked them into the sets. Whoville was structured like a medieval village, the Christmas tree being the central hub. The town hall was modeled on Greek architecture, Farfingles department store on Parisian art nouveau and Moroccan and Islamic architecture elements were also included. Resulting in a world that looks timeless and very Seussian.

Props also needed to be considered. Prop master Emily Ferry and her team sourced items from antique shops and retrofitted them into new designs reminiscent of Seuss’ wavey retro style.

Then the film was given some finishing visual effects touches. This included filling out shots with computer-generated Whos and adding digital backgrounds and skies to fill in the world. But arguably the most important creation is the opening. Inspired by Horton Hears a Who the opening places the story within a single snowflake. We track through the snowflake until we see a full view of Mount Crumpit and Whoville. All of this was created digitally. This effort makes the Grinch’s world feel truly fantastical.

Every Who down in Whoville

Producer Brian Grazer wanted the Whos to look otherworldly but predominantly human and “cute” to contrast the Grinch’s monstrosity. According to special makeup effects designer Rick Baker, the designs were difficult to perfect as some Seussian elements, particularly the focus on the nose, looked frightening. Eventually, they found the right design. Then they had to work on outfitting all the actors to look like Whos.

The production team made foam rubber pieces to apply to the actors which gave them prominent noses and a big gap between their lips and noses, with a faint edge that blended into their skin. Several Whos also received fake ears and brows to complete the otherworldly effect. Costume designer Rita Ryack also made creative costumes that allowed each Who to stand out. Lastly, the Whos were given dentures and inventive wig/hair designs that suited Seuss’ illustrations.

For Rick Baker, the biggest challenges when creating the Grinch were finding a design that looked recognisably Grinchian and wouldn’t limit Jim Carrey’s facial expressions. To achieve the design, he made the makeup as thin as possible in certain areas to allow Carrey to move his face. The makeup took approximately two and a half hours to apply and one hour to remove.

Carrey also wore a spandex suit covered in green-dyed yak hair (the green colouring was inspired by the 1966 Chuck Jones cartoon) to give him that iconic look. Which must have been boiling under all those set lights. According to Carrey, Brian Grazer hired someone responsible for training CIA operatives on how to endure torture to get Jim to stay, the process was that taxing.

Fortunately, the work paid off.  The film was the sixth highest-grossing movie of 2000. It won Rick Baker and Gail Rowell-Ryan an Oscar for Best Makeup and received nominations for Best Costume Design and Art Direction-Set Decoration. The film also made Jim Carrey’s Grinch and the live-action Whos iconic pop culture figures and has captured many imaginations for the past two decades.