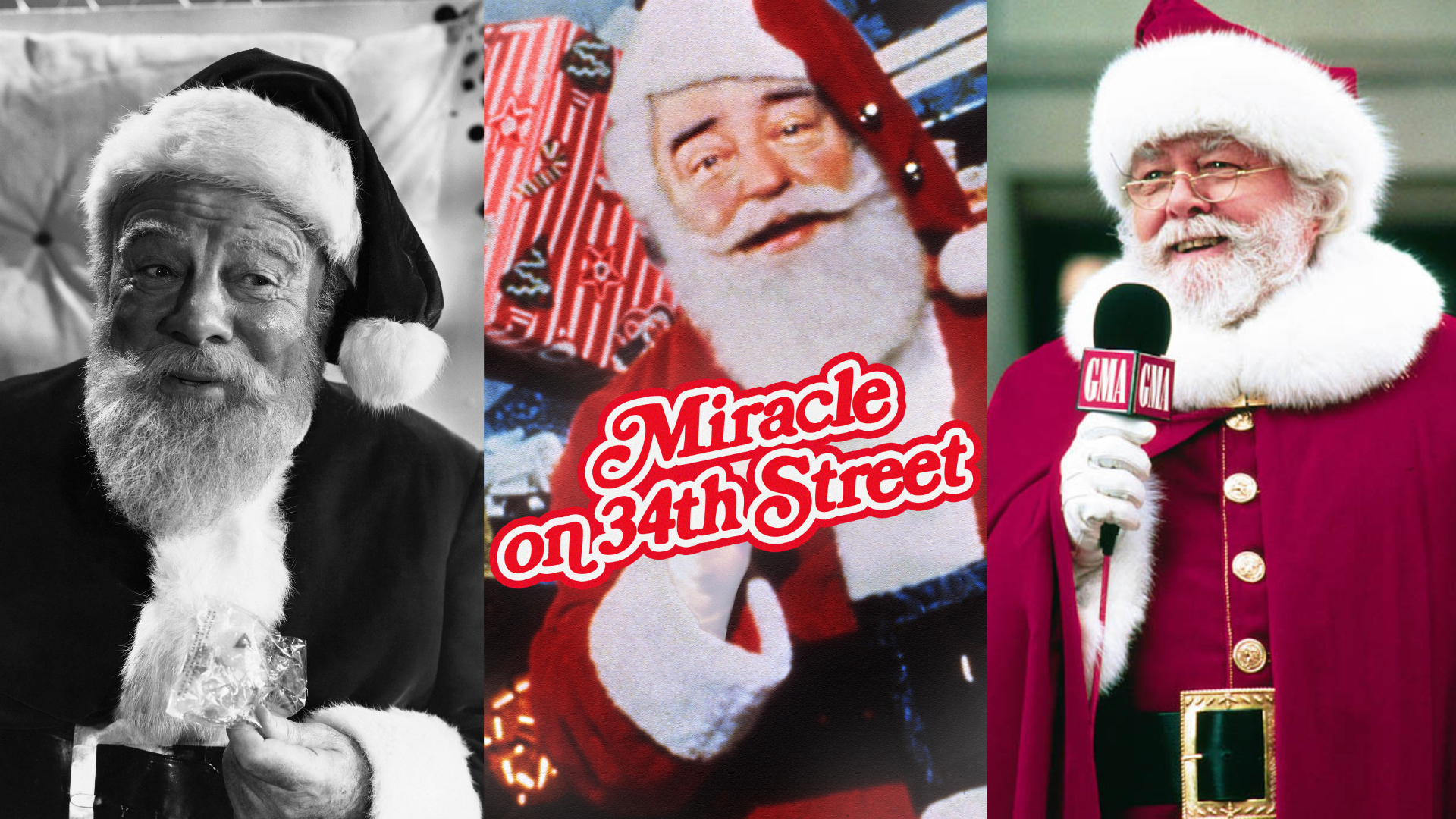 The Miracle on 34th Street films are the perfect antidote to Christmas cynicism. They are about an old man who thinks he’s Santa Claus and how his selflessness conflicts with the modern world. It shows that sometimes we need to believe in the impossible to better ourselves and the world around us. But which version did it better?

Today we’re comparing the 1947 classic, the 1994 remake, and the 1973 TV movie of Miracle on 34th Street. We will analyse the films in several categories to determine which movies performed certain things better. And at the end, we will tally up the score to see which Miracle is the best. Let’s begin.

Who is the best Kris Kringle?

First let’s explore the story’s central character, Kris Kringle. The old man who believes he’s Santa Claus. Over the years this role has been played by Edmund Gwenn, Sebastian Cabot, and Richard Attenborough. But who is the best St. Nick?

From the outset, Sebastian Cabot’s Kris Kringle is far too mean and bitter to be considered a good Santa. Even if the filmmakers were trying to make Santa more mean it doesn’t fit the film’s otherwise light tone. Either way, Cabot’s Santa cannot beat his competitors.

Conversely, Edmund Gwenn feels like the real Santa. Despite his stern streak, which comes out when people abuse his friends or don’t take the responsibility of Christmas seriously, he also emits an aura of pure warmth and joy. The happiness on his face when he makes children smile and the jolly nature he has towards life is infectious. He deserves the name, Kris Kringle.

Richard Attenborough’s performance chooses a very different angle. Throughout the film, he subtly hints, through doubtful looks in his eyes, that he doesn’t believe he is the real Father Christmas. But his all-around loveable nature gives the impression of a regular man trying to show it is possible to live your life with the spirit of Christmas. He also lacks Gwenn’s harder edge. Making him closer to the modern image of Santa.

Ultimately Gwenn and Attenborough are too good to choose between. Gwenn feels like Father Christmas translated into the real world. Attenborough feels like an ordinary man trying to accomplish the impossible task of being Father Christmas. Both portrayals offer something intriguing and both actors do fantastic work. Therefore, they have both earned the title of Kris Kringle.

Who is the best Susan?

Next, we must consider the story’s other central pillar. The young disbelieving girl who Kris tries to turn into a believer by granting her wish for a house and also a family.

Again the 1973 Susan comes nowhere near the other versions’ quality. Suzanne Davidson does fine with the material. Unfortunately, this script makes Susan feel like a brat who deserves nothing for Christmas.

However, as with Kris Kringle, the 1947 and 1994 Susan’s are characterised differently but are equally interesting. Natalie Wood (1947) and Mara Wilson (1994) feel like real children rather than actors. An incredible example of their abilities as child performers.

Natalie Wood’s Susan is a precocious young person whose knowledge has gone to her head. But this characterisation makes it very satisfying when Kris begins convincing her that sometimes it’s better to have a child’s faith. Rather than being wholly realistic. It’s a testament to the writing and Wood’s performance that Susan never becomes unlikable. She just feels like a child realising that everything isn’t solely black and white.

Comparatively, Mara Wilson’s Susan feels more tragic. She isn’t happy knowing what she knows. She looks robbed of the opportunity to be a child. Which is a great consequence of the plot thread about her mother’s divorce. You feel that Wilson’s Susan wants to believe but doesn’t want to be hurt again. Which makes her character journey quite emotionally resonant.

Yet again it’s impossible to pick between the 1947 and 1994 versions. Wood is a likeable presence despite her stuck-up nature and her arc is more dramatically satisfying. Meanwhile, Wilson gives a layered, sympathetic performance that has you feeling more for her Susan. Thus both deserve to win the round.

Who has the best Supporting Cast?

Now we must review the Miracle on 34th Street films other players. And how well they perform their roles.

Miracle 1973s only notable supporting characters are Bill Schaffner (David Hartman), who is alternately charming and creepy because of how he acts around Susan’s mother. And Dr. Sawyer (Roddy McDowall), who is more sympathetic yet more over-the-top than his 1947 counterpart. Everyone else is entirely forgettable.

1994s Miracle fairs better. Elizabeth Perkins gives a great emotionally vulnerable performance as Dorey Walker. The humorously evil corporate underlings Jack Duff (James Remar) and Alberta Leonard (Jane Leeves) are fun to watch. And Robert Prosky’s Judge Harper elicits great sympathy with little screen time. The problem with the 1994 movie is that while people like Perkins and Prosky are good, other performers like Dylan McDermott as Bryan Bedford are very wooden. And characters such as the rival Santa (Jack McGee) border self-parody with their over-the-top actions. Resulting in the good elements feeling hampered.

The 1947 supporting cast is the best. Every character has motivation, feels different, and every actor perfectly fits their role. Maureen O’Hara’s Doris Walker is immaculate. An overly realistic working mother with a genuinely good moral compass. John Payne’s Fred Gailey is incredibly charming. Never wavering in his affection for the Walker’s and Kris despite the challenges he faces. Gene Lockhart’s Judge Harper is very funny. But his obsession with re-election also makes him feel like a real judge. And other players are very memorable. Like worrying store clerk Mr. Shellhammer (Philip Tonge). Dr. Sawyer (Porter Hall) the grouchy psychiatrist with marriage problems. And lovably naive Alfred (Alvin Greenman).

Through its mix of all-around great performances and writing, the original Miracle has the best supporting cast.

Which version tells the story best?

Finally, we look at each film’s story and ask which film tells the narrative in the best way?

All three movies have essentially the same story though with some differences. A man called Kris Kringle becomes the head Santa at a huge store after performing well during a thanksgiving parade. The woman who hired him is a single mother, raising her daughter, Susan, to be a realist. But Kris says that he is the real Santa. Susan wants Kris to prove this by getting her a house (and potentially a family). Which Kris accepts. Many people believe Kris is insane. When pushed too far he strikes out and is arrested and committed. To clear Kris’s name the mother’s love interest agrees to be his lawyer and prove Kris is the real Santa Claus.

The 1994 version’s plot differs the most. Focusing much more on corporate sabotage. With Kris’ disgrace used more as a corporate smear rather than because he is perceived as dangerous. The courtroom procedures are presented more realistically than other versions. And Susan’s wish is changed to something more conventionally unobtainable. That being a house, a dad, and a baby brother. Some of these differences are appreciated. E.g. treating the court scenes more realistically makes the pay off more satisfying. However, the contrast of these realistic elements alongside outlandish plot points such as Kris getting Susan’s mother married and the over-the-top depiction of corporate bosses makes the film feel tonally disparate. And can sometimes feel like the film focuses more on plot action than characters.

The only difference the 1973 film’s plot has from the original is the elaboration of Kris’ friendship with Alfred (Barry Greenberg). Unfortunately this film doesn’t give certain elements enough time to breathe. For example, the scene where Kris tells shoppers to buy gifts at other stores comes and goes rather quickly. Without really impacting the rest of the film. Because of this rushed pace, the story is hard to invest in and the emotional moments feel unearned.

Meanwhile, despite the 1947 film’s plot conveniences e.g. the mail solution coming into the story by chance, the plot flows quite naturally. Largely because the story feels dictated by the characters. With everyone’s motivation and personality informing their actions rather than the characters being forced along by the plot. The pacing is perfect. Each plot point has enough time to sit with the audience before it’s developed. And it weaves a sense of whimsy throughout while also not overdoing it. With the prime example being how Susan gets her wish through a mixture of playful leading from Kris, and Doris and Fred deciding to buy the house to start a new life. Making this version feel simultaneously grounded and magical.

The 1947 Miracle on 34th Street tells its story in a way that feels natural. While also being charmingly whimsical and grounded thanks to its character work and subtly effective writing.

Ignore the 1973 film at all costs. Apart from that, the 1947 and 1994 Miracle on 34th Street’s are good-natured defences of imagination and a push back against holiday pessimism. Both versions have iconic lead performances from Edmund Gwenn and Richard Attenborough. Furthermore, both have great child performances from Natalie Wood and Mara Wilson.

The 1994 version is also very entertaining. Updating the concept of defending Santa Claus to fit a modern audience. But with a well-rounded, memorable supporting cast, and a story that balances the fantastical with the mundane as well as being dramatically engaging, natural, and satisfying, the original 1947 Miracle on 34th Street deserves the title of the best version of the story. It’s a Christmas classic for a reason.

Read More: Who Did Better?: A Christmas Carol