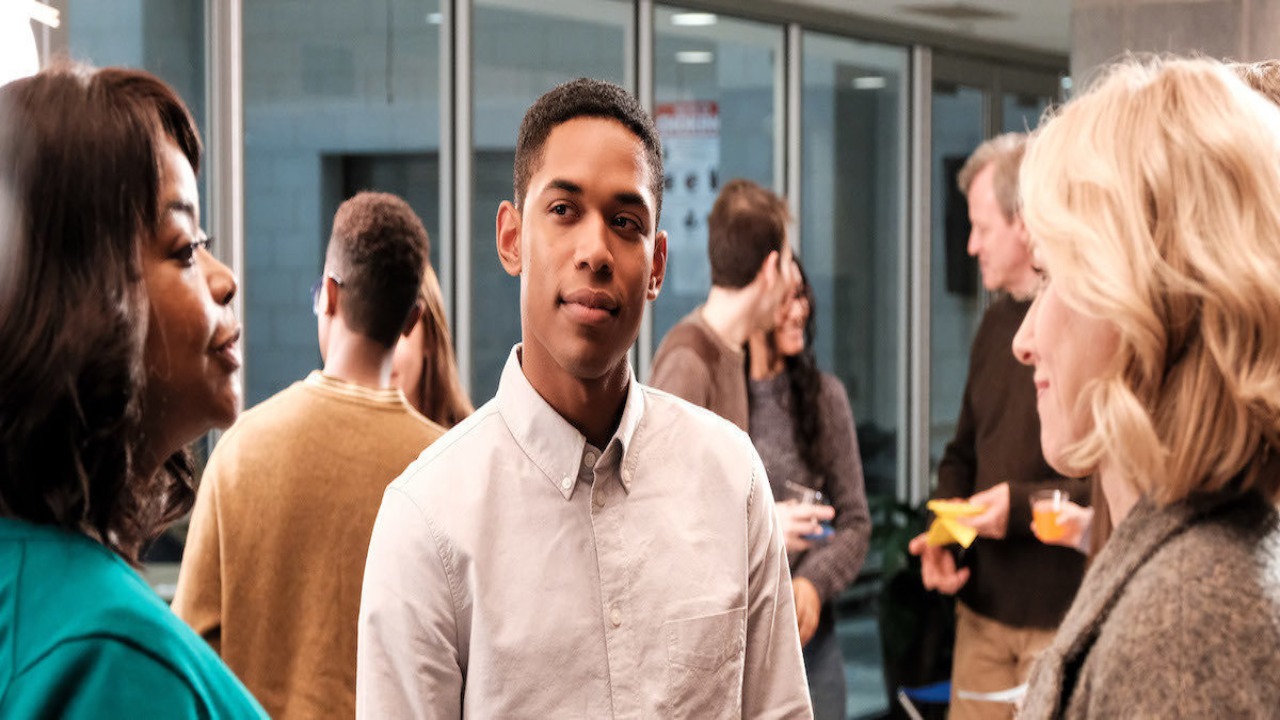 Becoming a teenager is never easy as it undeniably comes with a lot of responsibilities and expectations. Expectations that might be a little bit too high. Well, not for Luce. He seems like the most excellent student, public speaker, and star athlete. However, behind the perfect façade, is something darker is going on? That’s exactly what you will wonder the entire time throughout the newest film from director Julius Onah (Don’t Look Back, The Cloverfield Paradox). His Luce starts like any other family drama but it soon will turn into a mysterious, gripping and head-twisting thriller.

From the moment we meet Luce (Kelvin Harrison Jr.) we see the perfect poster boy for young black teenagers. After being a child soldier in Eritrea, he was adopted by Amy and Peter Edgar (Naomi Watts and Tim Roth). This was the start of a new life for Luce as he grew to become the perfect schoolkid: A great public speaker, filled with dreams and who’s there for everyone. Even his history teacher Harriett Wilson (Octavia Spencer) praises him. However, that will change sooner than expected. After discovering Luce’s essay discussing radical philosopher Frantz Fanon’s belief and the need for violence to oppress people, Wilson sees this as the first sign of Luce’s darker side. When she finds illegal fireworks in his locker, it’s time to ring the alarm bell and to warn his parents. Being loyal to their son, Amy and Peter don’t want to confront Luce immediately. However, that doesn’t go down well with his teacher Harriet Wilson and she’s not afraid to show that at all.

The friendly relationship between Luce and Wilson turning into a tense one doesn’t go unnoticed by Amy and Peter. They’re getting the feeling that Luce is keeping things for himself, especially when he withdraws himself from them. It’s just a matter of time before their love and compassion are taken over by doubts and mistrust. After all, you can take the kid out of the war but can you take the war out of the kid?

Harrison Jr. and Spencer are worth gold

You might think “why again a film about the difficulties black emigrants in America have to face”? Well, let us explain to you why Luce deserves its place during the upcoming award race.

First of all, Kelvin Harrison Jr. (JT LeRoy, Assassination Nation) delivers a talented and confident performance, and he certainly knows how to grab our attention. He’s stunning as the young man who’s trying to fight the prejudices and the expectations the society has and who at the same time has to find out who he wants to be. Thanks to his dazzling acting, we asked ourselves the “is he out for violence or is he being betrayed by the people the closest to him?” question every single minute.

Another reason why that question is constantly on our minds is because of the astounding performance of Spencer (Hidden Figures, The Shape of Water). We already saw her in a dark role in Ma but now she steps up her game even more. Spencer is immensely on-point as the history teacher who’s either overprotective or who has a hidden agenda. The scenes between her and Harrison Jr. are the beating heart of this movie.

The supporting performances from Watts (The Glass Castle, Chuck) and Roth (The Hateful Eight, Hardcore) are wonderful as well. The climax at the end is a masterpiece by the entire cast.

From family drama to an intense thriller

What was so intriguing about this movie is the way the biggest story and the small mysteries are unravelling. One moment, you will feel sorry for Luce but the other, you might think that he is a violent psychopath in the body of a saint. What about Wilson, the strict teacher who finds it necessary to protect her school, no matter how many dreams of young people are being shattered? Will the parents stand by their son unconditionally or not? Well, you might find it out after watching this suspenseful film.

That Luce goes from predictable family drama to an intense thriller is also thanks to the stunning cinematography from Larkin Seiple (Swiss Army Man, Cop Car) and the poignant score from Geoff Barrow and Ben who both worked together on Free Fire and Ex Machina. They play in the hand of the genre expectations but without losing that thrilling and mysterious effect.

Sitting on the edge of your seat

There’s no denying that Luce is an intense and solid thriller. Not only the most delightfully narrative but also the great performances (from both lead and supporting actors), the suspenseful cinematography and the bombastic score make sure that you will be sitting on the edge of your seat the entire time.