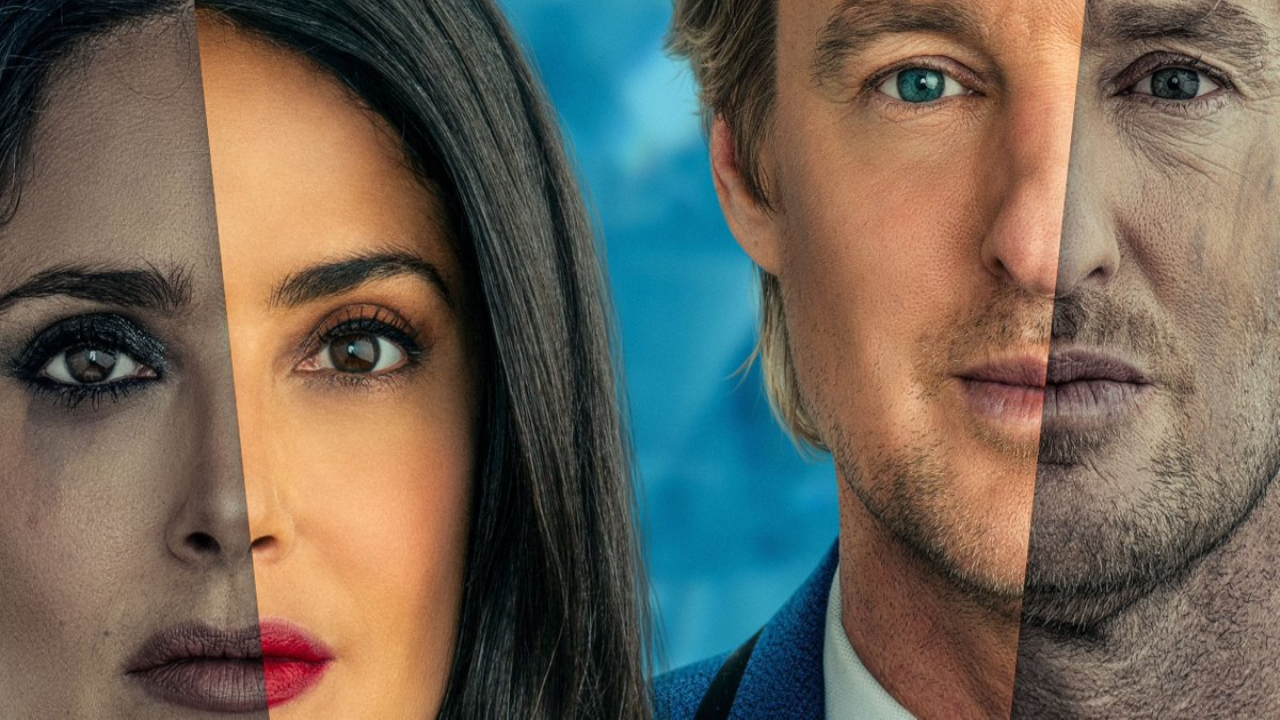 While finding love can happen in so many forms (via parties, mutual introduction, dating applications, etc.), it never comes easy. There will be doubts, the insecurity but also the happy feelings and incredible and unforgettable moments. But can you only imagine what finding love must be and feel like in a computer-generated world? Well, thanks to writer/director Mike Cahill and his Bliss, you can now. Let us tell you, it’s much more different than what you would expect. Whether that’s good or bad, is something for you to decide.

Love comes when you don’t expect it, and that’s certainly the case for graphic designer Greg (Owen Wilson). After being divorced, fired and having to deal with losing his job, he finds himself at the bar drinking away his sorrows. Luckily for him, his day becomes much more intriguing when the beguiling Isabel Clemens (Salma Hayek) steps into his world. A world that will change drastically.

Isabel lives on the streets and takes Greg around the city in a way that will open his eyes forever. It makes Greg questioning his actions, the relationships and his future. Even more so when Isabel tries to convince him that the polluted and sad world they live in is a computer simulation. At first, Greg is very sceptical, but when he starts to see the life through Isabel’s eyes, his mindset (literally) changes in ways he could have never imagined (and neither could you)…

All over the place without any direction

There’s absolutely nothing wrong with a movie in which many different worlds come together. It can be captivating and gorgeous, and if you want to add romance, you can also focus on human emotions. Sadly, that’s absolutely not the case for Bliss. One of the main reasons for that is the lack of direction. While we get it that in a movie about two different worlds, you undoubtedly have to make some sudden jumps from one to another, the jumps in Bliss are just too big. At first, there’s a lack of background information but throughout the movie, you just get too much information. It creates a confusing vibe. You will probably feel as confusing as Greg is during most of the part of this film.

Sadly, that confusing feeling is the only emotion the audience will be able to connect with. While this movie involves romance, a broken father-daughter relationship, the dramas of life and human feelings, it’s just impossible to connect with the characters due to the baffling storylines. There’s just too much going on, and because of that, the human feelings don’t come out fully. While Wilson (The Grand Budapest Hotel, Midnight in Paris) brings feelings such as anger, fatherly love, defeat, curiosity to the screen, Hayek (Frida, The Hummingbird Project) offers darker emotions such as hatred, despair, lost and combines it with an extremely high fighting spirit, they can’t keep the viewers engaged due to the tiresome storyline.

There’s one element that’s continuous throughout this movie, and that’s the dark cinematography of Markus Förderer (Stonewall, Finsterworld). The black and grey colours and shadow he uses to heighten the “doom and gloom” vibe of the story contribute to the movie’s bewildering feeling. There aren’t many other colours in this movie, but if Förderer uses them, he does it beautifully. Just don’t expect many of those scenes in this movie.

Not as much bliss as you hoped for

After focusing on human relationships and sci-fi in I Origins and the changing society in Another Earth, Cahill decided to combine both worlds’ best elements. It’s just a shame that, despite the intriguing premises and fitting cinematography, this movie doesn’t provide much bliss. This is because of the average performances, the repetitiveness of the storyline and the overall confusing vibe.

Bliss is available via Amazon Prime from the 5th of February