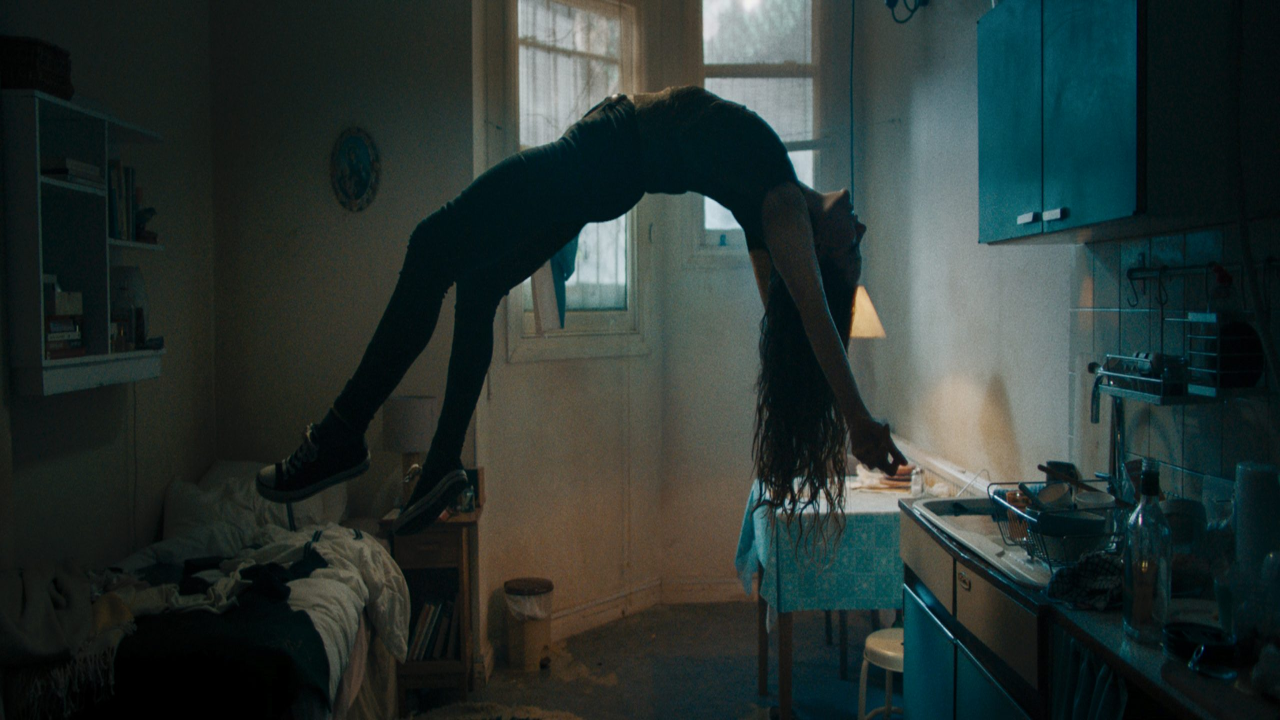 If you’ve been following writer-director Rose Glass, then you know that she’s not afraid of putting strong emotions out there. A young couple and their obsession (The Silken Strand), two people living in isolation together (Storm House) and two lonely neighbours growing closer (Moths). Yes, all her short films focus on human feelings. She’s doing the same now in Saint Maud, her first full-length film, but she adds a massive horror twist to the story. The result? A unique and tense movie in which Morfydd Clark excels.

Heaven and hell are mixed up

Being a nurse or caretaker is one of the hardest jobs there are so we have the utmost respect for any woman or man out there doing the job. They take care of us but who’s taking care of them? Well, Maud (Morfydd Clark) is being taken care of by her God. According to her, He’s navigating her to her ultimate goal and is with her along the entire (twisted) way. Now He guides her to her next patient called Amanda (Jennifer Ehle). While former dancer Amanda is ill, she still enjoys life by doing what she loves: smoking, drinking and enjoying the company of other people.

Maud and Amanda are the opposite. Light versus darkness. Monotonous life versus vibrancy. Firm believer vs atheist. Despite their different lifestyle, the women grow close to each other. It all seems to go fine. Amanda brings enjoyment into Maud’s life, while Maud teaches Amanda about God. It’s clear that Maud is excessively devoted to God as he takes over her life completely. However, it’s not only figuratively speaking. No, he’s also taking over her own body. Once that happens, the way to the light becomes extremely dark as we’re pretty sure that the Bible doesn’t include self-harm, bloodshed and jealousy.

When making a movie, as a director, you always have to make sure that the audience can connect to your film in one way or another. In this film, Glass gives you the time to step into the shoes of Maud (although maybe that’s something you don’t want to do after all), get to know her lifestyle and her dedication to her patient and to God. Therefore Glass opted for a slow start and a low-key middle.

A real connection is established between the audience and Maud during the first hour, but sadly, that’s also the reason why the ending feels rushed. A lot is happening towards the end, and so it feels like as the movie is a bit unbalanced. It maybe would have been better if the start and the middle come to life a bit more or that the ending was stretched out. Nevertheless, the story of Saint Maud is a very unique one. One that’s brought to the screen stunningly by both the cast and crew, led by the magnificent Clark.

When watching Saint Maud, it’s clear that this movie must have been a very demanding one, both physically and emotionally for Clark (The Personal History of David Copperfield, Crawl). Whether it was Maud going through different emotional phases or devoting her body to God, we can still feel her pain thanks to Clark’s knockout performance. Clark also guides us to the story via a dark voice-over, and because of that, Maud’s feelings become even bigger.

Ehle (Vox Lux, The Miseducation of Cameron Post) her portrayal of the flamboyant but also the broken Amanda is big in its fragility and emotions. The chemistry between Ehle’s and Clark is the glue that holds the whole movie together. Even the more supporting roles coming from Lily Frazer (The Gentlemen, Tomorrow) as Amanda’s lovers, and Lily Knight (Their Finest, Brand New-U) as Joy, a young woman who knows Maud from the past and thanks to who we get to learn more about Maud’s dark past, are lovely to watch.

The crew brings even more darkness to Saint Maud.

Not only the stunning cast make from this movie an entirely captivating one to watch but also the crew certainly adds a lot of darkness to Saint Maud. First of all, there’s the terrifying and terrific score provided by Adam Janota Bzowski that certainly brings that haunting vibe to this movie. There’s also the tremendous cinematography from Ben Fordesman who always finds a way to put a sinister element into the scene. Saint Maud is for both men their full-length feature debut and what a debut it is!

We were lucky enough to have seen Saint Maud on both the small screen during the virtual press screening and in the cinema. Let us tell you: there’s only one way to watch this bold movie in the best way, and that’s by seeing it on the big screen. Not only for the genuinely well-balanced cinematography, the horrifying score but most importantly for the impressive performance by Morfydd Clark.

Saint Maud will be released in U.K. cinemas on the 9th of October.