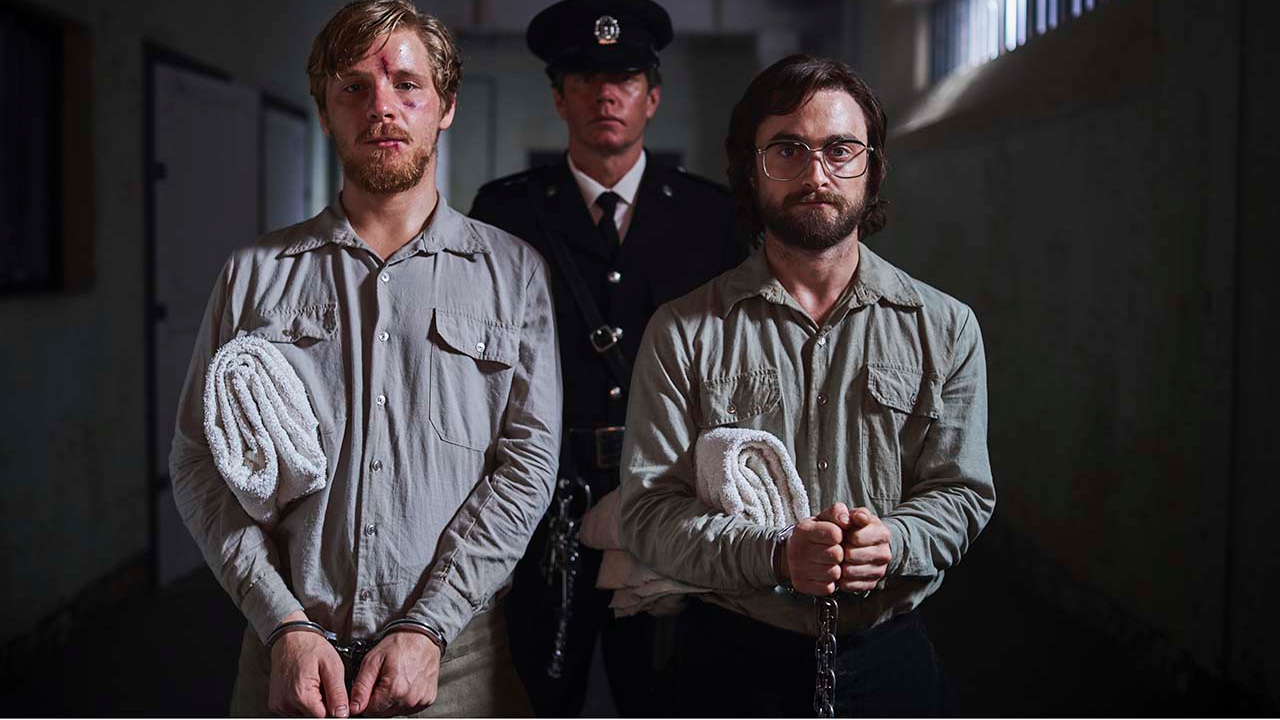 How apartheid in South Africa changed the lives of many people is undeniably clear. Not only black people but also white people who weren’t afraid of showing their hatred towards the system were locked up, tortured and murdered. Just because they didn’t believe in a society that was just based on race. Now, director Francis Annan (Woyzeckis) is taking the real story of two political captives to the big screen in his Escape from Pretoria.

It’s all about finding the right key

Tim Jenkin (Daniel Radcliffe) and Stephen Lee (Daniel Webber) are two young men and friends living in Africa during the Apartheid. They’re both white and so you might think that their lives’ mission is ruling over the black people in their community. Well, nothing could be further from the truth. Jenkin has a black girlfriend and both men release political pamphlets and support for the black society. Sadly, for Tim and Stephen, the law is ruling with an iron fist and due to that, the men are being sentenced to prison for many years just because of their political views.

Their freedom might have been taken away but not their spirit and hunger for justice. From the moment they set foot into jail, they were already planning their escape. There are many locks (too many?) to open, too many guards to hide from and too many unpredictable elements to take into consideration. Luckily for Jenkin and Lee, they get help from their fellow prison mates and soon their ingenious plan is put in motion. Keys are being made, guards are being distracted and inventions are being fabricated. Will their determination, craftsmanship, and lust for freedom be the way out for the two men or will the prison bars be part of their lives forever?

Not the ordinary escape thriller

This movie is based on the book written by Jenkin himself and because of the Escape from Pretoria feels very personal and up-close. Together with his co-writers L.H. Adams and Karol Griffiths, director Annan certainly preserved that unique touch but also added some very entertaining and wonderful cinematic elements to it.

Not only did the director and writers want to make sure that this movie is an incredible homage to the strong men living in the age of repression, but also the actors themselves certainly wanted to honour their characters in the best and authentic way possible. First up, there Radcliffe (Guns Akimbo) who puts on great and solid performance. He embraces the courageous, determined and intelligent elements of his characters and makes them his own. In a heist film, performances could be big and bold and over the top (most of the time combined with special effects) but not in this film. The subtleness and the ‘small’ acting are Radcliffe’s strengths, even more so during the climax of this film. Also, the scenes with the key and chewing gums were just too brilliant not to mention.

His acting might not be as captivating and emotional as the one of Radcliffe but that doesn’t mean that Webber (The Dirt) can’t delight us. He adds much more emotions to this movie with his compelling and steady performance.

They get great support from Ian Hart (Mary Queen of Scots) as the social campaigner Denis Goldberg and Mark Leonard Winter (Measure for Measure) as Alex Moumbaris. Hart brings many witty and clever moments to Escape from Pretoria and shows us in a crafty way what happens when you don’t take your life into your own hands. No matter how many obstacles you have to overcome. The most emotional story arc in this movie is Moumbaris’s as it’s about him, his son and the injustice of his family. Winter’s performance is packed with human emotions. From sadness and doubts to determination and happiness in dark times, we all get to feel them thanks to Winter’s moving performance.

While there’s absolutely nothing wrong with the performances of the cast, it’s the craftsmanship of the crew that excels in this movie. We certainly want to applaud the great work of cinematographer Geoffrey Hall (Australia Day). The way he uses light, darkness, and shadow is just magnificent and oozes that tense vibe. If you add excellent sound and music of the music department to that, Escape from Pretoria becomes a thriller that will have you on the edge of your seat. Those approaching footsteps, the sound of the creaking wooden floors or the noise of the keys turning in the locks give you the chills many times.

Escape from Pretoria deals with topics that are still very present such as equality and justice. It’s certainly not afraid of adding thrilling and entertaining elements to a real-life story. The result is a nail-biting, marvellous and cleverly made thriller.

Escape from Pretoria is out now in UK cinemas