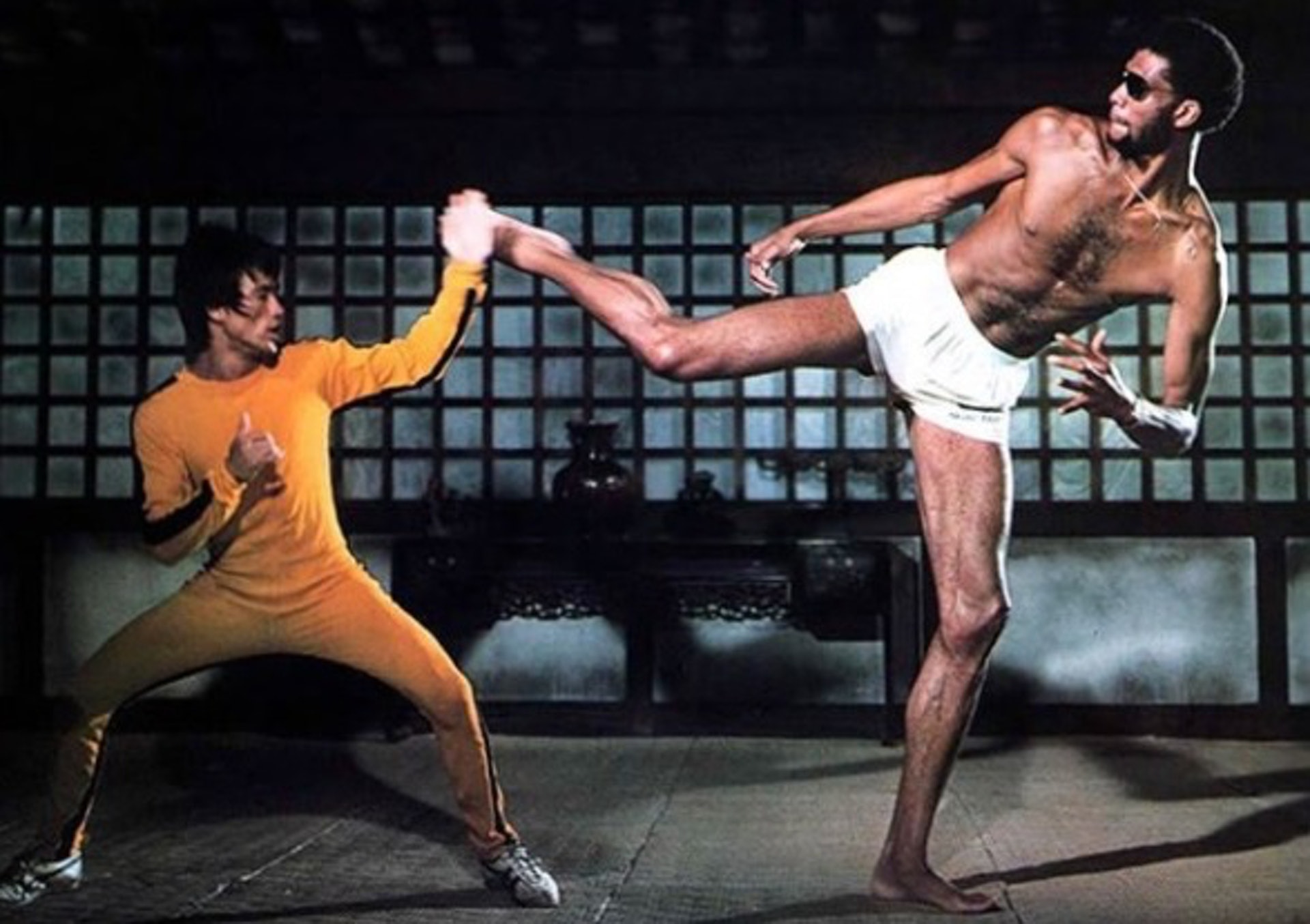 In 1972 Bruce Lee started production on Game of Death. In addition to writing, producing and directing, Lee also starred in the film as Hai Tien. His character would fight his way up through five levels of a pagoda filled with deadly martial artists and collect the treasure at the top. During filming, Lee took a break to star in Enter the Dragon. Unfortunately, Lee passed away before production could resume, with most of the film unfinished.

Of the footage that was filmed, the highlight is undoubtedly the fight with Mantis, played by Lee’s student and NBA Basketball player Kareem Abdul-Jabbar. An iconic fight featuring a screen legend, but also a collaboration between friends.

The Tower From Power

Even those that don’t follow Basketball, will likely recognise Abdul-Jabbar’s name. Regarded as one of the best NBA players, he was voted Most Valuable Player (MVP) six times. Establishing himself as one of the league’s top scorers with his signature “Skyhook“, he played 20 seasons, 18 of which he helped his team to the playoffs and reached the final of 10. He currently ranks second on the list of “Greatest NBA Players of All Time” (Behind Michael Jordan). Off the court, he has made several cameos in film and TV, such as Airplane!, and written several pieces on issues like race and religion. In 2012, he became a cultural ambassador for the US.

Whilst studying at UCLA, he took up martial arts in his spare time. A friend recommended he studied with Lee and introduced them. They quickly formed a strong friendship in addition to their student/teacher relationship over the 4 years they trained together. Abdul-Jabbar credits this training as the reason he was able to play with so few injuries over his 20-year career. They bonded over their shared philosophies, and desire to see better representation in media. He recently criticised Lee’s portrayal in Once Upon A Time… In Hollywood, mentioning that Lee always turned down challengers as he had nothing to prove.

Lee, who became known to American audiences for his role as Kato in The Green Hornet, had to fight to use his martial arts skills on the show. When he was allowed to use them, he was too fast for the cameras and had to fight in slow motion. The series was cancelled after one season and growing frustrated with playing supporting roles, he returned to Hong Kong. Kato proved to be the star of the show there, and he used this as leverage to star in The Big Boss and Fists Of Fury which were both huge hits. This gave him complete control over Way Of The Dragon as writer, director, producer and choreographer. Along with increased control, the film also got a US release. His battle with Chuck Norris is regarded as one of the best in martial arts and film history.

Next Lee began work on Game of Death, although this would be postponed to allow him to star in Enter The Dragon. Six days before it’s release, Lee passed away, the film became one of the highest-grossing of 1973 and sparked a wave of martial arts tv shows. However, he had only filmed some parts of Game of Death. It was completed, controversially, using an (unconvincing) look-alike and double. Due to Lee’s death and the lack of footage, the plot is vastly different from the original project.

The original plot was much simpler and would feature Lee’s character Hai Tien battling through a pagoda. Each floor is guarded by skilled opponents, with a treasure at the top. The film would follow Hai as he was forced to enter the pagoda and battle his way up the five floors.

Most of the guardians were to be played by friends and students of Lee’s, along with Abdul-Jabbar, roles were also planned for Taky Kimura, Dan Inosanto and Robert Baker. Before production was paused, scenes for the third, fourth and fifth floors were filmed. The film was intended to showcase Lee’s personal philosophies of martial arts, with each fighter being defeated with a distinctive weakness or flaw. With such creative control, Lee chose his former students roles himself.

Lee is still regarded as one the most influential martial artists ever, and responsible for introducing martial arts films to a much wider audience, subsequently launching the careers of stars like Chuck Norris and Jean-Claude Van Damme. Despite the final film being unfinished, the fight with his former student is a fitting tribute to his legacy.