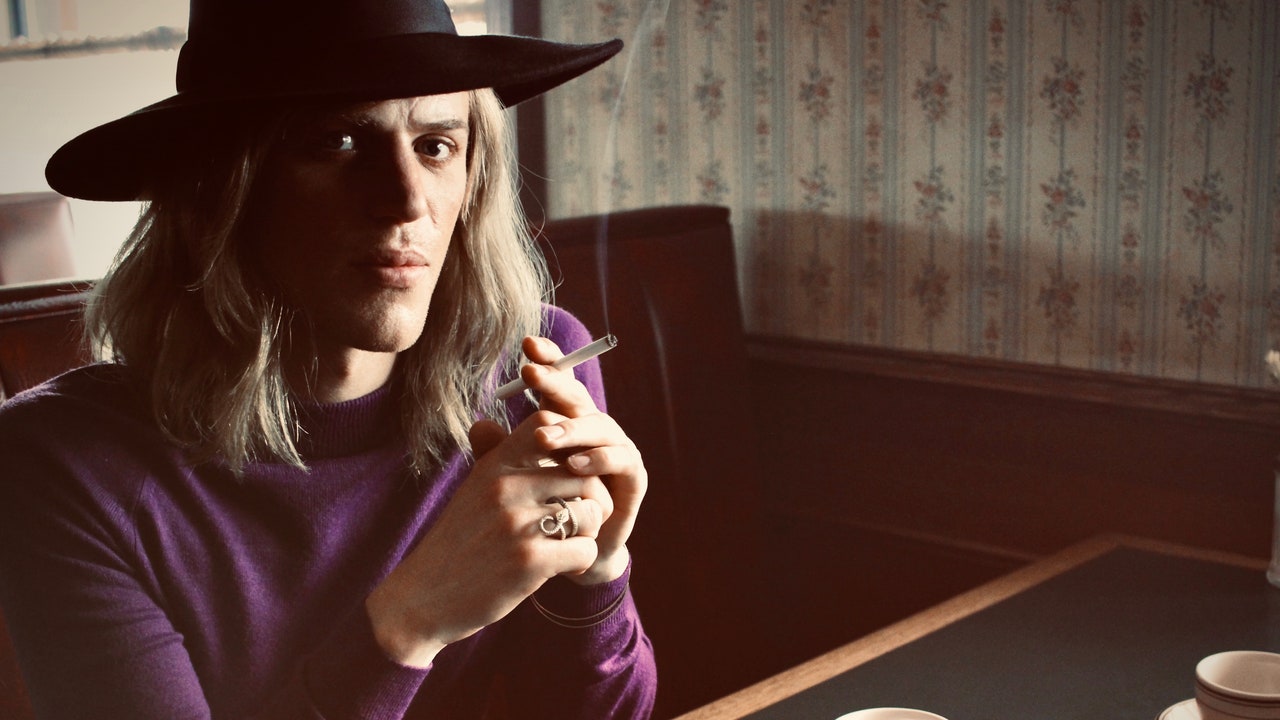 10th of January 2016. The day that the music industry stood still as we had to say goodbye to one of the greatest and most influential musicians, David Bowie. Whether you stepped into Bowie’s eclectic world right at the beginning with The Man Who Sold the World or more towards the middle because of Let’s Dance you know that the musical chameleon would have a massive impact on the fans and music industry. Even after his death, Bowie’s influence is still visible and not only in the music industry. During the past few years, we had director Henry Hey bringing Bowie’s iconic characters and songs to life in the theatrical version of Lazarus, and now we have the biopic Stardust by director Gabriel Range. While that first one excels in every way possible, the latter doesn’t.

What’s a musician without music?

When seeing a movie about David Bowie, you would expect songs such as Life on Mars?, Rebel Rebel and Under Pressure. Well, you will get none of that as Bowie’s estate didn’t want his music to be used in this film. However, that didn’t stop Range from creating a wonderful story. Together with co-writer Christopher Bell, he tells the story of the young David Bowie (Johnny Flynn) who’s trying to get his international breakthrough. After being rejected by many radio stations, record labels and concert promoters for being too rebellious and too different, Bowie’s career seems to come to a permanent standstill. However, he gets one more chance as his manager sends him on a solo promo tour in America. Both Bowie and his pregnant wife Angie (Jena Malone) think that this will be the beginning of an internationally successful career.

However, their dream is being shattered when the trip doesn’t turn out exactly how they want. Once arrived in America, Bowie learns that there’s no tour and that he can’t perform any of his songs. No tour, no fans, no songs but there are still the promises of his publicist Ron (Marc Maron). While playing covers from other iconic artists in very unusual venues, Bowie also visits the many radio stations. Sadly, they don’t welcome this remarkable, withdrawn, insecure, sarcastic and peculiar artist with open arms which has a massive impact on Bowie’s mental state.

It becomes even worse when he starts to ease the rejections with booze and drugs. The more he experiments with his genderbending outfits, the substances and his ground-breaking music, the less he’s being accepted by the music industry. Will this tour ends in a glorious musical career or will Bowie’s life spiral completely out of control?

Well, we all know what impact the American trip had on Bowie. It resulted in selling 100 million records worldwide, getting a place in the Rock and Roll Hall of Fame and becoming the “Greatest Rock Star Ever” according to Rolling Stone. Sadly, we can’t praise this movie as much as we can praise the iconic artist himself because Stardust has (too) many flaws.

While the writers were able to create a story that doesn’t include any of Bowie songs, the absence of the music is the reason why the movie can’t captivate the audience to the fullest. We see Flynn playing some covers that Bowie performed such as The Yardbirds’ I Wish You Would and My Death from Jacques Brel but you don’t get that big final that could have been reached by including Starman or The Man Who Sold the World.

If you want to make a biopic about a rock star, then as a director you need to have a lead who can pull it off. Not only musically but also charismatically. In an interview at the Raindance Film Festival, Range mentioned that while Flynn (Beast) might not look as Bowie, he certainly has the right charisma. Well, we agree with that. Flynn isn’t the spitting image of Bowie, but when you put him in the perfect clothes and the right light, then you will get a silhouette that could be the one from the man himself. During many moments, Flynn’s performance feels a little bit too forced, but when Bowie hits the stage, we see Flynn giving a much more open, charismatic and entertaining performance.

Maron (Joker) brings with his genuine and emotional performance much warmth, vividness and personality to this movie. Malone (Nocturnal Animals) is a little bit underused, but she’s still capable of capturing that fierceness and boldness from Angie beautifully.

Don’t expect it to be another Rocketman

If you’re going to check out Stardust, don’t expect it to be another Rocketman or Bohemian Rhapsody. No, this movie works much better if you see the story as one about a musician and his publicist trying to get his career off the ground instead of one about the great musician we all know. If you’re a Bowie fan, then you might be disappointed after seeing this movie, but if you want to enjoy an emotional, easygoing and clever film, then Stardust is one you should see.