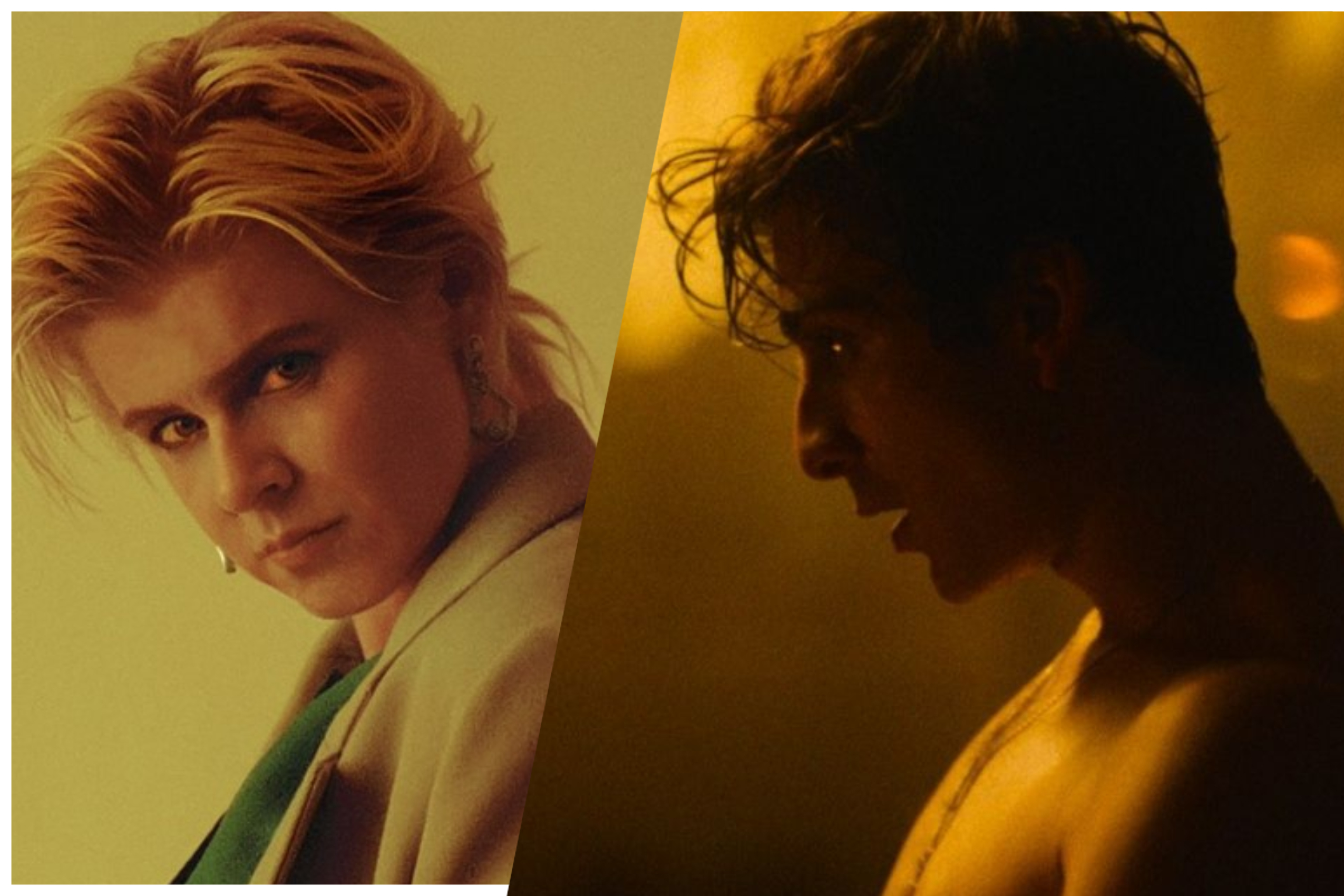 No, you’re not going to get what you need. Baby, I have what you want. Merab stands, cigarette in hand, topless, a crucifix on a chain around his neck. Come get your honey. Orange light floods the conservatory. Irakli’s dark eyes watch him as he puts on a white hat, adorned with feathers. I got your honey, baby. Then the beat kicks in. Every colour and every taste. Every breath that whispers your name. It’s like emeralds on the pavement. Merab dances, his body in perfect sync to the bass of the track. Irakli laughs, taken in by the jovial smirk on Merab’s face. The dance is part seduction, part game. It’s sexy and fun all at once. Then the music cuts.

And Then We Danced, a film by Levan Akin, is a tender story of first love between two men in the world of Georgian folk dancing. Upon its release in Georgia, it was protested and considered a ‘moral threat’ by conservatives in the country. With this in mind, Robyn’s 2018 dance hit ‘Honey’ accompanying this tantalising seduction feels even more potent. The link between queerness and music has long been noted, from the adoration of icons like Cher, Madonna, Barbra Streisand, and Diana Ross, to the likes of Beyoncé, Carley Rae Jepsen, and, of course, Robyn, whose music regularly reverberates of the walls in queer night clubs today. Music, in fact, is one of the first-time’s queer people felt they had some semblance of power, of having a say in something. In the 1970s, to get a disco track to be a hit, the song had to be playing in gay bars. This connection, to the upbeat sound and lyrics about oppression and loss, scared white heterosexual executives so much they that formulated a consigned effort to invalidate its success, and thus entered the ‘disco sucks’ crowd.

Music and cinema have also always been intrinsically linked. From silent movies accompanied by live pianists to the use of the ‘Unchained Melody’ in Ghost to Mr Blonde’s mischievous dance to ‘Stuck in the Middle With You’, many of the most famous scenes in film have been set to now equally renowned music. In queer cinema, however, the relationship between the music and the characters feels more tangible, something that works on multiple levels. In 1970, Kenneth Nelson performed a truncated version of gay icon Judy Garland’s ‘Get Happy’ in The Boys in the Band. Garland’s popularity amongst the gay community is practically unparalleled, the phrase ‘a friend of Dorothy’ was historically used to discreetly describe gay men in reference to Garland’s most famous starring role. In 1989, Longtime Companion, the first studio movie to discuss AIDS, has a character lip-sync to the Dreamgirls cast album while unpacking boxes. The Broadway musical, a roman-à-clef based on the story of The Supremes, was a bit hit in 1981 and was recently described as having a ‘piercing message of self-empowerment and self-love’ that appeals to queer folk, both then and now. 1994’s The Adventures of Priscilla, Queen of the Desert features a whole host of disco and camp classics on its soundtrack as three drag queens travel across the Australian outback in a supped-up bus. In essence, the music acts as the sound of liberation, freedom, and unabashed queerness.

Often, music in queer cinema works not only as a soundtrack for the experience of the LGBTQ+ characters on-screen, but acts as a signpost to the queerness that exists beyond the edge of the frame. Céline Sciamma’s Girlhood features a pivotal moment set to ‘Diamonds’ by Rihanna, a current icon for the gay community, idolised for her no-bullshit attitude and pop music prevalence. Or Xavier Dolan’s use of Lana Del Rey, famous for her musings on deadbeat men and ethereal ‘sad girl’ energy, in his Palme d’Or, winning Mommy. Luca Guadagnino not only featured new songs by queer-friendly Sufjan Stevens in his coming-of-age story Call Me By Your Name but also included ‘Love My Way’ by The Psychedelic Furs, a song that was written for those who were struggling with their sexuality in the eighties. While Desiree Akhavan’s tale of youths in conversion therapy, The Miseducation of Cameron Post, sees a moment of jubilance and freedom to the 4 Non Blondes song ‘What’s Up?’, whose lead singer, Linda Perry, famously performed with the word ‘Dyke’ scribbled on her guitar at the 1994 Billboard Music Awards.

That brings us back to Robyn, the Swedish queen of Europop and recent RuPaul guest judge, who has risen to be a substantial icon for the queer community. She was recently described, by Tom Rasmussen for Another Man, as a woman who ‘gets it’, ‘it’ being the queer experience. Her lyrics cater to the ‘outcast’ and capitalise on ‘the exact tension between the agony, and the ecstasy inside the agony.’ Her music understands the unrequited, the existential, the messy, the dramatic, the murky areas between the lines, and as such appeals to a lot of what makes queer desire so specific.

‘Honey’, which has been described by Robyn herself as being about a sweet and gloopy ‘state of mind instead of the actual substance’, features lyrics of delicate and sensual longing, a desire to provide and open up for a lover. In Merab’s case, he’s been taken in by the dark and brooding Irakli, his passion is seeping from his skin, his longing visible in each pained stare. In this moment, as the only two people awake late at night, they share an intimate moment so palpable, so crammed with sexual tension, that heart rates will pound along to the electronic beat.

And Then We Danced is the latest in a long line of queer films that utilise that relationship between LGBTQ+ people and music, specifically their connection to the content and power that music historically brings. So often cinema, like music, is an act of translation. Queer people find a way to relate to the stories on screen that rarely represent them, but in those that do, it feels exciting and even liberating. For a soundtrack to acknowledge that musical connection is like acknowledging the whole notion of queer struggle and how music has been central to queer lives for years.

And Then We Danced is available to rent / download now

Also Read: “Birds of Prey” and the Curse of Being Casually Queer