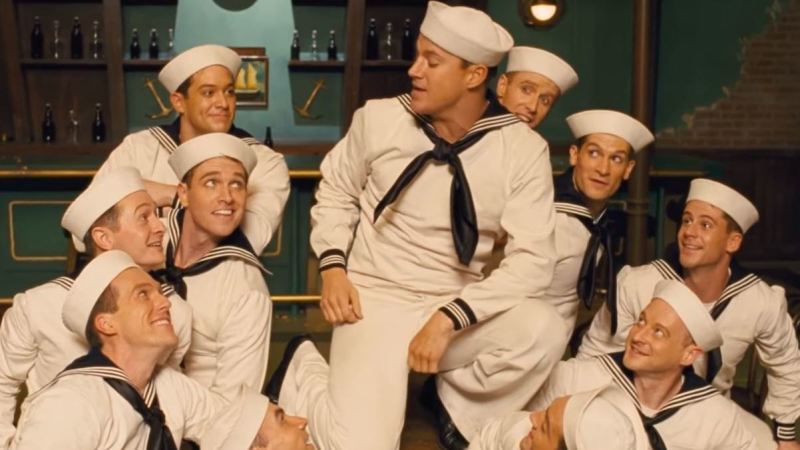 Filmmakers love making films about filmmaking and while there may be some self-aggrandisement going on, many of these films are brilliant. Tarantino’s Once Upon A Time…In Hollywood is the only the latest.

Spoiler Warning – contains mild spoilers for A Cock And Bull Story, Hail Caesar!, Adaptation, For Your Consideration and The Life Aquatic with Steve Zissou.

This is one of my favourite films and one that should be far more famous. Directed by Michael Winterbottom and starring the wonderful Steve Coogan and Rob Bryden, the film is part adaptation of the supposedly unfilmable book The Life and Opinions Of Tristram Shandy, Gentleman and a fictional glimpse into the making the film. Steve Coogan and Rob Bryden play versions of themselves (as well as characters from the book) and the comic chemistry between the two is amazing. Whether it’s Steve demanding his shoes be built up so he will tower over Rob or the argument between Steve and Rob about what they should call Rob’s part (both agree it’s not a cameo) the battling of egos is endless. We see the annoyed experts brought in for their expert opinion only to be ignored, Gillian Anderson whose part in the film expands or contracts depending on Coogan’s insecurity and Winterbottom himself makes an appearance discussing with others what the “point” of the film is, or perhaps what is the point of any film.

The Coen Brothers loving tribute to the Golden Age of Hollywood is perhaps not their best film but is certainly lots of fun. Studio fixer Eddie Mannix (Josh Brolin) constantly runs around sorting out problems ranging from poorly timed pregnant starlets to kidnapped leading men. It is an exhausting job.

Despite having a strong ensemble two actors particularly shine. First, there is Channing Tatum as Burt Gurney, an all singing and dancing musical superstar (I couldn’t help but think Tatum’s talents are wasted in 21st Century Hollywood). Then we have Alden Ehrenreich as Hobie Doyle – an actor who is brilliant as a cowboy but has to turn his hand to more subtle acting, leading to one of the funniest scenes in Coen Brothers history as Hobie struggles to get his words right.

While there are numerous stories going on in the film Mannix has several meetings with a potential employer – Lockheed, offering him more money and more opportunities but would involve him working for a company who spends a lot of time building stuff to end the world. There is an interesting struggle in Mannix about not only what is the right job but what is the right thing for him to do.

It’s easy to forget that there was a time when Nicolas Cage was considered a great actor and this, in my opinion, might be his best performance. Cage plays both Charlie Kaufman and his twin brother Donald Kaufman and is essentially about Charlie struggling to write a movie. It’s important to know that Adaptation is written by the real Charlie Kaufman (there is no real Donald) about his struggle to adapt the book The Orchid Thief. Charlie is a successful writer but Donald is more laid back and enjoys life more, fitting in easily whereas Charlie struggles in social situations.

Charlie’s problems with writing the screenplay goes so far as to stalking the writer of the book, played by Meryl Streep, and taking the famous Robert McKee story seminar- only to be lambasted by McKee. These attempts at improving the screenplay have mixed results at best.

After going after rock music, folk music and…dog grooming Christopher Guest turned his eye to Hollywood. For Your Consideration is the bizarre story of the film Home For Purim and how “Oscar buzz” turns attention on the film and its actors. Guest assembled many of his regulars with great performances from Parker Posey, Fred Willard and especially Catherine O’Hara.

This slim possibility of success throws the production into chaos as egos begin to grow and changes start to be made to the film to make it more accessible.

Not only does the film focus on the myriad problems of making a movie but also the ghastly world of Hollywood entertainment journalism and reminds you that the people who will celebrate you one day will laugh at you the next.

The Life Aquatic With Steve Zissou (2004)

Bill Murray plays aquatic explorer and documentary filmmaker Steve Zissou who lives in a typically eccentric Wes Anderson directed world. The film focuses Zissou following on from the death of his close friend and colleague at the hands of a “jaguar shark”. Zissou’s next film will be about him hunting down and killing the shark and by his own admission is purely for revenge.

Zissou is down on his luck and the glory days of his films are far behind him with many people seeing his own new as nothing more than cashing in on the death of his friend. Thrown into the mix is the son he never met, Ned (Owen Wilson) who suddenly enters his life, and journalist Jane Winslett-Richardson (Cate Blanchett) as well as annoying money men, pirates and an extremely irritating rival explorer the far more successful Allistair Hennessey (Jeff Goldblum).

So, why make a film?

Most of these films show filmmaking as an exhausting, frustrating and difficult enterprise with the possibility of making something good or that bears any resemblance to your original idea as remote. So, why bother? Because you just might make something great.